Once the seat of Viking raiders and later a major north European power, Denmark has changed into a modern and wealthy nation. Denmark contributes in the general political, economic integration of Europe. It joined NATO in 1949 and the EEC (now the EU) in 1973. However, the country has opted out of certain elements of the European Union’s Maastricht Treaty, including the European Economic and Monetary Union (EMU), European defence cooperation, and issues concerning certain justice and home affairs (the-world-factbook, 2015). The currency in Denmark is thus still the Danish Krone (DKK) and not the Euro although the Krone is closely attached to the Euro (danish-business-and-economy, 2015).

From the year 2004 to 2014, the Gross Domestic product and Gross National Product for the country have improved tremendously. GDP measures the income of a particular nation and the income of that country within a period. The GNP for Denmark per capital income has also increased tremendously for the past years (Economic Research, 2015). 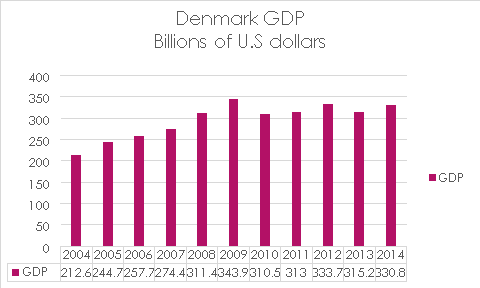 In the year 2010, the GDP for the country was the highest than the previous years and the following years. The government has successfully implemented the macroeconomics tools and has achieved the goals and objectives, and the lagging on the economy adjustment was over. In order to achieve these plans, in the year 2007 when the country suffered from depression, the government undertook some measures (Economic Research, 2015). It introduced the capital expenditures that saw a lot of people employed which increased the per capita income. The commercial banks kept the interest rates at lower so that a lot of people accessed the funds to startup businesses and invested in other sectors. Though after the year 2009 the GDP fell a little bit, the fall was significant as the market and the businesses were getting saturated. 2010 and 2011 can be seen as the recovery after the recession and an improvement in the GDP. Then we notice a good growth the year after, before falling again in 2013. The GDP in 2014 had a good year in 2014 with a good recovery which put it 330.8 billion U.S.

This entry shows GDP on a purchasing power parity basis. GDP for Denmark will not fall below 56,000 dollars unless the world incurs another great depression. 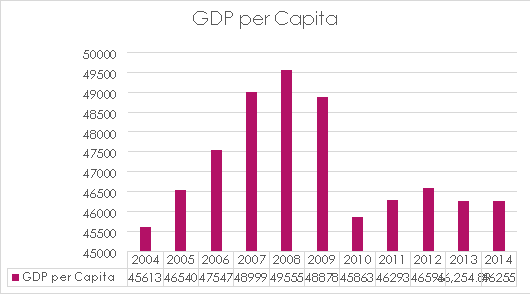 Gross national product (GNP) is the value of all final goods and services produced within a nation in a given year, plus income earned by its citizens abroad, minus income earned by foreigners from domestic production. The Factbook, following current practice, uses GDP rather than GNP to measure national production. However, the user must realize that in certain countries net remittances from citizens working abroad may be important to national well-being (the-world-factbook, 2015). 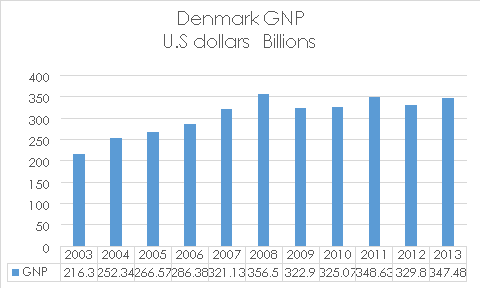 The GNP, which is also the GNI of the country, has increased and performed very well since the year 2004. During the year 2009 when the GDP was at its highest point, the GNP reached its lowest since it started increasing in 2007. The country however maintain a good control on its economy and since 2009 have an upside down GNP depending on the policy taken during the year by the government. 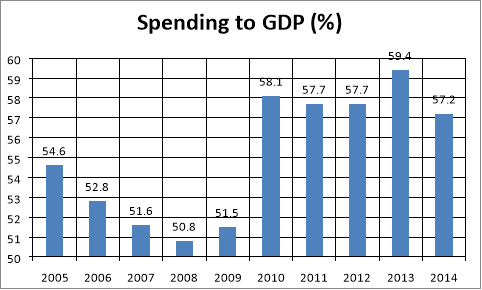 One of the reasons for government budget deficit to occur is because of the economic stimulation. In order to stimulate the economy, government reduces tax level and increases government spending. As the global recession occurred mainly in 2008 and 2009, there was depression during that period. Government boot the economy by lower the tax rate to encourage customer spending and increase demand, and on the other hand, increases government spending to create job opportunities and give support to the society. Thus, it is normal for having budget deficit for a certain period. 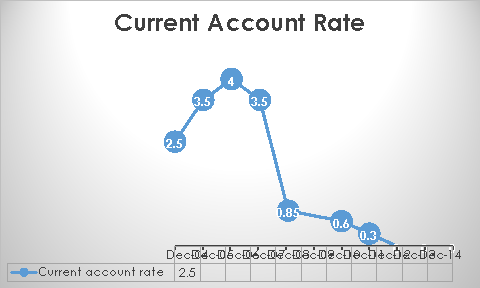 Current-account deposits at Danmarks Nationalbank are demand deposits which the monetary-policy counterparties can use as a means of payment immediately and at their own initiative (Official interest rates, 2015). Since 2012 the current account rate is stabilised on 0% and doesn’t seem to be moving. Before the crisis the current account rate was increasing, going from 2.5% to 4 % in 2006 which is its highest, then start to decrease a little on the year after, then a huge drop from 2007 to 2008. It went from 3.5% to 0.85, then kept decreasing till the point it is now. 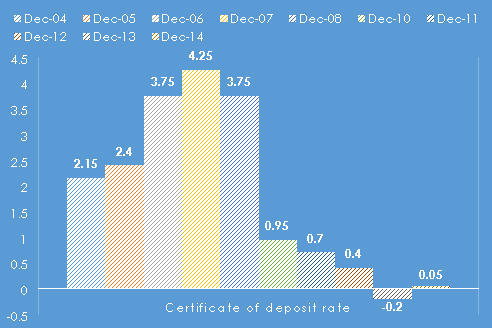 The negative rates are designed to discourage capital inflows and keep the currency from appreciating further (denmark/interest-rate, 2015). The country faced a huge decision with the crisis and adopted this in order to get back on track. Denmark deposit rate had its highest rate at 4.25% then with the crisis it dropped drastically to 0.95%. 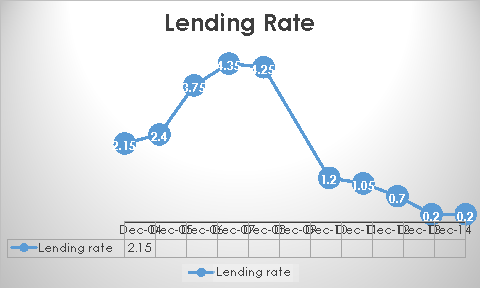 Reaching its highest figure in the past ten years at 4.35% the lending rate had gone through the crisis and suffered from it. In 2004 the lending rate was 2.14 then started to increase as the economy of the country was doing well. During the 2008-2009 with the crisis which touched most countries in Europe, it went from 4.25 to 1.2 which is a huge decrease. Since 2013 it is stable at 0.2%. 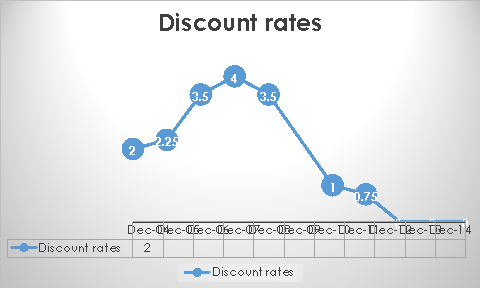 The Danish Central Bank implemented a negative deposit rate policy for the first time ever in June 2012 amid risks of a Euro area break-up. The Bank kept this rate below zero until April 2014 and then reintroduced the negative deposit rate again in September of last year. On 22 January, the Bank left the lending rate at 0.05% and the discount rate at 0.0% (denmark/interest-rate, 2015). Danish monetary authorities can always continue to sell domestic currency to weaken the krone, and the ECB is also dedicated to defend the peg. Although Denmark is perceived as a safe investment location, its reputation is nowhere near that of Switzerland so capital inflows are quite smaller. Effective from 6 February 2015, Danmarks Nationalbank’s interest rate on certificates of deposit is reduced by 0.25 percentage point to -0.75 per cent. The lending rate, discount rate and the current account rate are unchanged (Official interest rates, 2015).â€‹

In Denmark, the unemployment rate measures the number of people actively looking for a job as a percentage of the labour force. While unemployment in the 1960s and early 1970s was under 3 percent, it has been rising steadily since 1973 (time of the oil crisis), hitting an all-time high in 1993 at 11 percent for men and 14 percent for women. With the sound growth rates and an increasing emphasis on a more active labour market policy (training and job offers), in which attempts are made to improve the qualifications of the unemployed, unemployment has been falling since the mid-1990’ies to a low level compared with other European countries. 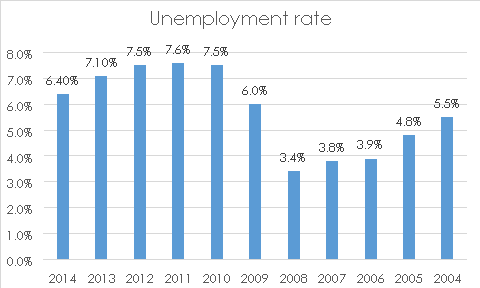 In 2010, the unemployment rate in Denmark was at approximately 7.5 percent. The country had an unemployment rate descending since 2004 and the boom, but with the economic crisis of 2008 the rate jumper to reach 6.0%. For the four years which follow it stayed above the 7% before starting to decrease in 2014 with a 6.40%. Lot of people lost their job during the recession in order for companies to get back on track. 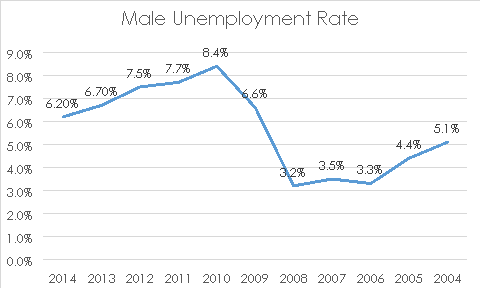 As the general unemployment rate chart the male unemployment chat followed the same path, as it went from 5.1% in 2004 to 3.2% in 2008, then in a year time it reached 6.6%. It continued and topped 8.4% in 2010 which is by far its higher for the past ten years. Due to the different plan from the government to get the country out of the crisis, the rate started to decrease as the economy started to get better. It is currently at 6.20%. 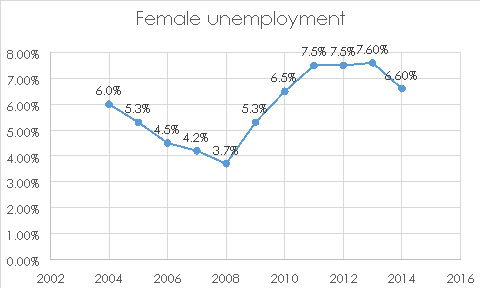 Contrary to the man unemployment rate chart the female were higher than the man with 6.6% in 2004 where the man was 5.1%. With the boom, the rate decreased to reach its lower point of 3.7% then kept increasing with the crisis for three years. It topped 7.60% in 2013 which is the highest point reached then went down the following year 6.60%. Since the economy crisis of 2008, the unemployment rate for female is lower than the unemployment for men. 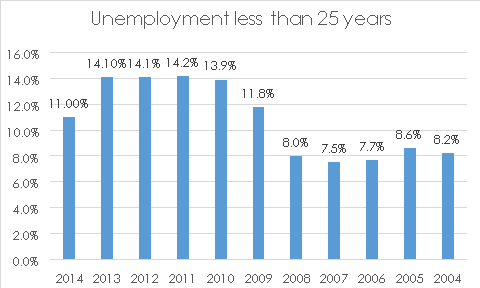 Increasing labour market participation is a high priority given the fiscal burden of an aging population. Building on previous measures to increase the retirement age, reforms to disability, sickness, and unemployment benefits as well as other active labour market policies and social assistance have been put in place. These share the common theme of restricting eligibility or the length of benefits and using the resources saved to provide greater support services for beneficiaries.

Consumer Price Index (CPI) measures changes in the price level of a market basket or consumer goods and services purchased by households. This is the important data which use to measure inflation rate of a country. 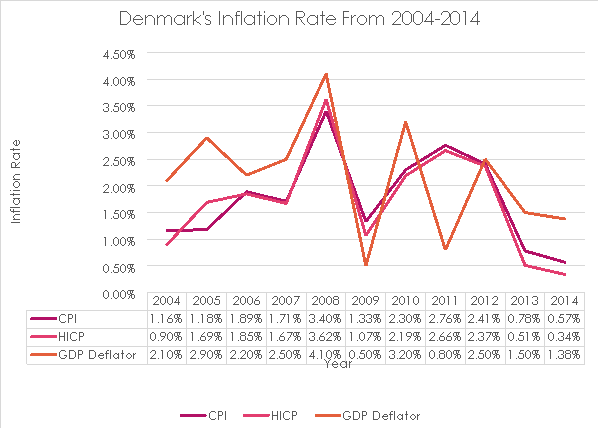 The rate of inflation often refers to the rate of inflation based on the consumer price index while GDP deflator reflects the prices of all goods and services produced domestically. It can be seen that the figures which measured by CPI and GDP deflator are different but the both of the trends are quite in a similar way. Besides that, HICP (Harmonised Index of Consumer Prices) is an indicator of inflation and price stability for the European Central Bank (ECB). It is a consumer price index which is compiled according to a methodology that has been harmonised across EU countries.

The economy is set to recuperate gradually as world trade regains momentum and confidence improves. On the fiscal side, the framework has been strengthened in recent years, public finances are in a relatively good shape and automatic stabilisers are large, which helps buffer adverse shocks. Past and recent structural reforms will help to raise labour market participation and to better control public expenditure. Danske bank stated: it is likely that private consumption will have the biggest impact on Denmark’s economic growth in the next few years. The current estimate is 1.6% for 2015 and 2.0% for 2016 (Denmarks-Economy-Predicted-to-Grow-in-2015, 2015).