Discuss the existing relationships between corruption and Foreign Direct Investment?

Foreign Direct Investment (FDI) plays a crucial role for economies as it is a vital factor of economic growth and development (Delgado et al, 2014). Multinational corporations through investments have enabled developing countries to have access to productive tools – advanced technologies and R&D, which are indispensable for growth, but otherwise devoid in the developing world (ibid). However, the presence of these tools does not guarantee growth-promotion effects as there could be an existence of certain factors such as corruption which can have a negative effect on the investment decision and lower the overall growth rate (Barassi and Zhou, 2012).

Corruption is considered an unofficial tax that cannot be avoided in most cases to get the work done (ibid). Corruption is not unusual in international business; it can become a regime for investors, especially in developing countries (ibid). FDI in particular is vulnerable to corrupt activities for reasons such as – income differentials are an incentive to corruption; bribes can be traded by investors for market power in the local economy and recover that cost through setting higher prices later; FDI is frequently linked with enormous infrastructure projects and privatization programs so that the size of the economic rents involved is substantial (Larrain and Tavares, 2004). 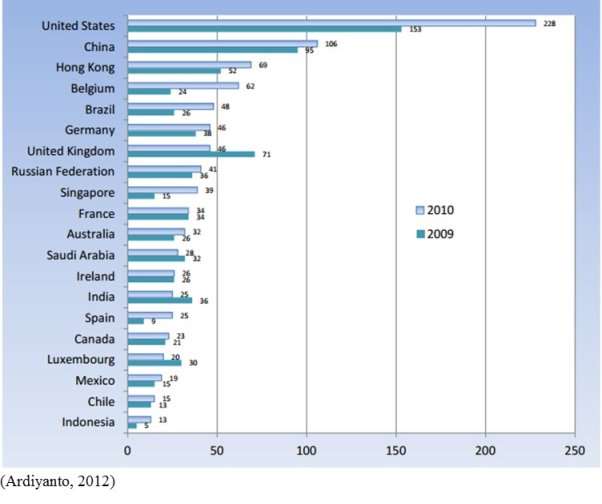 The next table depicts the Corruption Perceptions Index from Transparency International (TI) for the top twenty FDI destinations for 2010 and 2009 (ibid). TI ranks countries by their perceived levels of corruption, it ranks 182 countries on a scale from 10 (very clean) to 0 (highly corrupt) (ibid). 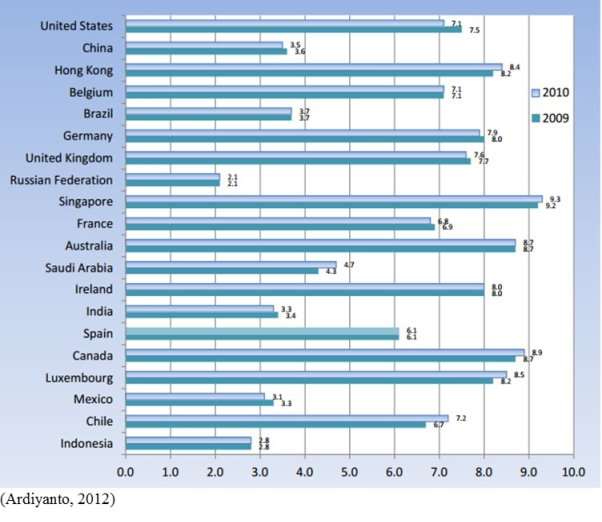 Corruption is perceived as harmful to investment – it is expected that the less corruption a country has; the more investments will be made, ceteris paribus (ibid). Based on the table above, this concept works when applied to U.S, Belgium, Chile, United Kingdom, Australia, Canada, Germany and some other Western European countries (ibid). But what about India, Brazil, China, Russian Federation, and some other developing countries? China was comparatively corrupt with average score of 3.5 in 2010 and 3.6 in 2009 but it was the second most popular destination of FDI (ibid). India was worse than China, but still it was better at luring FDI than Canada and Spain, which are less corrupt (ibid). The same goes for The Russian Federation and Brazil (ibid). In all, corruption can either work in favour of FDI or against it (ibid).

There are two views on how corruption can have an impact on FDI (Petrou and Thanos, 2014; Helmy, 2013; Zhao et al, 2003). The “grabbing hand” view, argues that corruption leads to an unnecessary build-up of costs and as a result, negatively affects investment flows into the host country (ibid). The opposing view is that corruption plays a role of a “helping hand” to implement a bribing mechanism which would expedite procedures, eventually helping FDI (ibid). There exists a U-shaped relationship between corruption and FDI (ibid). At low to moderate levels of corruption, the “grabbing hand” view succeeds, and on the flip side when there is a high level of corruption, the “helping hand” view prevails (ibid).

A stream of researchers’ state that FDI would increase by 15% if corruption would drop by 4.7 points (on a scale of 1 to 10) (ibid). However, work done by other researchers negate the above statement as they suggest that high levels of corruption facilitate FDI, since corruption “greases the wheels” by promoting transactions and investments which otherwise would not take place and thus overcome the obstacles that an inefficient bureaucracy tends to create (ibid).

Corruption can cause numerous problems while dealing with the government, for example, in gaining production permits and export licenses, less transparent and more costly, in particular foreign investors (Smarzyska and Wie, 2000). Having a local partner will lower the transaction cost – the cost of securing local permits (ibid). At the same time sharing ownership may lead to technology leakage (ibid). Costs of local permits and losses from technology leakage are positively related to the extent of corruption in a host country (ibid). Investment shall not take place when the corruption levels are considerably high. However, when corruption levels are low, enough so that investment can take place, the foreign investor with more avant-garde technology prefers a wholly-owned form, but holding the technology level constant, the investor is more inclined to have a local partner in a more corrupt host country (ibid).

Foreign investment has the potential to boost market competition, efficiently allocate resources, the espousal of better governance practices and the dissemination of pro-business norms (Pinto and Zhu, 2009). Therefore, FDI should be related with lower corruption levels in host countries (ibid). Yet, given its special nature, FDI could also be associated with negative economic and political consequences (ibid). It is a form of investment where production is organized hierarchically under the control of a MNC in order to protect intangible assets owned by the parent company (ibid). MNC’s tend to focus on sectors with higher barriers to entry and have the capability to crowd out domestic investment, and withhold market competition in the host (ibid). Generally MNC’s do have the know-how and technology to capitalize on resources locally available as compared to usage done by domestic firms (ibid). The potential benefits associated with FDI, including technology and know-how spill overs, are likely to depend on the absorption capacity in the host country (ibid). Hence, we argue, whether FDI increases or reduces corruption will depend on the economic and political environment in the host, which determine the opportunity for rent creation and the ability to appropriate and share those rents between investors and incumbents respectively (ibid).

Foreign direct investment can reduce corruption as the high levels of international capital mobility make foreign investors more likely to exit the market if corrupt practices are not kept in check (Larrain and Tavares, 2004). American and European investors are firmly against corruption in host countries (ibid). Foreign standards of probity have an impact on local officials and their behaviour, keeping in mind the utmost importance of foreign investors to local economies (ibid). The frequency of corruption will be low if it has long-term negative consequences to the firms and individuals involved, as in the case with FDI projects (ibid).

In essence, there exists a U-shaped relationship between Corruption and FDI. “Grabbing hand” view prevails in low to moderate levels of corruption and at high levels of corruption the “helping hand” view succeeds. Most of the studies done have indicated that corruption has a negative impact on FDI, but there have been a few studies that do not find such a negative influence. The impact of corruption on FDI would depend on the characteristic of the economic system of the host country. Corruption has a negative impact on FDI in developed economies because it increases the uncertainty and cost of operating in the country, but in transition economies, corruption enables the bypassing of sketchy regulations and institutions. However, large FDI inflows does decrease national corruption – a 1% increase in FDI as a share of output decreases corruption by 0.3 (scale of 1-10) (Larrain and Tavares, 2004). The relationship between corruption and FDI is complex – primarily depends on the level of corruption existing in that country. Corruption has the tendency of swaying in both ways, but it is beneficial to the foreign investor when it acts as a necessary evil.