Diverse cultures of US and China

Culture rules nigh on every particular phase of your life and like many, you are completely unacquainted of this. If inquired, you would define culture as architecture or language, music, visual arts, literature and you wouldn’t be wrong. Nevertheless you wouldn’t be completely right either.

The United States of America is one of the multi ethnical, multi racial and multi cultural countries in the world. It has a highly diverse culture which has helped in forming its unique values. This diversity in culture can also be distinguished geographically where certain groups in different geographical locations have formulated a unique culture among themselves which is quite contrastingly diverse from mainstream American culture. They are Asian-American, Afro-American and Hispanic cultures.

China can be listed as a country that has a very rich culture, certain aspects of which dates back to the ancient civilizations 5000 years back. This has been passed down from generation to generation thus preserving its identity and richness. It can be stated that it’s unique, diverse and yet harmoniously blended culture is a priceless asset to the world.

The business practices of China and US

The world of international business as we all know consists of people from different real and virtual work places in countries. Therefore it is important to know about a countries culture in order to adapt to it and be successful. Culture is complex and multi dimensional, to understand its basic nature we need to consider the Elements of culture.

“Language” the key to culture transmits information. The Americans have commonly around 15 languages. Their main languages are English, Spanish and Indo European. Chinese have over 90 languages with 8 main languages where Mandarin is commonly used. A low context culture’s communication is precise and direct. But in terms of High context culture a lot of terms and facts that go unsaid. Practically Americans tend to communicate directly while the Chinese communicate indirectly, which eventually turns out to be a frustrating situation for Americans as they are quite unsure of what the Chinese expect. This is so while the Chinese feel unsettled by their direct approach.

There are over 15000 “religions” in the world. China is a multi religious country which comprises mainly of three religions such as Confucianism, Taoism and Buddhism. They believe that this world is an illusion and that everything is temporary. Also, that all living things including human beings constantly go through a process of life and death. They also believe in reincarnation. Somehow on the other hand, America comprises mainly of Christian believers and the minorities of around 6% belong to other religions. There are also those who don’t practice in any religion.

Every country has their “values and attitudes” that distinguish them from others. There are different sets of attitudes towards time and future. In US time is important and is equivalent to money while China’s attitudes differ from that. They believe that time is required to make important decisions and look out for long term relationships with their business partners. This creates a contrast affecting their business transactions.

“Customs” too are related to international business. US is physically isolated from all countries except Canada and Mexico. This has contributed to the isolation and the lack of concern towards the rest of the world unless they are threatened by another country or state. China however is connected to many other Asian countries and tends to be interdependent and concerned other nations. Americans have their food eaten using the folk and spoon while the Chinese use chopsticks. Americans tend to shake hands, hug, kiss on the cheek, gesture with one’s hands and use the first names while speaking to adults. Chinese however tend to bow or nod and use fewer gestures as possible. These extreme diversities could be no challenge if each country respects each other’s culture.

It’s rather difficult. But International businesses are taking place among each and every country due to the wide spread technological and demographical advancement of the societies living on earth. So to understand better and improve the standard of living, people should firstly understand the framework of assessing various cultures.

These values are explained as Dimensions of culture by psychologist Dr Geert Hofstede. He further went on to explain that this cultural dimension consists of 5 principles.

Dr. Hofstede found many similarities and differences among these 5 dimensions. And he elaborated that, Building connections with people from around the world is just one dimension of cultural diversity. And therefore we should need to factor it into motivating people, structuring business related projects and developing strategy. USA and China we find similarities and differences with regard to these 5 dimensions. So for simplicity we could explain the dimensions, in a line graph between both China and the United States. 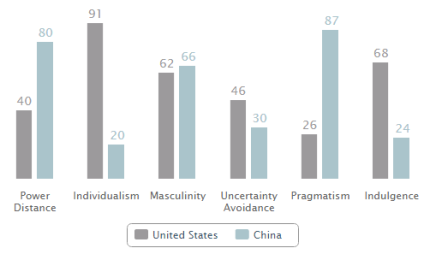 The buying behavior of consumers

Buyer behavior refers to the decision making process and acts of the buyer in purchasing a particular good or a service. The buyer behavior regarding a product may change with the type of culture existing in a country. However the steps in the consumer decision making process remains the same and thus can be used as a suitable instrument in analyzing the behavior of consumers in two countries that are culturally contrasting. 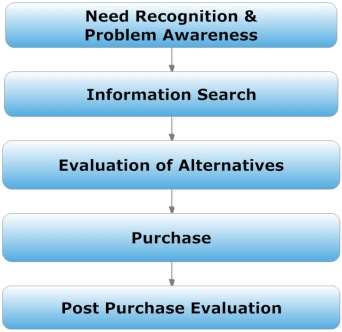 In China, the key cultural drivers of purchasing decision making are philosophies such as Confucianism and Taoism as well as the collectivist nature of society. China being collectivists in nature gives much consideration to the voice of the public as well as ‘face’ (Mianzi) and ‘relationship’ (Guanxi) issues.

In the USA, individualism plays an important role in all consumer decisions as well as religion, race and geographic location.

Future economic development of China and US

China was under the communist rule since the revolution in 1949. After the leadership in 1978 china moved away from the central planning and government oriented policies towards a more decentralized economy. China is now a market economy making it a strong role for development of the state. The United States were always a market economy and the economy represents very small roles played by the government. 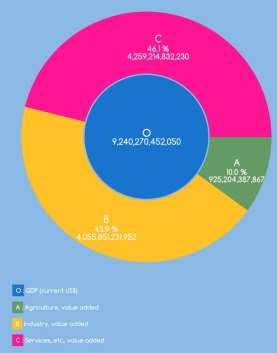 When focusing on the employment rates and wages of the Chinese labour force it is relatively cheaper in a global context. This could lead China to being one of the strongest economic forces of the future and it could also be a significant factor for many international businesses. In china it is believed that work-life is about integration and harmony within work forces. A balanced work life and family life is not a significant aspect in China. Chinese employees do not interact socially but are more domestic oriented. US employees on the other hand are more work oriented. But it also differs according to their social class. For Example the lower level employees work seven extra hours a week which is equivalent to an average day’s work. The Chinese employment relationship strongly influences the work place to be “family like” while US prefers to have a professional working environment. The concept “work hard play hard” applies directly to the US work force.

China has the largest population in the world being 1.357 billion as at 2013 where as the US population only counts to 316.1 million as at 2013. Firstly, internal migrants have supplied abundant labour to the Chinese economy. Secondly a large number of Chinese are 60 years or older and Finally, Chinese families have only one child based on their three decade old policy. These factors will in future represent a crisis since these effects are hard to reverse back. The US population mostly consists of senior citizens. That is, 13% of the population are more than 65 years old and is expected to increase to 20% by 2050. Also the population of young people is expected to rise in contrast to China. 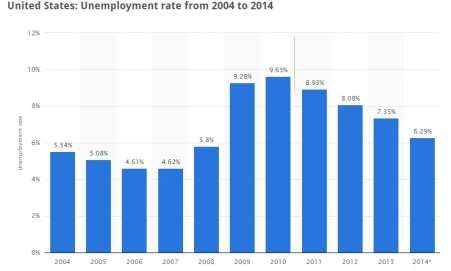 Since 2002 US is the largest economy in the world. China achieved a rapid growth in 2010 where it became the second largest economy, beating Japan. Since then US and China are the competitive nations of the world. The predictions of future economic rates as at 2019 are that the US GDP would be 22.1 trillion dollars compared to China with 14.8 trillion dollars. US is more service oriented where as China has a balance between Service and Industries

The Unemployment Rate in China as reported by the Ministry of Human Resources and Social Security of the people’s republic of china has remained unchanged being 4.10 percent in the third quarter of 2014.

Chinese still poses less prospective than Americans to Say They Live Comfortably:Superficially at odds with the country’s growth and sense of economic positivity, the Chinese have not grown more likely to feel they can live comfortably on their current income over the past six years. In 2012, 58% said they were able to get by on their current earnings, an amount that has remained relatively fixed. About a third (32%) is finding it verydifficult to earn just enough money to live on, and this rate has similarly continued basically constant. This would seem to suggest that economic progress has not yet directly translated into a more monetarily secure population, or, on the other hand, that as the Chinese sense wealthier, they find themselves attaining new requirements. And, one in 10 Chinese claim that they are living comfortably on their current revenue, a percentage that has shown no growth over time.

Americans continue to maintain a much better average than the Chinese regarding their individual revenues. A plurality (38%) in 2012 said they were living comfortably on their current revenue; additional 34% said they were getting along. A quarter of Americans have found it very difficult to live with their current income. Although they are greater than the Chinese on this metric, Americans’ opinions of their capability to live a comfortable life have been affected by the recession. They are a reduced amount to be expected now than in 2007 to feel they can live comfortably on their present-day income and more probably to feel it is challenging to live on it.