The reforms proposed during 2003 were in continuation with those discussed in the MacSharry reforms and subsequently in the big ‘AGENDA’ in 2000. The reason for naming this the phase 3 of CAP is that this policy moved into its third stage (level) of development towards reaching the ultimate goal of becoming a ‘COMPLETE’ world model for the years to come. We all know since its establishment in 1962 with appropriate land reforms (rights only to those who cultivate on that farmland) and the movement towards providing cheap and ‘quality’ food grains to its consumer and then the producer aid through subsidy, CAP has changed with time for the good. But, providing increasing focus to ‘world welfare’ at large during 2003 has given this model a holistic picture.

There are few important terminologies to be understood before we can analyse the 2003 reform and its impact on producers, consumers and the future of EU (European Union) spending on strengthening its agricultural sector. Firstly, the ‘Pillar One’ and ‘Pillar two’ reforms which are a conglomerate of the budgetary expenditure to be allocated by the EU for improvement of their primary sector.

Pillar one reforms represent the broad division of food products and the different kind of support in the form of ‘Aid’ and ‘Non-Aid’ schemes. This pillar comprises of all the basic and initial characteristic functions of CAP. Direct payments were given to farmers for selected food items. For instance, cereals and dairy products were given priority in terms of allocation of land, storage facilities, premiums, buying a fixed percentage by the government , subsidies etc.

Pillar two reforms were those different set of budgetary expenditure allocated by the EU (proposed in 2003) to achieve the target of ‘rural development’. But these were not compulsory for the member nations to adopt. Amongst the 22 measures proposed was divided into 3 sub-categories namely: improving the less agri favourable areas, enhance competition in the sector, and other broader development of those rural areas in terms of tourism and economic viability. Funding for both these pillars happen through the channel of European Agriculture Guarantee and Guidance Fund (EAGGF) of the EU.

Also, the new member nations included under CAP (apart from the earlier 15 nations) would benefit more from these pillar two reforms as they implement these funding objectives with immediate effect.

Cereals>Diary products>Beef>Olive Oil and seeds were the order in which priority was given to these products (individually in terms of benefits).

The graph below will help us to understand how the nations (erstwhile CAP members) moved into Pillar 2 actively as a result of 2003 reforms and spent their budget on its various sub-categories : 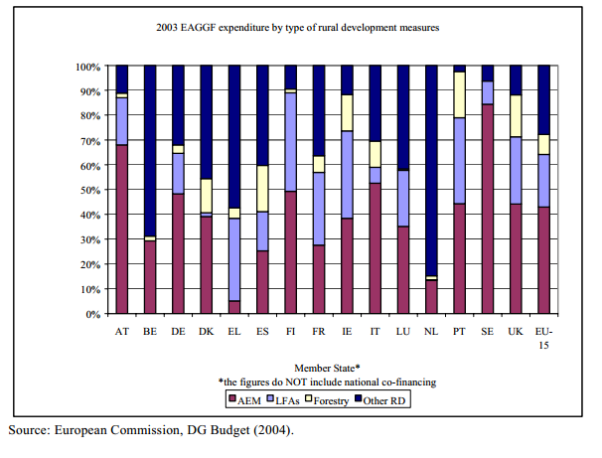 There is a drive towards an overall improvement of landscape across EU nations ( clearly visible from this graph) wherein ‘Less favoured areas (LFA’s) and Agro environment measures (AEM) gaining pre-dominance.

Though farm management at the individual level is not the concern of CAP per say, the bridging of gap between primary sector’s due and farmland restoration lies in the fundamental objectives of CSP when it was established in 1962. Improving vocational training for the farmers to cope with advanced technologies of mechanized farming along with and providing aid to help improve processing and marketing of agricultural products were the next zone of focus for CAP.

It is now very important to understand these three following terms to sum up what 2003 reforms is all about. They are inter-connected and have somewhat similar end goals, but different in its own right. These are namely: Decoupling, Modulation and Cross-compliance respectively. They do not come in order, but are separate processes to be understood clearly.

As we have seen in the evolution of CAP and its achievements, coupling was followed heavily during the changing phase of early 1980’s wherein market access (easy availability of cheap and good quality food products consumers) and producer support in the form of direct payment for specific crops and consumer’s popular choice products went hand in hand. But, this decouple helps to break this link that farmers are enjoying through EAAGF scheme of the EU. This will not harm them but help them and their future generation who would be willing to get into farming and related practices.

Though decoupling was implemented with effect from 1st January 2005 for various crops, this reform to the earlier agenda was proposed in 2003 itself. This shows the setbacks of implementing a procedure.

There is a special provision under the ‘National envelope scheme’ wherein the concerned governments can transfer 10% of the funding they get from pillar one in the form of direct payments towards rural development in lieu of enhancing the quality of environment and sustainable development.

The three bullet pointers of impetus under this transformation were:

The newer entrants into the CAP were able to receive the earlier pillar one payments across a period of 10 years upto 2013 to reach the level of the 15 member nations. This phasing out was used by them effectively (for instance through the national envelope scheme) to not only improve producer and consumers, but also make the environment better off.

A simple graph will help demonstrate this period easily: 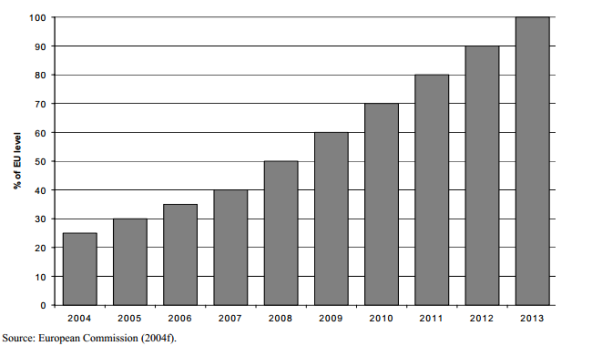 Simple arithmetic progression has been forecasted to allow new members to be inducted into the CAP league.

The long process of moving your funds from pillar one of direct specific payments towards pillar tow to achieve non- urban development (important for ecological balance) is termed as modulation. Up until 2003, this medium was a voluntary scheme proposed by EU, hence making it difficult to administer and track. This is one aspect wherein the 2000 ‘AGENDA’ and the 2003 reforms have a huge change. Modulating the budgetary funds of the EAAGF was made mandatory. This compulsion forced member nations to think above self-sufficiency and sustenance. The phasing out of this process was at the rate of 4%, 5%, 6% and 7% respectively for the year 2005-2008 respectively. The EU would be allowing each member country to keep 1% of the new fund and from the remaining excess, atmost 80% would be received by the country. This loss of 20% would be used by the EU for enhancing the welfare of primary sector at large.

Those nations who wish to voluntarily shift more than that specified in regulations of 2003 reforms towards Pillar two were welcome to do so.

One of the methods to stop the escape route of pillar two or other rural development policies can be churned out through this method. There are certain Statutory Management Requirements (SMR’s) to be followed by member nations as per regulations set out in the annexure of 2003 reforms. The target of this process is to attain Good Agricultural and Environment Condition (GAEC). If nations don’t comply; either due to reduction in the direct payment used or with voluntarily taking such a risk, then a reduction of (1 to 5%) or (15-100%) would be applied by the EU.

Since the earlier member nations had difficulty to move to pillar two (as told before), and funds primarily involved direct payments, cross compliance help in checking the efficiency of fund distribution.

All these proposed reforms were successfully implemented post 2005 only. More than anything else, the change in thought process towards ecological balance and environment up-gradation. Processes like area specific payment, or hectare specific payment, or premiums given to crops were all regulated uniformly for food products, with focus shifting from producers and consumers to the ecosystem at large.

The Common Agricultural Policy: A partnership between Europe and farmers, European Commission, Luxemburg: publication office of the EU, ISBN 978-92-79-22067-8.

Select Committee on the European Union, Government responses: Mid-term Review of the Common Agricultural Policy; and the future status of the EU charter of the fundamental rights, Session 2002-2003, 27th Report.