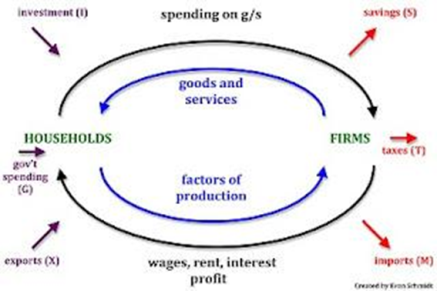 The Circular Flow of Income Model

There are two main flows within the model shown above, the flow of physics, things, e.g. Good and services, and the flow of money, which pays for the physical things. There is a specific pattern that the circular flow of income follows: Production – Income – Expenditure – Production. As seen in the diagram above, the spending on goods and services is equal to the income receive by households, therefore National income = National expenditure.

Though not all income produced will be spent on domestically produced goods. Some of the income is used to pay taxes or can be saved or spent on imported products and services. So saving, tax and imports are leakages in the circular flow model. Similarly, sometimes there can be extra spending in the economy, from government expenditure, investment and spending on exports, which is added to the circular flow model. These are called injections.

Aggregate means total and in this case the term is used to help measure how much is being spent by consumers, the government, firms and the people and businesses overseas.

The formula for calculating aggregate demand is as follows:

Consumers (C) – Can also be known as consumptions. This is what households spend on goods and services, with the exception of purchases of new housing.

Capital Investment (I) – This is the money spent on capital goods, e.g. equipment and new buildings to produce more for the consumers.

Government Spending (G) – the spending in goods and services including public goods and merit goods.

Exports (X) – The exports sold overseas are an inflow into the circular flow of income, and also spending adding to aggregate demand.

Imports (M) – imports are a leakage from the circular flow of income and spending.

Macroeconomics is the study of the economy as a whole and the variables that control the macro-economy. One of the key macroeconomic variables is growth. Economic growth is a rise in the capacity of an economy to produce good and services, related from one time to another. It is a measure of expansion of the economy over time. Economic growth is important as it helps achieve higher average incomes, this helps consumers enjoy more goods and services and helps them to enjoy a better standard of living.

How has economic growth changed in the past two years?

How has employment changed in the past two years?