An open economy is an economy in which there are economic activities between domestic community and outside, e.g. people, including businesses, can trade in goods and services with other people and businesses in the international community, and flow of funds as investment across the border. Trade can be in the form of managerial exchange, technology transfers, all kinds of goods and services. Although, there are certain exceptions that cannot be exchanged, like, railway services of a country cannot be traded with another to avail this service, a country has to produce its own. This contrasts with a closed economy in which international trade and finance cannot take place.

The act of selling goods or services to a foreign country is called exporting. The act of buying goods or services from a foreign country is called importing. Together exporting and importing are collectively called international trade. There are a number of advantages for citizens of a country with an open economy. One primary advantage is that the citizen consumers have a much larger variety of goods and services from which to choose. Additionally, consumers have an opportunity to invest their savings outside of the country. In an open economy, a country’s spending in any given year need not to equal its output of goods and services. A country can spend more money than it produces by borrowing from abroad, or it can spend less than it produces and lend the difference to foreigners. There is no closed economy in today’s world.

An economy in which no activity is conducted with outside economies. A closed economy is self-sufficient, meaning that no imports are brought in and no exports are sent out. The goal is to provide consumers with everything that they need from within the economy’s borders. A closed economy is the opposite of an open economy, in which a country will conduct trade with outside regions. 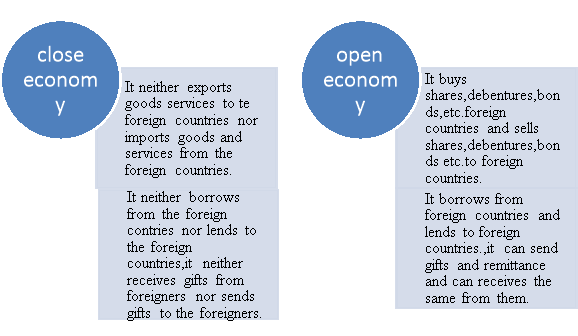 American countries in adopting open economy and free and other trade practices or the United States an open economy is the opposite of a managed economy. It is one that is characteristically market-oriented, with free market policies rather than government-imposed price controls. In an open economy industries tend to be privately owned rather than owned by the government. In the area of international trade an open economy is one whose policies promote free trade over protectionism .On the other hand, a managed or closed economy is characterized by protective tariffs, state-run or nationalized industries, extensive government regulations and price controls, and similar policies indicative of a government-controlled economy. In a managed economy the government typically intervenes to influence the production of goods and services. In an open economy, market forces are allowed to determine production levels. A completely open economy exists only in theory. For example, no country in the world allows unlimited free access to its markets. Most nations have fiscal and monetary policies that attempt to improve their economies. Many economies that are open in some respects may still have government owned, monopolistic industries. A country is considered to have an open economy, however, if its policies allow market forces to determine such matters as production and pricing.

In a closed economy, all output is sold domestically, and expenditure is divided into three components: consumption, investment, and government purchases.

1.4 INVESTMENT AMONG THE OPEN ECONOMY AND CLOSED ECONOMY

An open economy is one that engages in international exchange of goods, services, and investments. Exports are goods and services sold to buyers outside the country, while imports are those purchased from foreigners. The difference between exports and imports of goods and services is called net exports. When foreign trade is introduced, domestic demand can differ from national output. Domestic demand comprises consumption, investment, and government purchases (C + I + G). To obtain GDP, exports Ex) must be added and imports (Im) subtracted, GDP = C + I + G + X.

1.5 IMPORT AMONG THE OPEN ECONOMY AND CLOSED ECONOMY

The act of selling goods or services to a foreign country is called exporting. The act of buying goods or services from a foreign country is called importing. Together exporting and importing are collectively called international trade. There are a number of advantages for citizens of a country with an open economy. One primary advantage is that the citizen consumers have a much larger variety of goods and services from which to choose. Additionally, consumers have an opportunity to invest their savings outside of the country.

Utility, or usefulness, is the ability of something to satisfy needs or wants. Utility is an important concept in economics and game theory, because it represents satisfaction experienced by the consumer of a good. Not coincidentally, a good is something that satisfies human wants and provides utility, for example, to a consumer making a purchase. It was recognized that one cannot directly measure benefit, satisfaction or happiness from a good or service, so instead economists have devised ways of representing and measuring utility in terms of economic choices that can be counted. Economists have attempted to perfect highly abstract methods of comparing utilities by observing and calculating economic choices. In the simplest sense, economists consider utility to be revealed in people’s willingness to pay different amounts for an economic term referring to the total satisfaction received from consuming a good or service. A company that generates transmits and/or distributes electricity, water and/or gas from facilities that it owns and/or operates.

The distribution of wealth is a comparison of the wealth of various members or groups in a society. It differs from the distribution of income in that it looks at the distribution of ownership of the assets in a society; the word “wealth” is often confused with “income”. These two terms describe different but related things. Wealth consists of those items of economic value that an individual owns, while income is an inflow of items of economic value (See Stock and flow.) The relation between wealth, income, and expenses is rather than the current income of members of that society.

Factors of production may also refer specifically to the primary factors, which are stocks including land, labor the ability to work, and capital goods applied to production. Materials and energy are considered as secondary factors in classical economics because they are obtained from land, labor and capital. The primary factors facilitate production but neither become part of the product as with raw materials nor become significantly transformed by the production process as with fuel used to power machinery. Land includes not only the site of production but natural resources above or below the soil. The factor land may, however, for simplification purposes are merged with capital in some case due to land being of little importance in the service sector and manufacturing. Recent usage has distinguished human capital the stock of knowledge in the labor force from labor. Entrepreneurship is also sometimes considered a factor of production. Sometimes the overall state of technology is described as a factor of production. The number and definition of factors varies, depending on theoretical purpose, empirical emphasis, or school of economics.

In exchange relations two actors come to an agreement to trade with each other on mutually agreed-upon terms. Something is delivered, and something is expected in return, in a quid pro quo (“something for something”) relation. In product and labor markets, exchanges typically involve a flow of goods or services from seller to buyer, in return for a monetary payment. The monetary payments in turn create flows of labor and capital income. For example, when customers buy shoes from a mall shoe store, the incomes created include the payment of a wage to the shoe salesperson, rent to the owners of the mall, and profits to the owners of the business. Labor income is compensation received by workers in the form of wages, salaries, and fringe benefits. Capital income includes rents, profits, and interest. (Rent as economists use the term, refers not just to rent for housing, but to payments for the use of any asset).

2.4 INVESTMENT IN NEWPLANT AND EQUIPMENT AMONG WEALTH DISTRIBUTION

Wealth is an accumulated store of possessions and financial claims. It may be given a monetary value if prices can be determined for each of the possessions; this process can be difficult when the possessions are such that they are not likely to be offered for sale. Income is a net total of the flow of payments received in a given time period. Some countries collect statistics on wealth from legally required evaluations of the estates of deceased persons, which may or may not be indicative of what is possessed by the living. In many countries, annual tax statements that measure income provide more or less reliable information.

2.5 ENSURE SUFFICIENT DEMAND AND SUPPLY FOR PRODUCTS AMONG WEALTH DISTRIBUTION

Have been described as the most directly observable attributes of goods produced and exchanged in a market economy. The theory of supply and demand is an organizing principle for explaining how prices coordinate the amounts produced and consumed. In microeconomics, it applies to price and output determination for a market with perfect competition, which includes the condition of no buyers or sellers large enough to have price-setting power. 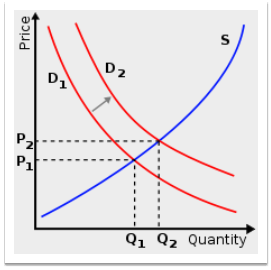 For a given market of a commodity, demand is the relation of the quantity that all buyers would be prepared to purchase at each unit price of the good. Demand is often represented by a table or a graph showing price and quantity demanded (as in the figure). Demand theory describes individual consumers as rationally choosing the most preferred quantity of each good, given income, prices, tastes, etc. A term for this is “constrained utility maximization” (with income and wealth as the constraints on demand). Here, utility refers to the hypothesized relation of each individual consumer for ranking different commodity bundles as more or less preferred.

This assignment task one based about open economy and closed economy. The task two about utility. The open economy is market economy mostly free trade barriers and where exports and imports form a large percentage of GDP.