The objective of this paper is to provide a better understanding of the Linear Cryptanalysis Attack developed by M.Matsui [2]. This paper has been written after going through noted literature in this field and has been structured in such a way that a beginner in this field would be able to understand the idea with little prior knowledge. The paper describes a simple cipher and then applies Linear Cryptanalysis to break it. The cipher has been intentionally taken to be very simple so that a beginner can actually implement it and get an actual feel of the attack. The paper also describes all the algorithms involved in this attack again with the intention of letting a beginner actually realize the attack.

If one feeds a random input with a particular property into a magic box and can guess the corresponding property in the output, the magic box is some what linear.

For example imagine that the box takes an input and adds one to it. Now, let’s say that the property which is looked at is whether the input/output is even. By feeding it an input, one knows the property will be opposite in the output every single time. In other words, adding one to an even number will always produce an odd number and vice versa. This magic box will be completely linear with respect to divisibility by 2.

In an iterative cipher, substitution box(s) (S-Box(s)) add non linearity to it. Ideally, an s-box should receive an input with property X and output a number that has property Y exactly 50% of the time.

The property, which is being looked at in Linear Cryptanalysis is Parity.

Parity: It is a Boolean value (a 0 or a 1), that we get if we perform an XOR operation on some or all of the bits of a number expressed in binary form. The bits that are being XORed together is defined by another number called the mask. The mask lets us to ignore some of the bits of the input while calculating the parity. In order to calculate the parity, the mask value it bitwise ANDed with the input value, the bits of the resultant is then taken and XORed together to obtain the parity.

The masked input parity concept is used to find linearity in the S-boxes. Every single combination of input mask vs. output mask has to be tested for all possible inputs. Basically we will take an input value, mask it using an input mask and obtain its parity (Input Parity). Next, we will take the original input, run it through the S-box and mask it with 6the output mask. We then compute its parity (Output Parity). If they match, then we know that the combination of input and output mask holds true for that input. After doing this for every possible input against every possible pair of input/output masks, we have made a table called the Linear Approximation Table. Each entry in the table is a number indicating the number of times a specific input/output mask pair holds true when tested against all possible inputs. For example, if a certain S-box takes 4 bit inputs and produce 4 bit output, then the LAT will be of dimension 16 x 16 and each entry will range from 0 to 16, indicating the number of successful matches between input and output parity.

Parity () is a function that computes the parity of the given input.

M is the total number of bits fed as input to the S-box.

N is the total number of bits produced as output by the S-box.

I ranges from 0 to 2m -1 , it represents all possible input masks.

J ranges from 0 to 2n-1 representing all possible output masks.

K ranges from 0 to 2m -1, it represents all possible inputs to S-box.

Let us assume an S-box that takes 4 bit inputs and produces 4 bit output. Both the input and output ranges from 0 to 15. Such a S-box is injective in nature.

For such an S-box, the algorithm to generate the Linear Approximation Table is modified as following:

Algorithm 2: Algorithm for generating Linear Approximation Table for the S-box given in Fig 1.

In this case, the LAT generated is of dimension 16 x 16.The following table depicts the Linear

Approximation Table generated for the S-box given in fig. 1 using algorithm 2.

Similarly, the LAT for any of the DES S-box can also be generated, For DES S-box; the algorithm is modified as the following:

In this case, the LAT is of dimension 16 x 64, the reason being DES S-box takes 4 bit input and produces 6 bit output.

One of the fundamental tools used for linear cryptanalysis is the Piling Up Principle. Let us conceder two random binary variables X1 and X2, and let us assume

Then, the probability of the relationship X1(+)X2 will be

We are particularly interested in deviation of the probability from ½, so, let us consider p1=1/2+ ε1 and p2=1/2+ε2, where ε1 and ε2 are the deviation of p1 and p2 from respectively from ½ and are referred to as probability bias. 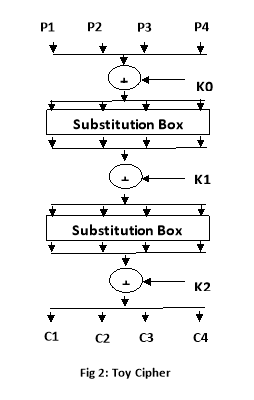 Let us consider a toy cipher that takes 4 bit input goes through two iterations of key addition and block substitution and yields a 4 bit output. The following figure diagrammatically represents the toy cipher.

Total key length is of 12 bits.

The cipher uses two identical S-boxes, which is same as the S-box described earlier.

The toy cipher yields the following output when Key[]ï¦{B,7,F}

Let Uij demote the jth input of ith S-Box and Vij denote the jth output of the ith S-Box.

Now, as we have obtained a linear expression with a relatively high probability bias, we would now partially decrypt the cipher text to obtain U2 (input to the 2nd S-Box). The following algorithm does this.

The algorithm yields the following probabilities.

From the result we observe that probability when key=F is 12/16 which matches with our expected probability, there by indicating that K2=F.

It should be noted that in our example, it so happened that there is only one candidate for K2, but generally there may be more than one candidate and all of then should be given due consideration.

For the next round, we use the partially decrypted cipher text with respect to key =F as the cipher text and perform the procedure defined as algorithm 5.

The output yielded at this point is given below.

The expected probability match4es with the observed probability for sub key K1= 7. Therefore with high degree of certainty, K1=7.

Now, in order to obtain the sub key K0, we need simply to choose any pair of plain text and partially decrypted cipher text and perform a bitwise XOR operation.

Thus, the actual key ={B, 7, F}, which is the key we originally used in our example toy cipher.

It should be noted that, at every step of our attack, we obtain unique sub key values that matches our expected probability, which may not be the case all the time. And in such situations where multiple sub keys matches the expected probability we need to consider each of these sub keys. 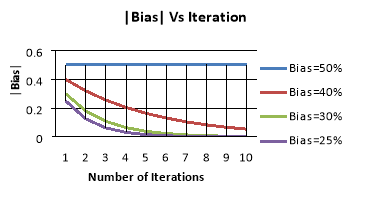 As the number of iterations of an iterative cipher increases and observations 1 and 2 does not hold, Linear Cryptanalysis becomes increasingly less effective.