There are several different functions which several, but not totally all, open source software products have in common:

So in this way software undergoes different stages for the development of the software. These stages are depicted as follows: 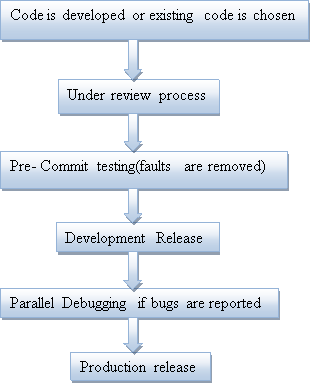 Open source software has a numerous advantages for the individuals, developers and companies. A few of these benefits could be realized only if agencies lead back once again to the community.

Software metrics play a crucial role in the administration of the software projects. Metrics used to track development process, quantify restructuring impact and to calculate code quality. Software metrics are very important to software engineering for measuring software complexity and quality, functionality, Characteristic of the software product. Software metrics can be used for Finding defects in the code, predicting defective code, predicting project success, and predicting project risk. Metrics help to recognize, to monitor and connect project problems at all stages. Metrics can precisely describe the position of software project application and product. Metrics can be utilized as a method to measure problems and to prevent being forced into a reactive fix. Metrics provide powerful medium for choosing the most effective alternatives.

Line of code metric is used to measure the size of the program code. It is the measure of all the lines of code available in the source code file except the comment lines. Loc metric is helpful in measuring the complexity of the code and it is also helpful to predict the productivity of the code. Following are the effects of LOC:

Thomas McCabe developed Cyclomatic complexity metric which is used to measure the complexity of the source code. It helps in determining the minimum possible paths which can build all possible paths by the use of control flow graph.

The value of cyclomatic complexity can be depicted by the use of the following formula:

Following are the effects based upon McCabe’s cyclomatic complexity metric:

Number of Children (NOC) is explained by C&K how many immediate subclasses of a class exists [4]. C&K’s see was that –

This is the measure of Response group of a class. It is defined as the number of methods in set of all the methods that are invoked in reply to a message sent to an object of a class [6]. C&K’s see was that –

Weighted methods for Class (WMC) was actually proposed by C&K whilst the sum of all complexities of the methods in the class. Each method in a class is assigned a complexity of one rendering WMC equal to the number of strategies in the class. Many traditional implementations follow this rule. C&Ks see of WMC was –

This is the average of the maximum block depth of each of the methods defined in the target elements. This metric is helpful in determining the complexity of the code. More the levels of nested block it will be difficult to understand the code. A method may have different conditional statements which create the flow of the code and nested blocks are generated. So it is concluded that

The code of open source software is accessible to everyone. So large number of users can enrol and make their contribution in order to make some modification if there exist some bugs. As the open source software are cheap so users prefer these software more than proprietary software. due to open source nature the bugs can be fixed whenever found. And even if the users are good developers then they can edit the code or use the code in order to give some more innovative software. in short these are the different ways to maintain the quality of software . due to high maintenance , good quality is achieved and in the end customers are highly satisfied. 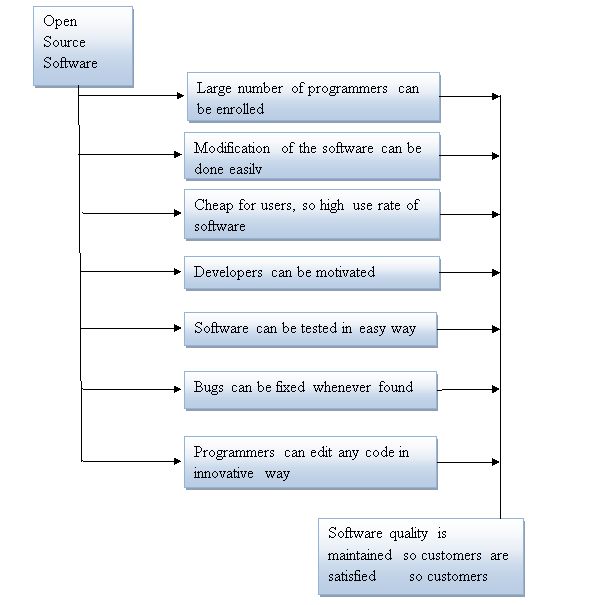 This dissertation represents the evaluation of the open source software by use of the varios metrics acting as the parameters on the basis of which quality of the software s evaluated. This chapter describes about the various metrics which are considered for evaluation and the effect of those metric on evaluation. After study about the metrics and quality of software, the motivation of the present work in the first chapter is represented, the dissertation is segregated into chapters to methodically express the work and the conclusion drawn. The work is organized into the following chapters and the content included in each chapter is briefly outlined as follows: