Abstract—The increasing number of mobile operating systems that operates the small hand held devices called the Smartphone, has become integral part of our lives. The openness of these new environments has lead to new domain of apps and markets and has enabled greater integration with existing online services like e-banking etc. Smartphone makers are competing in turns to trump each other for storage, processor speed, platform compatibility and camera megapixels but it’s the largely software – the mobile OS – that makes the biggest difference to the popularity and market share of Smartphone. This paper evaluates the popular Smartphone Operating Systems with the purpose of understanding the user friendliness, popularity, user privacy and security and accessibility with the wide range of apps. Our research focused on the advantages and limitations of the Smartphone operating systems with the intension to find out if one of them has an edge on the other and finally we propose the enhancements so as to make them more user friendly and secure.

Smartphone have become indispensible part of our life and everyone who uses it is getting addicted. Smartphone provides a wide variety of apps ranging from social networking to GPS based location searching that are useful for everyone in their day today tasks. In a study of 1,600 people including managers and professionals [1], Leslie Perlow, found that:

With these many professionals becoming dependent on Smartphone, which has necessary components of the computing platform: an operating system, applications and hardware. The main component of a Smartphone on which its functionality depends is the operating system ASmartphone,tablet or any other digitalmobile device is operated by the Operating system called the mobile OS. Modern mobile operating systems includes all the features of apersonal computeroperating system and in addition to that includes the features like atouch screen,cellular,Bluetooth,Wi-Fi,speech recognition,voice recorder, GPS mobile navigation,camera,video camera,music player etc.

The Smartphone operating system (OS) development has grown to include competitors such as Google, Microsoft, Apple, Symbian, and Palm with each of them trying to make it more user friendly and secure. Although these operating system platforms are trying their best and have come achieved a lot since their inception, none of these Smartphone companies provide a mobile OS that is ideal and satisfies all the users in terms of user friendliness and privacy. They claim that their platforms perform the best in all situations and will certainly not advertise any weakness with their Operating systems. This makes it difficult for end users particularly to a novice user to know which platform is best suited for their need.

Andy Rubin, Google’s director of mobile platforms, commented “There should be nothing that users can access on their desktop that they can’t access on their cell phone.” [1]. with this vision the popularity of smart phones having Google’s Android Operating System is continuously on the rise in the 21st century. 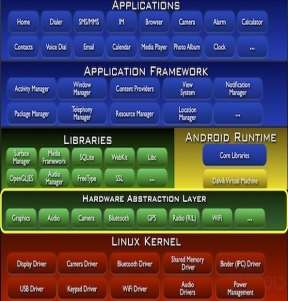 Some of the advantages of Android over other Smartphone operating systems is listed as under.

iOS is the mobile operating system developed by Apple Inc. It is the second most commonly used operating system behind Google’s Android. Unlike Android it can be installed only on Apple’s hardware.

The iPhone OS has seen a rapid rise in popularity and garnered a large and dedicated user base. The iPhone OS has risen so far and so fast primarily due to the innovations on user interface and availability of 3rd party applications [11].

Unlike the Android security architecture, iOS security model provides different philosophy for achieving mobile device security and user’s protection. The iOS application platform empowers developers to create new applications and to contribute to the application store. However, each application submitted by a third party developer is sent to the revision process. During the revision process the application code is analyzed by professional developers who make sure that the application is safe before it is released the application store. However, such an application, when installed, gets all the permissions on a mobile device. Application might access local camera, 3G/4G, Wi-Fi or GPS module without user’s knowledge. While Android lets each user handle its own security on their own responsibility, the iOS platform makes developers to write safe code using iOS secure APIs and prevents malicious applications from getting into the app store. The iOS security APIs are located in the Core Services layer of the operating system and are based on services in the Core OS (kernel) layer of the operating system [14]. Application that needs to execute a network task, may use secure networking functions through the API called CFNetwork , located in the Core Services layer. The iOS security implementation includes a daemon called the Security Server that implements several security protocols. The Security Server has no API with public access. Instead, applications use the Keychain Services API, the Certificate, Key, and Trust services API, which in turn gets access with the Security Server.

The Symbian OS was designed specifically for mobile devices with its small memory footprint and consumes low power. It is an open OS, enabling third party developers to write and install applications independently from the device manufacturers. An extensive C++ API is provided which allows access to services such as telephony and messaging, in addition to basic OS functionality. The Symbian OS was designed so applications could run for years without losing the user data. Also the OS has the capability of being platform independent and can run on more than one hardware platform [6, 7, 8, 9].

This platform is based on Windows CE (WinCE). WinCe is a compact OS specifically designed for pervasive devices. It is focused on providing a consistent interface for applications on various hardware platforms which emphasizes portability by providing the user with the Win32 API. The hardware platforms include Packet PCs, Smartphone, Portable Media Centers, and even onboard computers in automobiles. The Windows Mobile platform was designed for flexibility and with the developer in mind. For that reason it was designed to support lots of preemptive multitasking. It supports a whopping 256 priority levels for threads and up to 32 processes. It supports all of the standard mutual exclusion and synchronization methods you would expect from a desktop PC. This functionality makes it ideal for a Smartphone because the users typically demand multitasking and want to be as productive as possible [4, 7, 8, 9 ].

Palm OS is a proprietary operating system originally developed by Palm Inc. In the early versions (preâ€Garnet), the Palm OS was primarily utilized in Palmâ€developed Personal Digital Assistant (PDA) mobile hardware units. At one point, Palm PDAs with the Palm OS held 85% of the market share in the mobile device market [12]. However, in recent years, Palm’s market share has been in decline, mostly due to the stagnant nature of the OS development and has yielded the leading position to Symbian [6, 7, 8, 12].

As discussed in the previous sections, the mobile operating systems are competing for the major market share and are claiming to be the best for the users, yet they have number of limitations in their platforms which for obvious reasons they are not disclosing to their users. The malicious apps aimed at mobile devices have risen from about 14,000 to 40,000 in less than a year. This rise in the malicious apps requires the strong OS. The limitations of the Mobile operating systems are listed as under:

In order to enhance the security of the mobile operating systems we propose the following Enhancements:

The first step in our proposed security API is implemented by adapting an encryption technique utilizing Advanced Encryption Algorithm (AES) and applying it to all the personal files in the Smartphone. File operations offered by the proposed Security API should aid in the detection of potentially malicious Apps whose behavior matches that of Malware. Malware recognition is usually achieved by signature matching, heuristic analysis, or comparing hash-values 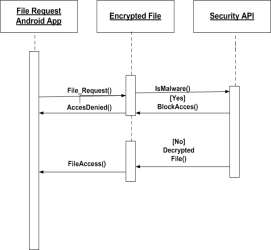 Fig 4: Sequence Diagram of the System

The increasing trend of Smartphone usage by individuals of all ages has brought forward stiff competition between different Smartphone OS’s and Google’s Android OS. However, recent researches and reports revealed that the novice users are not secure on these platforms because of the limitations of these OS. We found different types of limitations in various mobile Os and particularly in Android and iOS which are the leading mobile Operating Systems. We found that there is a major need of modification in the permission based model of security system and we strongly recommended the implementation of Need based security system in the mobile operating systems so that the novice user can be informed at run time about the access to its various resources.