Now days the use of mobile phone is increasing rapidly According to the version of mobile different sensors are inbuilt. The Smartphone has many inbuilt sensors like GPS, Proximity, Accelerometer, Gyro scope, Magnetic etc. using this sensors we develop many applications for different purpose.

In Smartphone sensors continuously broadcasted data. We will be developing various applications using that data for security as well as for saving the battery of mobile. Sherlock is a unified framework covering the major cases of phone usage, placement, attitude, and interaction in practical uses with complicated user habits. We prototype

Sherlock on Android OS and systematically evaluate its performance with data collected. Sherlock achieves low energy cost, rapid system deployment, and competitive sensing accuracy. Sherlock runs as a daemon process. Most context-sensible applications are human-centric, recognizing contexts from users point of view e.g., indoor/outdoor[9] , at home/in office, driving/walking[2] .Such information provide services according to user situation. For example, if a mobile phone is in a bag or pocket, it is useless to light up the screen when a phone call is coming. In addition, if a phone is placed on a sofa rather than on a desk, it is better to turn-up ring volume to avoid missing calls. Given accurate micro-environment Information, a phone can adapt its behaviour automatically and properly. when a mobile phone detects if its user is holding it in hand for safety .[2] When a user enters a building, it is unnecessary to keep his phone’sGPS[10] working to save energy.

Smartphone has open operating systems, such as Windows Mobile, Symbian, and Linux and scalable hard ware-software multi-function. Mobile phones and other wireless devices are becoming increasingly popular and that world expanded tremendously. [5]With the development of information technology, Smartphone have become the mainstream in the mobile market and have gradually occupied the market steadily. For getting new features traditional phones are replaced by Smart phones. Smartphone has several advantages over the traditional mobile phones: Keep full functionality of the traditional mobile phones (e.g. phone conversation, text message and so on). With the ability of plugging into the Internet . It is a kind of cell phone which includes personal information manager, schedule control, multimedia application and internet connection.[13]

Reuse and replacement of components 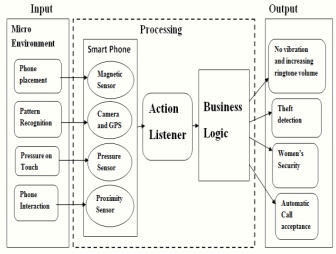 Microenvironment also known as a micro habitat, a very small, specific area in a habitat, distinguished from its immediate surroundings by factors such as the amount of incident light, the degree of moisture, and the range of temperatures. In our system there are different micro – environments such as phone placement, pattern recognition, pressure on touch screen, [5] phone interaction etc. are sensing by sensors.

Smart phone which contains many built in sensors

these sensors are Magnetic sensor, Camera and GPS, Pressure sensor, Proximity sensor etc. [2] These sensors sense the provided input environment and sends sensing data to Action listener which triggers actions. These actions are processing in Business Logic. Applications extract data from business logic and generate output according to applications[5].

From the input and processing blocks various applications will be generated such as No vibration and increasing ringtone volume, [7] Theft detection, women’s security and Automatic call acceptance.

Hardware layer is lower layer. It consists of all sensors which are used in Smartphone. There are different types of sensors like Accelerometer, Camera, [1][2] Proximity, Gyroscope etc.The sensor continuously broadcast the data and captures the mobile environment and gives captured data as input to upper layer i.e. middleware layer. According to the data received from the hardware layer it detects the behavior of the user and performs action accordingly.[7][15]

There are two types of detection.

[4]The main function of this proximity sensor is to detect how close your Smartphone’s screen is to your bod y. [9] When you use your Smartphone, it detects the position of ear with respect to screen and turn s off the light of screen and saves battery. Also proximity sensor stops the accidental touch, unwanted input during talk. [5] These sensors also detect the signal strength, interference sources and amplify or filter by use of Beam Forming Technique. 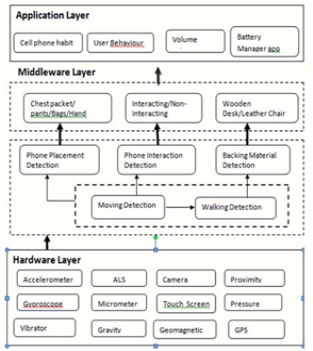 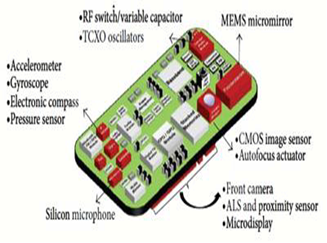 Since the beginning of race in mobile communication, a new model is being launched every day into the world with different features. These new features and specifications gain enough fame of users to survive in the competition of mobile technology. [10]Today different manufacturers like Samsung, Apple, Sony, HTC and many more manufactures of smart phones and became competitors. [13][11]One of the features that attract the mobile phone buyer is the smart work it does. Different types of sensors like accelerometer, ambient light sensor, GPS sensor, compass, proximity[11].

GPS short form of Global Positioning System, originally developed and setup for military operations and was made available for everyone in 1980s by government[8].

This sensor optimizes the light of screen when it exposed to normal light with different intensity. [3] Ultimate function of ambient light sensor is to adjust the display brightness, which at the end saves the battery power and life too.

The main function of accelerometer rise to sense the changes in the orientation of[13][11] Smartphone with respect to datum and adjust the orientation to suits the viewing angle of operator. For example, when you are looking for web-page with increased width, you can get this landscape view from changing the orientation of phone to horizontal.[11][8] These features are then utilized to determine whether the phone is in motion. There are plenty of moving detection schemes that can successfully vibration patterns: 1) the phone’s mechanical motion and 2) the acoustical features, which can be captured by embedded accelerometer and microphone, respectively.

To this end, Sherlock extracts a series of lightweight features from acceleration/acoustic traces in both time and frequency domain, and classifies backing materials like leather chair, wood desk or glass table.

This function is to maintain and control the sensor’s This position, level or orientation based on the principle of angular momentum.[6] When ‘Gyros’ used along with senses motion from six axes i.e. right, left, accelerometer up, down, forward and backward.

In this paper we present the design, implementation and evaluation of Sherlock simple yet practical platform for micro-environment sensing for Smartphone via collaboration among built-in sensors.[11] The platform automatically collects sensor hints and characterizes the immediate surroundings of Smartphone at centimeter level accuracy, providing fine-grained environment in formation to upper layer application.