Abstract: The paper highlights the cooperative behaviour of Multi agent systems by combining various renewal energy sources and then feeding the power to the grid. The process uses 6LoWPAN protocol to communicate with each other and C-ARTAGO’s interface control with Guarde properties to intelligently manage the demand and supply.

Denmark tops the list with a very high penetration of renewal energy producing nearly 20% of total electricity demand. There is a paradigm shift from traditional method of generating power to renewal energy systems. There are two broad areas of research in renewal energy: Energy Transition, Energy Storage.

Energy transition deals with conversion of natural energy into some form (Generally Electrical, Energy storage refers to store the energy generated by Natural resource generally solar cells uphill now manufacturers are using Conventional method of installing these energy sources, with the development of Internet of things the objects are made SMART. They can adjust output according to environment making them adaptive[2,3]. Unlike conventional internet, IOT supportive device usage with a very low bandwidth moreover the transmission is also inter sensor the novelty in this research area is to derive maximum efficiency from the entire setup. Each of the device will have an embedded chip sensor grid and communication link of all the connectivity nodes which are finally converted to cloud (P-cloud) for processing. For instance let up take the case of wind turbine, is case of any dynamic change in the operation of one turbine it is to be communicated to the cloud and all the turbines in line with turbine automatically adjust themselves, a self healing Immunization is injected which tunes the particular turbine in line with the other turbines. To manage the coherency between generation and storage battery signals and other parameters are sent to cloud for processing accordingly an adjustment/find turn of signal is generated to maintain the rhythm. Nowadays a new operating system like Windows and Linux has been developed specially catering to the needs of Internet of Things (IOT) named Contiki.

Similarly we can apply for solar cell where a cell submits its health report on P-cloud on regular intervals. Some of the embedded systems supporting IOT are XBee, Rasberey pie and Cognitive Radio[8,9] Supporting Extended Environmental Markup Language, a type of XML document used in PACHUBED (suitable for public upload, download and display of data for Internet connected Networks.

The paper highlights the development of a Toolkit for efficient management of Wind Energy and Solar Energy and feeding into the grid. In order to achieve synchronization between Wind grid, Solar Grid and existing grid we use the concept of Multi-agent system. These intelligent agents are integrated to a form self organizing net using swarming technique. Each of the wind mill and solar grid is connected by 6 LOWPAN Sensor devices. 6 LOWPAN is made up of Low-power wireless are networks. Which are IPV6 stub network. An Ad LOWPAN is not connected to the internet that operates without infrastructure.

In our framework we will be using Extended LOWPAN consisting of multiple edge routers. LOWPAN works on the principle of neighbor discovery (ND) LOWPAN needs participate in more than one LOWPAN at the same time also known as multi-homing. The protocol stack of 6 LOWPAN Protocol stack consists of Application, Transport, Network, Data Link and Physical. The Architecture of 6 LOWPAN consists of 1 Pv6 Internet connected to Remote sensor and an Edge Router which is connected with P2P link. This Edge Router consists of various Nodes of 6 LOWPAN (Figure 2) 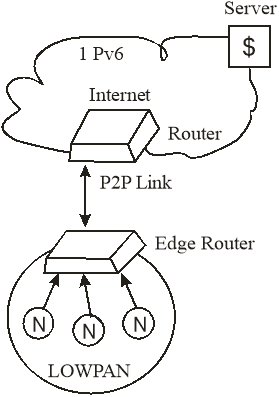 Neighbor Discovery in LOWPAN includes a built in feature for dealing with Micro mobility. All the messages generated are being monitored and tracked by the Central Control Unit which feeds the power to the grid.

Consider a scenario where grid of Wind Mills is installed, a grid of solar cells (figure 3). 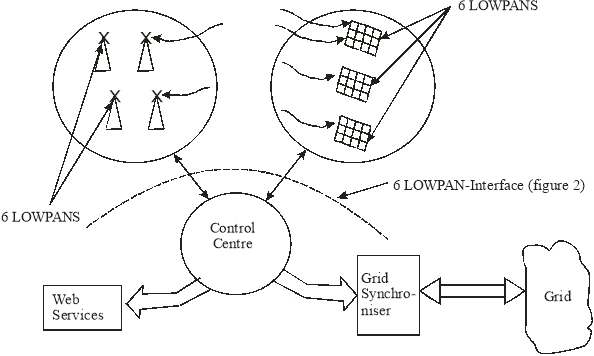 The above figure highlights the 6 LOWPAN sensor networks which is connected to each Wind Mill and Solar Panels. It is connected to the Control Centre by the help of an interface using 1Pv6 server and P2P connection by the Edge Router. The real time protocol for streaming the signals uses UDP which is an widely used for sensor data streams. The use Web services by the Control Centre helps in linking the current weather conditions (Sunny) or (windy) to Grid synchronizer which informs the Grid about the necessary invariability and power delivery in the Grid.

In order to simulate the entire set-up we use the concept of C-ArtAgo developed by Alassendro Ricei et al. [1]. It is a platform for providing a general-purpose programming model. It works on two different aspects Agents and Artifacts. It is modeled in terms of set of artifacts programmed by MAS. Secondly the artifact collaborate each other using the combination of 6 LOWPAN communication[3,5,7] defined in FIPA standard protocols. The FIPA protocol[10,11] uses some of the concept of high-level interaction. It is categorised into three sections: (1) Basic Protocols (2) Network Protocol Contractual FIPA (3) Protocols FIPA Auctions. Since the Network protocol and Protocols FIPA Auctions are used when a electronic commerce has to be established. We will be using Basic Protocols of FIPA. The FIPA Basic Protocol allows an agent to request to another agent to perform certain action. It is combined with 6 LOWPAN Protocol to generate a standard set of communication link given in figure 4. 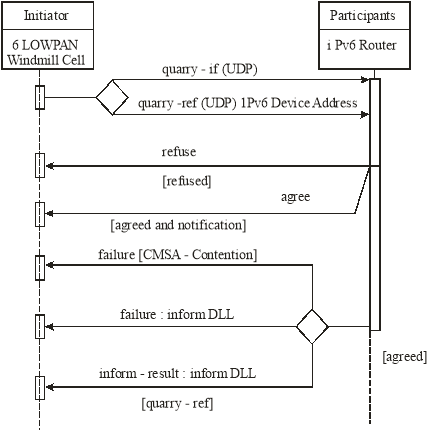 This protocol allows an agent to request to another agent to perform certain action. The agent on receiving the request indicates whether it accepts or rejects the request.

The FIPA protocol is further supported by conditional quarry protocol FIPA which allows an agent to request agent to perform an action when a certain condition is satisfied. The request protocol allows an agent to make an inquiry. The Agent on accepting the request can than acceptor refuse to provide information. (C-ArtAgo has a layerical structure with MAS acting as an middle layer. (figure 5) 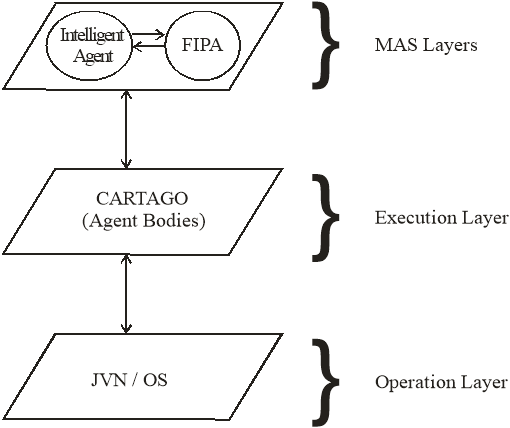 Consider a scenario where we have to integrate Solar grid, Wind Grid and Normal Supply side grid by using guidance from the Web Service agent. The Web service agent we have used here are: The Weather services and Load Demand services provided by distribution agencies. In order to collaborate all the above entities we treat them as intelligent agents. In order to collaborate all the above agents we use (C-ARTAGO’s usage interface control with Guarde properties. The operation control is either “enabled” or “disabled”. The Agent side side “Use” is used to trigger the Action, if “USE + ENABLED” then Action is Triggered otherwise the Action is stopped / Suspended.

The sample program using Guard is described as:

The above code deals with the problem of concurrent systems which requires effective coordination between produces agent (Solar Agent & Windmill Agent) and SupplyAgent (The Supply grid). The use of Guard operation in Boolean option provides a necessary control giving the exact amount of Windmills / Solar panels currently active and based on Web service agent communication and the grid requirement the Boolean values change accordingly.

4.0 Conclusion: The paper introduces a framework for specifying the interaction between various types of intelligent agents. The coordination between the solar agent and Wind Mill agent is achieved by 6LOWPAN devices connected on IPv6 environment. The communication is achieved by Web Senor connected with Web services which guides about the environmental conditions and Peak Demand variations which is going to come in next couple of days. System uses FIPA protocol architecture for multi agent coordination.

[10] Shoham, Y., and Tennenholtz, M., “On the synthesis of useful social laws for artificial agent societies”, in Proceedings of the 10th National Conference on Artificial Intelligence, pp. 276-281, 1992.