Abstract: Evolution of digital devices and computers makes an increasing attraction in document image analysis. Many of the paper documents have been transferred and stored using digital devices in large manner. In this work we have done image enhancement techniques to reduce the noises from degraded document images. Here we have taken sample images from Document Image Binarization Contest (DIBCO) dataset images. We have done contrast stretching, histogram equalization, noise filtering, laplacian transformation, global and local thresholding methods to remove show-through noise, un even illumination noise, shot noise from degraded document images using OpenCV open source software and performance metrics had taken for the above methods.

The study of image processing is an interesting topic and has various applications in different fields. One of the applications is document image analysis. Now the world is very fastly changed to digitization. Here the information is also digitized. Documents are a universal communicating way in our day to day life. Image processing techniques are very largely useful part in document image analysis (DIA) to transmit, process, store, analyse, enhancing and recognizing the document images [1]. At different stages, these image processing methods are used to de-noise the document images from noise affected images. Degraded images are affected by uneven illumination noise, show-through noise, salt and pepper noise etc. To reduce this noise contrast stretching, histogram equalization, noise filtering, laplacian transformation, thresholding methods of image processing techniques are discussed here.

Document Image Enhancement is the process which is essential to have a uniform background and a good quality of printed/handwritten document images. This process aims to enhance the readable format of text in document and it allows reducing the noise. The major artifacts takes part in degraded document images are low contrast and uneven background illumination, show-through and shadow-through effects, damaged characters and noisy black borders [2]. To rectify this type of noises from documents; some image processing techniques are done using OpenCV software.

Contrast stretching is used here to reduce the show-through noise from document images. Show-through noise affected image is shown in the Fig1 which is taken from DIBCO dataset. Back side of the document information is interfered with front side of the page is known as show-through effect. Contrast stretching method is used to enhance the image by increasing or decreasing the intensity values. Usually background pixels are lower intensity values than the foreground pixels.

Where a and b are arbitrary constants which control the brightness and contrast [3].

Noise filtering method is used to filter out the unwanted information from an image. In this project, we implemented median filter for the document image enhancement application.

The median filter method is very well suited in removing “salt and pepper noise” or “shot noise”. This noise represents as aimlessly occurring white and black pixels here and there of an image. Here it is used to smoothing the degraded document image. It is also called rank filter and works based on re-ordering mechanism.

Consider a 3×3 kernel in the matrix image. The Median value is calculated by arranging the neighborhood pixel values in numerical order, and select the middle pixel from the sorted list, then replace the pixel value into an output image. The noisy input image and smoothened median filtered output image is shown in the Fig.4. Compared with mean filter and median filter is good at preserving the edge pixels and higher kernel value will produce good smoothing.

In image enhancement technique, histogram plays an important role. It represents the characteristics plot of an image. If the histogram alters, image characteristics can also change. To remove the uneven illumination noise in document images histogram equalization is used here.

The Laplacian of an image is denoted by

f  and is given by the below equation2. Laplacian operator is 2nd order derivative operator. To find out the edges in document images here we used Laplacian transformation operation. Degraded original document image is converted into gray scale image. Then the noise is removed using Gaussian smoothing filter. The output of an image is convoluted with the Laplacian mask and is shown in the Fig9. It is also named as zero crossing detector.

1)       Global thresholding: This method creates binary images from grey level ones by turning all pixels to below the threshold value to zero and above the threshold value to one. Global thresholding method is a very fastest technique compared to other methods but it is not suitable for all type of document images in particular which document images contains picture object and text. Global method is expressed by the equation is below mentioned.

2)       Local Thresholding: It is also called as adaptive thresholding which selects an particular threshold value automatically for an image by each pixel based on the range of intensity values in its neighbourhood pixels. It examines the relationships between brightness of neighbouring pixels to adapt the thresholding according to the intensity statistics.

We have presented document noise reduction methods from degraded document images using image enhancement techniques like contrast enhancement, histogram equalization, median filtering, Laplace transformation and thresholding. In contrast enhancement, high contrast image gives the better results compared to low contrast image. For smoothing the degraded document image, here we used median filter. It can also use to reduce the salt and pepper noise and shot noise from document images. Histogram equalization method is used to reduce the non-uniform illumination. In Global thresholding, we manually selected the threshold value as 150, but in local thresholding it automatically selects the threshold value according to the input pixels. 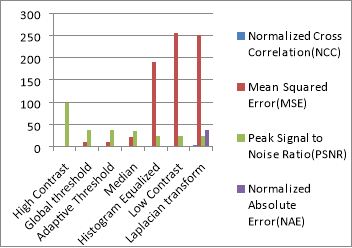