Actor Model of computation is a mathematical theory of computations that exist to solve the problem of concurrency in distributed systems. The actor serves as a process and communicates with other actors via asynchronous message passing. The actor models can be incorporated into any programing language either sequential or functional using CPS transform. Erlang is the most popular actor model and it has a separate toolkit(AKKA) for the actor model. Overtime, industry’s and technologies such as Twitter, Facebook and Microsoft have leverage on the actor model. Trending technologies like IOT and cloud computing have included the actor model to their technologies. With all these growths, the actor model has its own downside such as lack of inheritance and polymorphism. ESL (actor-based language) is in a growth stage to solve these challenges. System development methodology will be used to advance the ESL technology.

“One actor is no actor”. The actor model comes as a system where everything is an actor. The actors communicate by sending an asynchronous message to each other.

The actor model had been used as a tool to aid the understanding of concurrency and conceptual implications of concurrent systems.

The emergence of massive concurrency through client-cloud computing and many-core computer architectures has galvanized interest in the Actor model (Hewitt, 2009).

Before the invention of the actor model, Threads were used for concurrency. Threads faced challenges such as lost update; where different process tries to change the value of a variable at the same time and the use of a lock to solve this problem also created another problem called deadlock; happens when two process tries to obtain two locks at the same time. An algorithm representation is shown below.

The actor model provides a solution to the above challenges.

The actor model is a light-weight entity that has a state, thread of control, mailbox and a supervisor strategy. It is inherently concurrent.

2.1.1) The actor model of computation involves

As shown in the figure below, an actor consists of a mailbox where messages are stored/queue. A thread of control that gets messages from the mailbox for processing. And a state that changes when processing a message.

Actors can exchange messages to any actor known to them. These actors will only know about another actor if it created it or the actor was sent to it as a message. A message may contain basic data items, collections of data items, actors and function (Clark, n.d.). 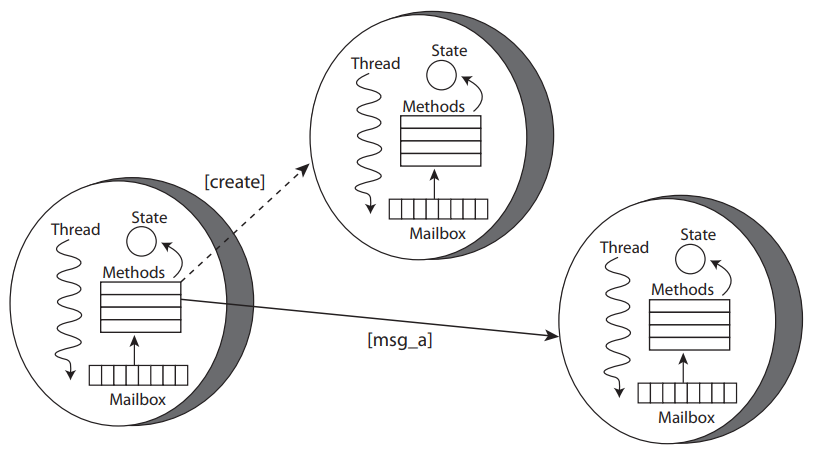 As shown illustrated in the figure above, actors do not have a shared state. They communicate via asynchronous message passing. An actor sends a message to another actor and continues without being blocked. The receiving actor stores the message sent to it in its mailbox. From which he processes messages one at a time in a single atomic step. The single atomic step execution of a message in an actor enables the macro-step semantics which is crucial in reasoning about actor systems passing (Shali, 2010).

In response to a message that an actor receives, an actor can concurrently 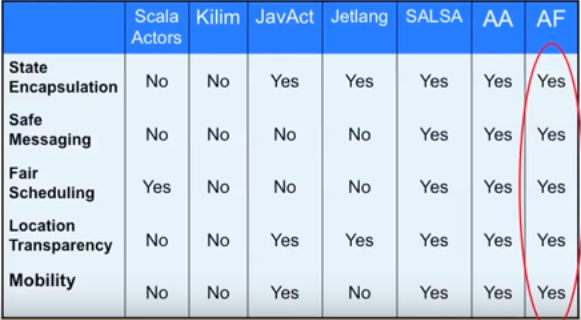 The figure above shows different languages and the trade-offs they have while trying to implement the actor model. Actor Foundry(AF) a programming language developed at the University of Illinois is one of the actor languages that adhere to all the actor semantic.

Another actor based model language currently being developed at Aston University is ESL. ESL is an actor-based functional language that aims to provide abstractions over an application that requires a high degree of concurrency (Clark, n.d.). It is a statically typed language. ESL provides extensions over the standard Actor Model, including shared state and access to the underlying Java platform, for practical application development (Clark, n.d.).

2.3) Practical implementation of the actor model

The actor model has gained popularity and has been implemented in many systems around the globe. Some of its implementations are in

The most significant aspect of the actor model is their inherent capability of maintaining their internal state in a virtual private thread isolated from the rest of the system. This makes actors superb for simulating IOT devices, each of which consists of its own state and control logic(Cheung, 2017).

Other implementation of actor model includes Molecular dynamics Charmm, Twitter, Image processing in Ms visual, Facebook chat system and a paper (Barat et al., 2017)that justifies how actor model could have been used to predict the effects of the demonization initiative in Indian.

Just like any other system, the actor model has its own weakness. Important programming aspect such as inheritance and polymorphism is something that needs to be worked on.  The ability of an actor to create multiple actors which may lead to spaghetti code makes it difficult to understand and testing becomes cumbersome.

Despite all this, the field is growing rapidly and big tech practitioners such as Twitter Facebook and linked built their systems on actor model and they found it to be very robust.

Another breakthrough which I am studying is the ESL language. Its currently the only language that is built using the actor model. Every aspect of it. This will give others a very good perspective on the strength of the language. With ESL a programmer will have to write way too less code that they have to write using other languages. ESL is still in its growth stage and it needs more work for it to compete with other development environment but with its features and rapid growth, the feature seems to be promising for both actors and ESL.