The requirement of longer processing time and larger memory makes FDTD method impractical for many cases. Implementation of parallel processing in FDTD method is proposed in this paper. The implementation depends mainly on computer architecture and programming libraries under different operating systems. In this paper a several performance tests of a one dimension FDTD code is tested in different platforms. The results shows that Parallel processing shows a linear decrease in time and larger data handling which makes it as a right platform for complex structures.

Computational ability has advanced in the recent few decades. One of the most common methods to solve Maxwell’s equations on arbitrary configurations of materials and field sources is the Finite Differences on Time Domain (FDTD) [1]. There exist a number of techniques for enhancing the performance of the conventional FDTD, in order to obtain accuracy the conformal FDTD method which simulates the curved perfect electrical conductor (PEC) [2,3]. Sub-gridding technique is used to increase the mesh density in the local area in which the field varies quickly [5,6]. The Multi-Resolution Time-Domain (MRTD) and Pseudo-Spectrum Time-Domain (PSTD) techniques are used to reduce the dispersion of the conventional yee grid [7,8]. The above techniques mentioned are used to improve the conventional FDTD technique for the purpose of reducing either memory requirements or simulation time. The parallel-processing FDTD accelerates the FDTD simulation by distributing the job to multiple processors, so that the available memory for large problems is virtually unlimited. At the same time, the simulation time is dramatically reduced compared to a single-processor implementation. On the computational point of view the parallel processing have an important advantage which makes the parallel executions strategies easier.

Parallel processing in computers is based on dividing a computer code into a number of segments and distribution of the task among a number of computers/processors, which are then executed in parallel. This may be achieved on hardware-level, software level, or both. Hardware-level parallelization necessitates alternative processor designs. Software-level parallelization can be either on data level or function level, depending on the characteristics of the code [9].

In this paper one dimensional FDTD code is developed for parallel processing. The performance analysis of the code developed is compared with both serial and parallel. The code is simulated in different platforms and the results are obtained. The results shows the efficiency of the parallel processing in handling larger data and reduction of time compared to serial processing.

The FDTD method is one of the well known approaches to solve Maxwell’s partial differential equations, because of its high versatility. FDTD algorithm is based on temporal and three-dimensional spatial discretization and it transforms the time-dependent Maxwell’s curl equations into a set of finite-difference relations [10, 11].Boundary conditions are needed on the edge of the simulation domain, among the several possible choices perfect matched layer (PML) boundary can be more accurate and the PML boundary is used in the developed code.

The one dimension FDTD starts with the formulation of the Maxwell’s equations,

The FDTD update equations are used to develop the Matlab code and the code is excited with the Gaussian pulse and the results are obtained.

According to the principle of FDTD algorithm, the electromagnetic field value at certain position can be decided by the value of last time step at this position and electromagnetic field value of this time step at nearby position. The electromagnetic field value has no direct relation to the values at position far from this point. So, the whole computational space can be divided into some sections that can be computed in some nodes of parallel computing system. The exchange of field values between nodes can be executed only at interface between sections. According to the basic concept, the computing between parallel nodes can be executed to simulate the serial computing in a single PC or workstation. This is the key point of our parallel FDTD algorithm. Fig.1 shows the methodology of serial and the parallel approach 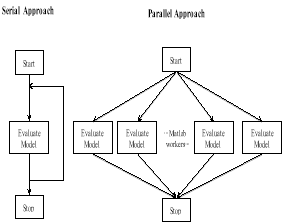 The main idea of parallel processing starts with the updating the EM field components in each processor in the same instant. When the computation updates a field component on the border of the domain, some values belonging to the border of the adjacent domain are required to avoid communications during the computations each sub domain is surrounded by the border cells of the other domain. These border values are communicated after the updating phase. Thus the parallel processing is achieved.

The first step of the FDTD modeling starts with the one dimensional method. A Gaussian pulse is generated in the centre of the problem space and the pulse propagates in the both the directions. The time step is taken to be 500 iteration steps and the total time required for the signal is 500fs. The time seconds are calculated by the time taken by the pulse to originate from the centre and to decay at the end. 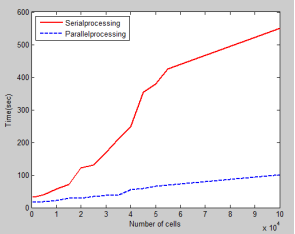 The parallel processing code developed has been simulated in various newer version Intel processors which is used to analyze the performance. The number of iterations are kept constant and the cell size is varied and the code is simulated in different Intel processors include i3, i5, i7 and Pentium processors. The results shows that the updated newer version i7 was able to process the data more quickly, so that the parallel processing can be used more efficiently in higher versions system which is easily available now a days. Figure 3 shows the Comparision with different versions of the processors. From the results it is observed that the i7 processor was able to process the code more efficiently than the others. Pentium processor which is one of the oldest among took larger time to process the code. 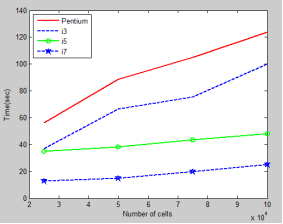 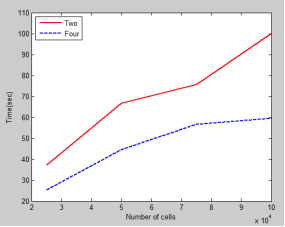 The speed-ups increase with the problem size because of the better exploitation of CPU resources and parallel processing. Figure 5 shows the achieved speed-ups for with respect to the serial algorithm running on the CPU. Thus the parallel processing gives a better speed up for larger problems. 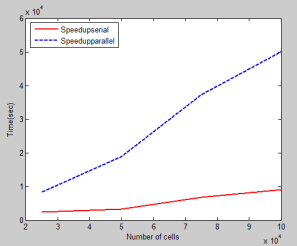 Figure 5. Speed up comparison for serial and parallel processing

From the figure 5 it is noted that the parallel processing gives a better speed up. With the previous results the number of iterations and the cell size is varied and the results are noted. For each cell size the iterations are changed and the values are noted. Figure 6 shows the speed up for different cell size at various iterations. From the figure it can be absorbed that larger the computation domain better the speed up thereby making the parallel processing very much suitable for larger computation domain. 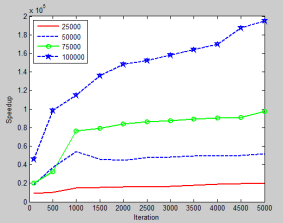 From the results it is observed that the disadvantage of the FDTD method can be overcome by using Parallel processing FDTD method. The performance analysis of this paper thereby shows that the parallel processing can be easily achieved efficiently by using modern CPU’s present today which can be used to do complex computations.