The development of the internet grows for every year, because of the easy access of the internet. The gain of the internet can be obtained through the smartphones, netbooks, notebooks. For processing the packets, network processor is used, and it will carry out the tasks as to convert the packets into fragments, reassembling these fragments, forwarding, encryption and packet classification. Due to increased line rates, pressure is increased on line rates and it in turn pressure on network processor. The pressure can be relieved in two ways:

So that it can be relieved in two different ways:

1.4 Organization of the thesis

Chapter 5, it covers the conclusion and future scope of the project.

Chapter 6, It lists the reference papers used for literature review of the packet classification.

The internet is a global system. It is consists of inter connected computer networks, which uses the protocols(TCP/IP), to match several billion devices all over the world. It is also termed as networks of network. Access of internet is a process of connecting mobile devices, computers and computer terminals to the internet. Internet access will enables the users to access the internet services such as email and world wide web. Using various technologies, internet service providers will access the internet. A packet is a formatted unit of data, which is carried by the packet switched network. By formatting of the data, the bandwidth of communication medium can be increased. The structure of the packet contains the two varieties of data

This will provide the information, on where to send the data. Example, It provides the source and destination IP addresses, sequencing information and error codes. Fig 2.1 shows the structure of the packet

Fig 2.1 structure of the packet

The maximum size of the packet is 64 K bytes. The payload of the packet is variable. Example IPV4 typically adds the 20 bytes of payload to every packet. The packet is passed through the network using three devices such as hub, switch and router.

2.3 The modes of information transmission through the internet 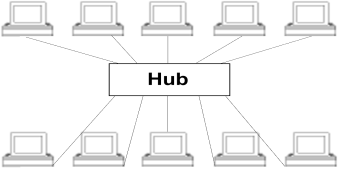 Fig 2.3.1 shows the structure of the hub

The switch is smarter compared to hub. First it creates the table, which records the IP/MAC addresses of the devices(PC’s) connected together. At the start, when any device sends the data, that time switch will not be knowing the destination IP addresses. So it will forwards the packets to all other devices, which are connected to it and it also records the IP address of the device. Next when packet belonging to those destination IP addresses comes, it will directly forward the packets to destination devices It is present in data link layer of OSI layer. Fig 2.3.2 shows the structure of the switch.

It is the smartest device compared to hub and switch. The router will record the address of all the devices which are connected to it. The router will read the information present in packet header and it will decide , where the packet needs to be sent and how to process the packet. It provides the security. While in hub, switch the destination IP address is known, hacker may hack the destination device, it will consider both destination and source IP address of the devices and it will decide whether the source device is hacker or not. If it is hacker, it will deny the packet. Fig 2.3.3 shows the structure of router.

Fig 2.3.3 shows the structure of router.

It consist of seven layer

The Fig 2.4 for OSI model is shown below as 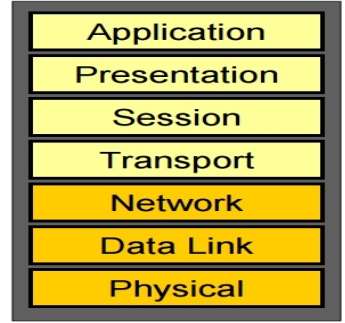 Application layer: This layer will provide the interface to application programmes.

The responsibility of transport layer are:

It is light weight and connectionless.

It is reliable and connection based.

The incoming packet to router will matches the specific rule if the distinct field in the packet will match corresponding field in the rule. There are three matches

2.5 The types of packet classification algorithms

Packet classification algorithm can be implemented in two major types

This can be used with general purpose processor and network processor. The software based algorithm can be divided into two types as

Field Independent Algorithm: For each field in the rule, these algorithms will build the index table separately.

Field dependent Algorithm: In these algorithm, the fields of the rule will be matched in dependent manner and there is no need to group the result in final stage. The memory requirement for these algorithms is less than field independent algorithms.

This is used with ASIC or with FPGA. This implementation is used with internet routers for the high speed that supports to handle the packet.

The reasons to use software implementation

Clock gating is a technique, which is used in synchronous circuits to minimize the power consumption. This technique is used to prune the clock, it disables the port of the circuitary, so that flip flops present in the circuitry will not switch the states. When switching is absent, the dynamic power consumption is reduced, but the leakage currents are present. Clock gating works by taking the enable signal of the circuitry, so that flip flops or devices present in latches will not switch the states, so that switching power reduces. So it is necessary to have enable conditions in order to get benefit from clock gating. The clock gating saves the power. Clock gating can be added in two ways:

It is group of data processing elements, which are connected in series, so that output of one element is the input to next element. We build a pipeline by dividing the complex operation into simple operation. Here instead of taking bulk thing and executing it, the bulk thing is break up into smaller pieces and process it one after another.

For example Consider a calculation c= log(|a+b|), which consist of three operations, which are shown in fig 2.7.

Consider a situation when we need to carry out for 100 such pairs. Without pipelining , it would take a total of 100*135= 13500ns. By realization, it is found that it is whole sequential process. Let the values evaluated to be a1 to a100 and we need to add values to be b1 to b100.

Algorithms are classified in 4 classes:

a. Linear search: This algorithm[1], is very simple. It contains all the rules. Here each packet is matched opposite to all the rules until the corresponding fields of the packet should match to the rule. Although, it is simple, it is not widely used. Because, it takes the large time for matching with the rule. Consider N is the number of rules, “the worst case space and time complexity is O(N),where O is the order and N is the number of rules. Fig below shows the linear structure.