The multiprocessor cores with multithreaded capability are continuing to gain a significant share and offer high performance. The use of OpenMP applications on two parallel architectures can identify architectural bottlenecks and introduces high level of resource sharing in multithreading performance complications. An adaptive run-time mechanism provides additional but limited performance improvements on multithreading and is maximized the efficiency of OpenMP multithreading as required by the runtime environment and the programming interface. This paper handles the task of data searching efficiently and a comparative analysis of performance with and without OpenMP is made. Experimental result shows accelerated performance over the existing methods in terms of various performance criteria.

OpenMP is an adopted shared memory parallel programming interface providing high level programming constructs that enable the user to easily expose an application task and loop level parallelism. The range of OpenMP applicability is significantly extended by the addition of explicit tasking features.OpenMP is used for enhanced portability computation, where a dynamic workload distribution method is employed for good load balancing. However, the search network involved in the Viterbi beam search is reported by [5] statically partitioned into independent subtrees to reduce memory synchronization overhead. It improves the performance of a workload predictive thread assignment strategy and a false cache line sharing prevention method is required. OpenMP is a collection of compiler directives and library functions that are used to create parallel programs for shared-memory computers. It combines with C, C++ or Fortranto create a multithreaded program where the threads share the address space and make easier for programmers to convert single-threaded code to multithreaded. It has two key concepts namely;

Sequential equivalence: Executes using one thread or many threads.

Incremental parallelism: A programming that evolves incrementally from a sequential program to a parallel program.

OpenMP has an advantage in synchronization over hand-threading where it uses more expensive system calls than present in OpenMP or the code efficient versions of synchronization primitives. As a shared-memory programming paradigm, OpenMP is suitable for parallelizing applications on simultaneous multithreaded and multicore processors as reported in [11]. It is an API (application program interface) used for explicitly direct multi-threaded, shared memory parallelism to standardize programming extensions for shared memory machines is shown in Figure 1.

At high-end, the microprocessors encompass aggressive multithreading and multicore technologies to form powerful computational building blocks for the super computers. The evaluation uses detailed performance measurements and information from hardware performance counters to architectural bottlenecks of multithreading and multicore processors that hinder the scalability of OpenMPin which OpenMP implementations can be improved to better support execution on multithreading processors. The thread scheduling based model with kernel and user space is shown in Figure 2.OpenMP applications can efficiently exploit the execution contexts of multithreading processors. The multi-threading models are;

Effects of OpenMP for Multithreading Process

The effects of OpenMP for multithreading process arelisted in Table 2.

The multithreading is required a solution which is scalable in a number of dimensions and achieve speedups. An efficient parallel program usually limits the number of threads to the number of physical cores that create a large number of concurrent threads. It describes the low-level Linux kernel interface for threads and the programs are invoked by a fork system call which creates a process and followed by an exec system call and loads a program to starts execution. Threads typically end by executing an exit system call, which can kill one or all threads.

M. Lee, et al., [2004] presented peak performance of SPEC OMPL benchmarks using maximum threads demonstration and compared with a traditional SMP. Zaid, et al., [2014] presented to implemented the bubble sort algorithm using multithreading (OpenMP) and tested on two standard data sets (text file) with different sizeF. Liu and V. Chaudhary [2003] presented a system-on-chip (SOC) design integrates processors into one chip and OpenMP is selected to deal with the heterogeneity of CMP.M. Sato, et al., [1999] proposed the compiler is installed to support OpenMP applications and GCC acts as a backend compiler.T. Wang, et al., [2004] presented the current flat view of OpenMP threads is not able to reflect the new features and need to be revisited to ensure continuing applicability.Cristiano et al., [2008] proposed reproducible simulation of multi-threaded workloads for architecture design exploration.Vijay Sundaresan, et al., [2006] proposed experiences with multi-threading and dynamic class loading in a java just-in-time compiler. Priya, et al., [2014] proposed to compare and analyze the parallel computing ability offered by OpenMP for Intel Cilk Plus and MPI(Message passing Interface). Sanjay and Kusum [2012] presented to analyze the parallel algorithms for computing the solution of dense system of linear equations and to approximately compute the value of OpenMP interface. S.N. TirumalaRao [2010] focuses on performance of memory mapped files on Multi-Core processors and explored the potential of Multi-Core hardware under OpenMP API and POSIX threads. 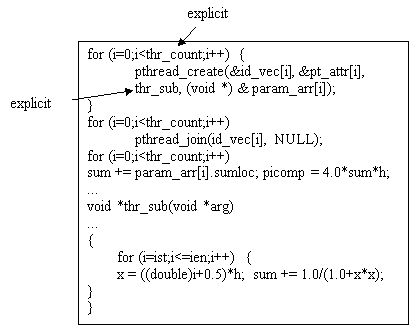 OpenMP supports loop level scheduling that defines how loop iterations are assigned to each participating thread. The scheduling types are listed in Table 3.

The selection of the optimal number of execution contexts for the execution of each OpenMP application is not trivial on multithread based multiprocessors. Thus, a performance-driven, adaptive mechanism which dynamically activates and deactivates the additional execution contexts on multithreading processors to automatically approximate the execution time of the best static selection of execution contexts per processor. It used a mechanism than the exhaustive search, which avoids modifications to the OpenMP compiler and runtime and identifies whether the use of the second execution context of each processor is beneficial for performance and adapts the number of threads used for the execution of each parallel region. The algorithm targets identification of the best loop scheduling policy which is based on the annotation of the beginning and end of parallel regions with calls to runtime. The calls can be inserted automatically, by a simple preprocessor. The run-time linking techniques such as dynamic interposition can be used to intercept the calls issued to the native OpenMP runtime at the boundaries of parallel regions and apply dynamic adaptation even to un modified application binaries. It modifies the semantics of the OpenMP threads environment variable,using it as a suggestion for the number of processors to be used instead of the number of threads.

Figure5:Search time without OpenMP (No Multithreading)

The percentage of improvement in data searching with OpenMP (multithreading) tools is given in Table 4 and its graphical representation shown in Figure 6.

Figure6:Improvement in data Searching with OpenMP (in %)

The time elapsed to write data in file which is experimented with OpenMP and without OpenMP (search data) shown in Figure 7 and Figure 8 respectively. 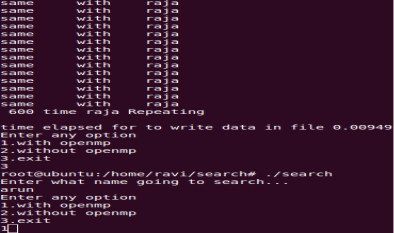 Searching a data in large data base has been a profound area for researchers. In this research work OpenMP Tools is used to perform multithreading based search. The motive to use OpenMP is that the user can specify a paralliazation strategy for a program. Here an experiment of data searching using multithreading is conducted for a data base. The experiments are conducted with and without OpenMP and their performance is presented. The results obtained shows that the time required for searching a data using OpenMP is less compared to data searching without OpenMP. The method presented shows improved performance over existing methods in terms of performance and parallaziation can be done in future. The main limitation of the research work is that its practical implementation requires same number of multicore units as that of the number of threads. Future research shall focus on use of parallel threads for high performance systems.