Abstract — One of the main drawback of Orthogonal Frequency Division Multiplexing (OFDM) system is its high Peak-to-Average Power Ratio (PAPR) of the OFDM signal. In this paper a novel non-linear generalized companding scheme called “Quadrilateral Companding Transform (QCT)” has been proposed to reduce the PAPR of OFDM signal. The proposed method provides additional degrees of freedom in comparison to existing trapezoidal companding, exponential companding and trapezium distribution based companding schemes. This allows more flexibility in designing the companding function, which is useful for the overall OFDM system to achieve low BER with good PAPR reduction capability.

The modern day phenomenon of increased thirst for more information and the explosive growth of new multimedia wireless applications have resulted in an increased demand for technologies that support very high speed transmission rates, mobility and efficiently utilize the available spectrum and network resources. OFDM is one of the best solutions to achieve this goal and it offers a promising choice for future high speed data rate systems [1], [2]. OFDM has been standardized as part of the IEEE 802.11a and IEEE 802.11g for high bit rate data transmission over wireless LANs [3]. It is incorporated in other applications and standards such as digital audio broadcasting (DAB), digital video broadcasting (DVB), the European HIPERLAN/2 and the Japanese multimedia mobile access communications (MMAC) [4], [5]. However, a major drawback of FDM systems is the high peak-to-average power ratio (PAPR) of the transmitted signals, resulting in the lower power efficiency, serious signal distortion and out-of-band radiation when the high power amplifier (HPA) is utilized.

Many companding schemes [17]-[23] have been proposed in the literature to reduce the PAPR of OFDM signal. The conventional μ – law and A-law companding schemes can be used for PAPR reduction, by choosing the suitable value of the parameters μ or A, controlling the nonlinearity of the μ -law [17] or A -law companding function respectively. But the error performance of both the schemes degrades as both of them introduce high companding distortion in OFDM signal at higher values of μ or A. A nonlinear companding transform [18] has been proposed by Jiang et al. to effectively reduce the PAPR of the OFDM signal. In this scheme [18], the Gaussian distributed in-phase (I) and quadrature-phase (Q) components of discrete time complex OFDM signal are transformed into a quasi-uniform distribution. In this scheme, the companding function is separately applied to I and Q components of the OFDM signal. The large values of I or Q components of the OFDM signal are compressed, whereas those with small I and Q components are enlarged. The PAPR reduction capability and BER performance of this scheme [18], can be optimized by properly choosing the parameters of the companding function. Jiang et al. proposed “Exponential Companding (EC)” scheme [19] to transform Rayleigh distributed OFDM signal magnitude into uniform distribution. Exponential companding has the advantage of maintaining the constant average power level in the nonlinear companding operation. However, the distribution of large signals is increased by the uniform companding, which makes the PAPR reduction was very limited under the bit error rate (BER) performance degradation. In this paper proposed technique transform the Rayleigh distributed OFDM signal magnitude into Quadrilateral distribution function as shown in figure 2 to achieve an additional degree of freedom over TC [22]. The parameters of quadrilateral distribution are chosen in such a way that it produces least possible companding distortion to achieve low BER for a given PAPR.

be the N complex modulated data symbols to be transmitted over N subcarriers. The discrete time domain OFDM signal generated after taking IFFT of a block of N modulated data symbols. Discrete time domain OFDM signal is passed through the parallel to serial (S/P) converter and then applied to the compander for reducing the dynamic range or PAPR of the OFDM signal. The companded OFDM signal is applied to digital to analog (D/A) converter to get analog signal and then finally amplified using HPA. At the receiver, the received signal is first converted into digital signal using A/D converter.

The digital signal is then expanded by inverse companding function known as decomapnding function. After that subcarrier demodulation is performed by taking the FFT of OFDM signal obtained from expander. Finally, M-PSK or M-QAM decoder is used to decode the received data signal. 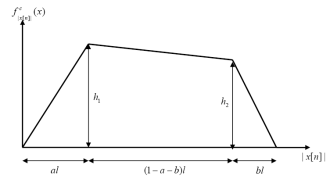 The symbols notation used throughout this paper are listed in Table 1 for convenience.

of quadrilateral trapezium distribution can be read from Figure 2 as

Quadrilateral distribution function is bounded in the interval [0,l]. Like EC, TC and TDBC, in this scheme also average power of the OFDM signal before and after companding is kept same, therefore we have 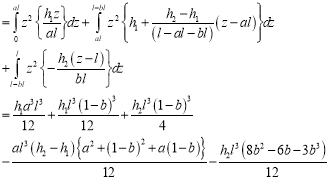 As shown in Figure 2, the PDF of quadrilateral trapezium companded OFDM signal lies in the interval [0,l] , therefore, we have,

For given values of l, a and b, the parameters ( h1 , h2 ) of the companding function h(x) can be easily calculated using (3) and (4). Therefore, three parameters (l, a and b ) can be chosen independently to control the nonlinearity of companding function h(x) . Hence the proposed QCT has three degree of freedoms. The values of l, a and b should be chosen independently to provide low PAPR and BER.

The expression of QCT function h(x) can be derived after equating the CDF of original and companded OFDM signal. Therefore, we have

is the CDF of original OFDM signal given by following: 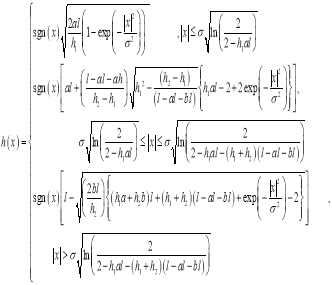 of the N-point Inverse Fast Fourier Transform (IFFT) of

are the OFDM signal sample over one symbol interval, or mathematically,

Where E [.] denotes the expectation operator. 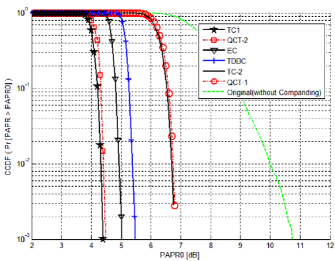 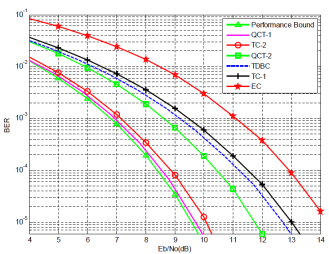