There are numerous cloud computing categories. This work mainly focuses on a public cloud. A public cloud is based on the typical cloud computing model, and its services provided by service provider [42]. A public cloud will comprises of several nodes and the nodes are in different physical locations. Cloud is partitioned to manage this large cloud. A cloud consists of several cloud partition with each partition having its own load balancer and there is a main controller which manage all these partition.

Algorithm for assigning the jobs to cloud partition as shown in Fig. 2

Step 3: if cloud partition state is idle or normal state then

Step 5: assigning the jobs to particular nodes based on the strategy. 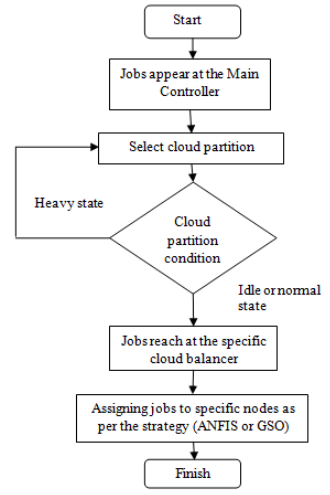 In cloud, Load Balancing is a technique to allocate workload over one or more servers, network boundary, hard drives, or other total resources. Representative datacenter implementations depends on massive, significant computing hardware and network communications, which are subject to the common risks linked with any physical device, including hardware failure, power interruptions and resource limits in case of high demand.

High-quality of load balance will increase the performance of the entire cloud.Though, there is no general procedure that can work in all possible different conditions. There are several method have been employed to solve existing problem.

Each specific method has its merit in a specific area but not in all circumstances. Hence, proposed model combines various methods and interchanges between appropriate load balance methods as per system status. Here, the idle status uses an Fuzzy Logic while the normal status uses a global swarm optimization based load balancing strategy.

When the status of cloud partition is idle, several computing resources are free and comparatively few jobs are receiving. In these circumstances, this cloud partition has the capability to process jobs as fast as possible so an effortless load balancing method can be used.

Zadeh [12] proposed a fuzzy set theory in which the set boundaries were not precisely defined, but in fact boundaries were gradational. Such a set is characterized by continuum of grades of membership function which allocates to each object a membership grade ranging from zero to one [12]. A new load balancing algorithm based on Fuzzy Logic in Virtualized environment of cloud computing is implemented to achieve better processing and response time. The load balancing algorithm is implemented before it outstretch the processing servers the job is programmed based on various input parameters like assigned load of Virtual Machine (VM) and processor speed. It contains the information in each Virtual machine (VM) and numbers of request currently assigned to VM of the system. Therefore, It recognize the least loaded machine, when a user request come to process its job then it identified the first least loaded machine and process user request but in case of more than one least loaded machine available, In that case, we tried to implement the new Fuzzy logic based load balancing technique, where the fuzzy logic is very natural like human language by which we can formulate the load balancing problem.

The fuzzification process is carried out by fuzzifier that transforms two types of input data like assigned load and processor speed of Virtual Machine (VM) and one output as balanced load which are required in the inference system shown in figure 3.2, figure 3.3 and figure 3.4 respectively. By evaluating the load and processor speed in virtual machine in our proposed work like two input parameters to produce the better value to equalize the load in cloud environment, fuzzy logic is used. These parameters are taken for inputs to the fuzzifier, which are needed to estimate the balanced load as output as shown in figure 3.4.

To affiliate the outputs of the inferential rules [13] , low-high inference method is employed. A number of IF-THEN rules are determined by making use of the rule-based fuzzy logic to get the output response with given input conditions, here the rule is comprised from a set of semantic control rules and the supporting control objectives in the system.

As shown above, there are 12 potential logical output response conclusions in our proposed work. The Defuzzification is the method of changing fuzzy output set into a single value and the smallest of minimum (SOM) procedure is employed for the defuzzification.

The total sum of a fuzzy set comprises a range of output values that are defuzzified in order to decode a single output value. Defuzzifier embraces the accumulated semantic values from the latent fuzzy control action and produces a non-fuzzy control output, which enacts the balanced load associated to load conditions.

The defuzzification process is used to evaluate the membership function for the accumulated output. The algorithm-1 is defined to manage the load in Virtual machine of cloud computing as follows:

When the status of cloud partition is normal, tasks arrives with faster rate compare to idle state and the condition becomes more complex, thus a novel strategy is deployed for load balancing. Each user desired his job in the shortest time; as a result the public cloud requires a strategy that can finish the job of all users with adequate response.

In this optimization algorithm, each glowworm i is distributed in the objective function definition space [14]. These glowworms transfer own luciferin values and have the respective scope called local-decision range . As the glow searches in the local-decision range for the neighbor set, in the neighbor set, glow attracted to the neighbor with brightest glow. That is glow selects neighbor whose luciferin value greater than its own, and the flight direction will change each time different will change with change in selected neighbor.

at its current location

and advertises the same within its neighborhood. The neighbor’s set

comprises of those glowworms that have comparatively a higher luciferin value and that are situated within a dynamic decision range and their movements are updated by equation (8) at each iteration.

is the sensor range,

is the neighbourhood threshold, the parameter

generates the rate of change of the neighborhood range. Local-decision range consist of the following number of glow:

position at the t iteration,

iteration.; the set of neighbours of glowworm

is defined above by a circular sensor range

Each glowworm as given in equation (10), i elects a neighbor j with a probability

and process toward it as:

is a luciferin value of glowworm

leads to the reflection of the accumulative goodness of the path . This path is followed by the glowworms in their ongoing luciferin values, the parameter

only ascends the function fitness values,

is the value of test function.

In this optimization algorithm, each glowworm is distributed in the objective function definition space [43]. These glowworms transfer own luciferin values and have the respective scope called local-decision range . As the glow searches in the local-decision range for the neighbor set, in the neighbor set, glow attracted to the neighbor with brightest glow. That is glow selects neighbor whose luciferin value greater than its own, and the flight direction will change each time different will change with change in selected neighbor. Figure 3.4 shows the flowchart of GSO algorithm.

In the context of load balancing for cloud computing GSO algorithm check the status of the server simultaneously if it is free. For example a user wants to download a file size of 50 MB. It checks by iteration if user gets entered in server, it gets the message as achieve target. 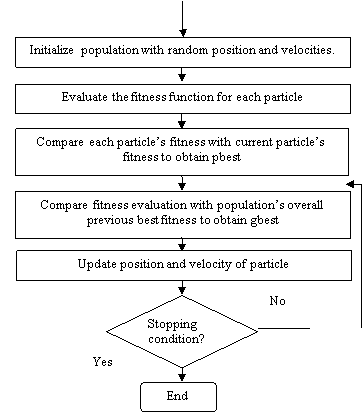