This paper deals with the modification of Playfair cipher.

The existing strategies of Playfair cipher are studied like those enforced on 5X5, 7X4 and 6X6 Playfair matrix.

The study of existing strategies shows that they suffer from many drawbacks like In this paper, the presented encryption mechanism makes the cryptanalysis a very complex process. This has been achieved by first, inserting all the 256 ASCII characters in a sequential order within a 32X32 matrix and, by changing the rotation mechanism for encryption and decryption.  The encrypted text obtained is almost unreadable. It is a symmetric substitution figure for example a solitary key is utilized for both encryption and unscrambling. A Playfair cipher uses a 5X5 matrix and encrypts pairs of letters called digraphs. The 5 by 5 table contains a key word or phrase. The table is generated by first filling in the spaces with the letters of the keyword without including any duplicate letters and then filling in rest of the letters in alphabetical order. „I‟ and „J‟ are set in same section with the goal that all the 26 characters can be filled in a 5X5 network. The encryption in a Playfair figure is finished by utilizing the accompanying procedure.

This process is also known as the conversion process:

1. If a digraph contains same letters then add an „X‟ between them and re-pair the letters.

2. If the letters of the digraph appear consecutively in a row then replace them with the letters to their immediate right. In case the letter is the last letter in the row, than replace it with first letter from the left of the same row.

3. If the letters of the digraph appear consecutively in a column then replace them with the letter to their immediate below. In case the letter is the last letter in the column, than replace it with first letter from the top of the same column.

4. If the letters are on different rows and columns, replace them with the letters on the same row such that, they lie in column of the other letter. Replacing the first letter of the digraph first.

• X is utilized a filler letter while rehashing letter falls in a similar pair are isolated.

2. Eliminate the repeated characters in keyword.

3. Construct a 32X32 matrix by filling the character of keyword from left to right and top to bottom. 4. Fill the token of network with the rest of the characters from ASCII esteems 0 to 255.

6. Separation the plaintext into pair of characters.

7. Add the character “Null” when odd number of characters are present in the message.

9. Shift the matrix from top to bottom towards left circularly by the first generated random number.

11. Generate another random number and rotate a matrix by making a left shift circularly with the generated random number. Then encrypt another digraph using the conversion process and so on.

12. Send all the random numbers generated to the receiver.

2. Eliminate the repeated characters in keyword.

3. Construct a matrix by filling the character of keyword from left to right and top to bottom.

4. Fill the reminder of matrix with the remaining characters from ASCII values 0 to 255.

6. Divide the ciphertext into pair of characters.

7. Add the character “Null” when odd number of characters in the message. Use the received random numbers in reverse order to rotate the matrix.

8. Use the lastly generated random number to rotate the matrix from bottom to top using right shift circularly then decrypt firstly the last diagraph.

11. Finally reverse the string and obtain the plaintext.

4. DEVLOPMENT OF THE MATRIX

The initial matrix would be developed by first taking a 32X32 matrix and then filling the matrix with all the ASCII values in a sequential manner. The complete matrix obtained has been depicted in Table 1 [7].  Let the keyword be: Play:5⇗. On inserting the keyword in the matrix, Table 2 is obtained. Let the plaintext be Dell. Since „l‟ occurs consecutively, we separate them with a „*‟ obtaining 3 diagraphs:

Initially, let the random number generated be 4 so that the matrix will be rotated circularly left by 4 positions as shown in Table 3. Now, to encrypt the second digraph the above obtained Table 3 is rotated by random number 6 (say) by which we obtain Table 4.

Using the conversion process on Table 4, the cipher text of the second digraph „l*‟ is obtained as „P+‟

Similarly, in order to encrypt the third digraph, the above obtained Table 4 is rotated by random number 8 thus, obtaining Table 5.

Using the conversion process, the cipher text of the third digraph „l‟* is also obtained as „P+‟.

The purpose of this example is to illustrate the functioning of a 9 x 9 of Playfair cipher matrix, but the concept can be extended to any size of matrix. The 9 x 9 Playfair cipher uses 9 x 9 matrix which contains the key at the beginning of the matrix. The key should not be more than 81 characters (pertaining to the size 9 x 9) decided by the security administrator.  Let us take the following example to understand the functioning of the 9 x 9 Playfair cipher. In the model, the key is “Playfair figure model”.

To put the key in the matrix, following steps are taken:

1. First, remove the spaces from the key.

2. Then, remove the duplicate character that is in the key.

3. Finally, insert the key characters at the beginning of the matrix followed by the rest

of characters that are not part of the key character.   The subsequent 9 x 9 grid is portrayed in Figure1. 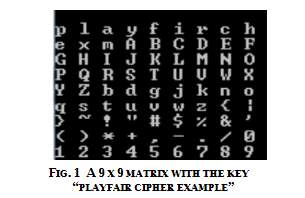 To encrypt a given plaintext using 9 x 9 Playfair cipher,

2. Replace the repeated letter by “AOX” and if the number of characters is odd, add “AOX” at the end of the plaintext.

FIG. 1 A 9 X 9 MATRIX WITH THE KEY “PLAYFAIR CIPHER EXAMPLE”

3. Break the plaintext into digraphs (groups of 2 letters), then apply the following rules to encrypt the plaintext:

a. If the two letters appear in the same row of the matrix, replace them with other letters

in the beginning of the row).

b.  If the two letters appear in the same column of the matrix, replace them with

letter that is on top of the column)

c. If the two letters are not on the same row or column, replace them with the letters on the

same line separately yet at the other pair of corners of the square shape characterized by the unique pair. The request is significant – the primary letter of the encoded pair is the one

that lies on a similar line as the primary letter of the plaintext pair. As an example, consider encrypting the plaintext “My bird is  on the  treeLU”. Replace  each  space  by  “BMW” and  replace  one  of  the  duplicated  letters  by  “AOX”  as

Then, encrypt each 2 letters separately as follows:

Note the in  the example  above, BMW  was used  to replace the spaces in the plaintext and AOX was used to replace  the repeated  letter  and  for  single  last  pair. The reason for doing this is the following.

So,  to  solve  the  above  problems,  three  different characters were used to replace the spaces in the plaintext and to replace the repeated letter and for single last pair.

Let  us  see  how  each  pair  in  the  above  example plaintext will be encrypted. The resulting ciphertext will be as follows:

To decrypt the ciphertext on the receiver side, use the inverse (opposite) steps that were done in the encryption side, and the original correct plaintext will be recovered.

3. RESULTS AND ANALYSIS OF VARIOUS MATRIX SIZES FOR THE KEY

Different  sizes  of  the  matrices  for  the  key  were implemented  ranging  from  9  x  9  to  11  x  11.  The characters  contained  in  these  matrices  (without  any specific key) are shown in Figures 4(A) and 4(B) for 10 x 10 and 11 x 11 respectively (note that an example of 9 x 9 is already given in Fig. 1, but with a specific key, although all 81 characters are there).  Accordingly, a 10 x 10 matrix contained 100 characters, and an 11 x 11 matrix consisted of 121 characters.  Two set of experiments were done. In the  first set,  the plaintext  was variable  but the key was kept the same. In the second set, the plaintext was kept the same but the  key was changed. For both sets, avalanche effect  was  measured.  Avalanche  effect  measures  the change in the output when the input or the key is slightly changed [13].  Details of these experiments and results are given below. The change in the output characters ranged between 1 and 12 characters.  A clearer picture of the trends is visible which shows that an increase in the size of plaintext does not contribute much to the avalanche effect. The reason for this is that there is only one-bit change in the whole plaintext input, and this one-bit change does not depend on the size of the plaintext.  Moreover, it is also observed that for all three matrix sizes, the biggest change was observed for plaintext of 75 characters. This could be attributed to the structure of the plaintext itself, which, in this case, might have a strong impact on the output due to the particular key selected for encryption.

In 5×5 Playfair cipher, cryptanalysis is done through two processes. First is brute force attack and second is frequency analysis. In brute force attack we apply several permutation and combinations while in frequency analysis number of occurrences of letters in English alphabets are found and compared to maximum occurrence of each letter in plaintext. Also, the number of permutations applied on each digraph is 676 combinations, which can be easily broken in few hours. But in 32×32 Playfair, as we are using all the 256 ASCII values which will take more time to apply brute force attack.

The implementation of advanced encryption algorithm generates cipher text which is very complex. It is concluded that by changing the encryption mechanism by including a random number, the complexity of the encrypted text can be significantly increased.

Playfair cipher has a strong potential for usage in wireless and mobile communications in which the sender is constrained by limited power. This potential of Playfair cipher lies in its simple design which allows for less power consumption than more complex algorithms such as RSA, DES, and AES. The results indicate that the avalanche effect does not depend on the size of the plaintext itself.  However, there may be notable changes in the output with plaintext of certain sizes, but no change with other plaintext of the same size. This strongly depends on the plaintext itself and the order (position) of the characters it contains in the matrix.  Furthermore, bigger key sizes have a stronger impact on the output compared to smaller key sizes.

The above depicted table clearly shows the difference between existing methods of encryption used in 5X5, 6X6, 7X4, 32X32 matrix and proposed method that changes the encryption mechanism and increases the key size.

The advantages of proposed method can be enlisted as follows: