1) Self service capability- No need to keep hardware and software maintenance staff.

2) Scalability-Its easier for organisation to expand. They can use infrastructure according to there requirement in case of need to expand they can request for more infrastructure from the cloud provider.

4) Affordability-It saves considerable amount of money for organisations as they won’t have to buy million-dollar servers.

Now with Internet of things (IOT) being widely used, it has a new set of requirements, which are:

1). Realtime processing of sensor data, the communication latency between end devices and DCN might prove to be bottleneck.

2). As most of IOT devices have agile nature, mobility support is necessary.

Edge computing is an attempt which over come these shortfalls, it leverages the storage and computation capacity of large number of mobile, wearable devices or sensors. It acts as a layer between end devices and cloud.

As these “Edge devices” handle requests locally rather than sending it to cloud, this reduces the latency in resolving the requests and allows real-time handling of the requests. Also due to abundance availability of edge devices it supports mobility [1]. We can say Edge computing also known as edge, helps in bringing the processing close to the data store thus eliminating the need to send data to remote cloud or server for processing. 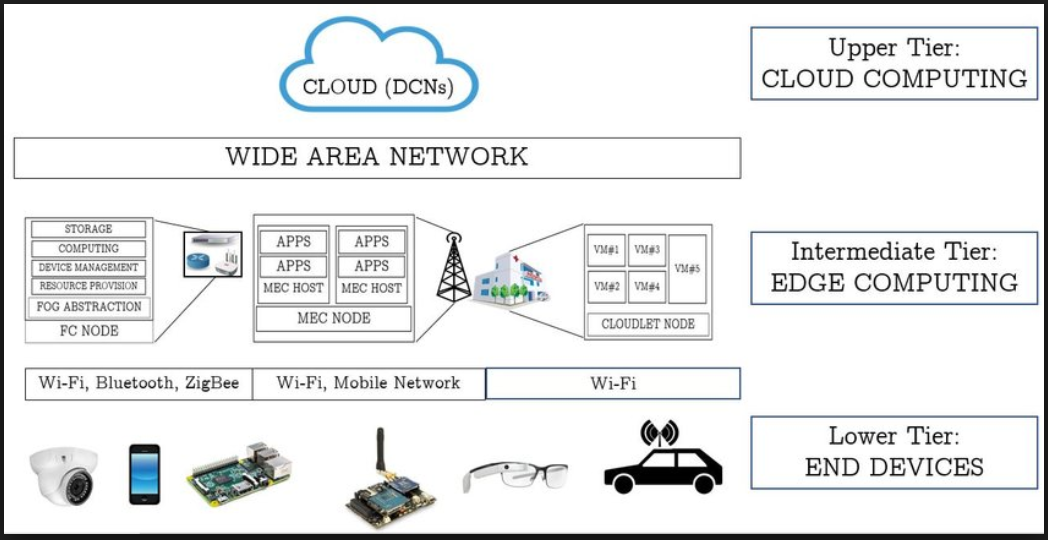 This implementation of edge layer can be classified as Mobile Edge Computing (MEC), Fog Computing (FC) and Cloudlet Computing (CC).

M. Satyanarayana coauthored an article with Paramvir Bahl, Rámon Cáceres, and Nigel Davies that laid the conceptual foundation for edge computing. They presented a two-level architecture, in which the first level represents present day cloud infrastructure and second level is dispersed elements called cloudlets which have state cached from first level clouds. This cloudlet concept can be expanded to multilevel cloudlet hierarchy. Flavio Bonomi and his colleagues in 2012 introduced the term fog computing to refer dispersed cloud infrastructure, where data is cached from main data server [1]. Also, we can say, one of the standards to implement edge computing is called fog computing, it helps for computation, storage and networking between the devices and centralised cloud data center. Fog extends the cloud infrastructure close to devices that produce and act on IoT data. Fog nodes can be deployed anywhere within the network, with data producing devices. We can say any device which can compute, store and has network connectivity can be called fog node [1].

Cloudlet is a sub part of a cloud that is placed close to end nodes, it has data cached from the cloud, thus helps in reducing time to fetch data from main cloud. Also, we can define Cloudlet as a resource rich system placed close to mobile devices and connected through internet.

Proximity of cloudlet matters because it helps us achieving goals like [4]:

The growth of internet has truly transformed the business all over the world, saying this the speed, availability and integrity of network is very crucial for every stakeholder. Before Content delivery network (CDN) was implemented every request was send to main web server to be processed, this in turn increased latency. Also, at times when multiple requests were sent to a particular website, due to congestion affecting its availability. In order to overcome this problem, accelerating the web performance CDN was suggested as a solution, it was introduced by Akamai in late 1990s [4] [3]. CDN is network that supports caching of main server data to multiple CDN servers placed close to the end users, thus reducing latency. CDN’s have helped in achieving a better Quality of Service (QoS) and Quality of Experience (QoE) to their customers. These CDN nodes placed closed to users with prefetched, cached data reduce latency to a great extend and video caching saves a lot bandwidth [4]. Also, these nodes can help in building location relevant advertising, thus helping advertisers to reach the relevant audience. Over the years CDN have increased in number and size, over a third of internet traffic is being served by CDN’s, it is expected to carry over a half in near future [5].

Edge computing shares roots with CDN, as mentioned earlier back in late 1990’s when akamai introduced CDN to accelerate web performance, it uses nodes close to the end user. Edge computing extends the same concept by leveraging the cloud infrastructure. For both the proximity to end user is crucial being just limited to caching web, where as cloudlet run arbitrary code just as in cloud computing.

1) . Both CDN and Edge computing are concepts build around bringing nodes close to user edge.

2).  Both help in reducing latency.

3).  Both Reduce load at main server by distribution of traffic.

4).  In both concepts the proximity of node to end users is crucial.

Apart from connectivity network service providers also provide network functions like network address translation (NAT), Firewall, Encryption, DNS and caching. Initially all these functions were hardware embedded at customer side. So, bringing new technologies in this architecture was extremely difficult as hardware appliances held a proprietary nature, it was difficult to maintain it, it required professional support to this, and new implementations needed hardware changes too. So overall the problem with this architecture was:

Service providers began exploring new ways to do so, which laid stone to foundation of Network function virtualization (NFV). NFV decouples hardware and functions and transfers these functions to virtual server.

There are many benefits of doing NFV:

A VNF is the NFV software instance consisting of a number or portion of VMs running various network function processes.

Content delivery networks (CDN’s) currently server more a third of all internet traffic and is expected to increase at higher rate and cover over a 71% of internet traffic according to Cisco Visual Networking Index (2016-2021), most of the traffic will be IP video traffic therefore it becomes essential to meet the requirement of growing users by distributing the content in efficient manner [1] [8].Video contents can be transcoded and decoded but this process needs lot of computation capabilities

Researchers have been looking at the potential of CDN for developing large scale video transcoding platform. Also, NFV is gaining attention in many research fields, CDN slicing being one them [4] [16][8]. In virtual CDN slices, transcoding servers are considered as VNF that are hosted in virtual machines and can be instantiated in different cloud domains. There many factors like Quality of Experience according to which optimization of cost associated with deployment of virtual transcoders.

CDN as a Service (CDNaaS) is a VoD platform that focuses on creating CDN slices across multiple cloud domains and life cycle management. CDN slices have following components:

Every CDN slice has number of VNFs running on virtual machines hosted on a multiple cloud platform. They are administered by one coordinator that manages the different VNFs of slice and ensure that they can communicate effectively.

The main components of CDNaaS platform are:

The solution to provide the management for transcoding high volume of media files is provided through this framework through heterogeneous transcoding nodes distributed over multiple cloud domains.

The architecture of proposed solution is mentioned below:

Knowledge base: It acts as database to manage and store the data. For CDNaaS, it focuses on building strong knowledge base by storing all the previous transcoding results and information.

Transcode Orchestrator (TO): Global optimization is major responsibility of this component, generally hosted on separate virtual servers.TO has two components that are KB and Balancer. Balancer is used to retrieve data from KB for generating machine learning predictive model. The main function of TO is to distribute the video uploaded to CDN slice to multiple VNF-Transcode nodes.  Based on prediction it assigns transcoding jobs to nodes which can efficiently process the given job after proper utilization of given resources.TO server keeps track of performance of all nodes and assigns the jobs accordingly to optimise CPU and memory utilization and thus reduced transcoding time.

The focus is to benchmark the performance of VNF-Transcoder based on FFEMPEG software by varying different parameters.

Input- Number of videos arrived and