An immune system, one of the most intricate biological sys-tems, has been used as a metaphor for intelligent computation in a variety of domains. Artificial Immune System (AIS) has been considered as a family of techniques originated from the community of immunology. As an important constituent of the AIS, the artificial immune networks are based on the principles of the behaviors of both B cells and T cells in the biological immune system. B cell is an integral part of the immune system. Through a process of recognition and stimulation, the B cells can clone and mutate to produce a diverse set of antibodies in an attempt to remove the infection from the body. T cell has two types. One regulates and con-trols the strength of the immune response, and the other di-rectly destroys the cells that have specific antigens. Both the B cells and T cells have been widely employed to solve a wide range of engineering problems, such as anomaly detection and data mining. This paper aims at giving a concise overview on the artificial immune network models including their theory, structures, and applications.

Functions, principles and models, which can be applied to real world problems. According to the mechanis of DCs, the Dendritic cell Algorithm (DCA) has been put forward by Greensmith and successfully applied to a range of problems, particularly in the area of anomaly detection

Compared with the classical AIS algorithms , the DCA has advantages of small calculations, strong recognition ability and few training samples, but it also hasthe defect that it will have promising detection accuracy onlyin ordered data sets, with the increasing of the disorder degree in data sets, the accuracy will reduce and the false positives and the false negatives will increase obviously. Experiments show that except some noise data most of the

mistakes occur during the transition phases, this is because during a transition phase there is a small degree of confusion regarding temporally and spatially clustered antigens and DC may sample multiple antigens in different types of context.

The Dendritic Cell Algorithm (DCA) is a second generation Artificial Immune System (AIS) algorithm. It is based on an abstract model of the function of dendritic cells and their ability to discriminate between healthy and infected tissue . As a context-aware anomaly detection algorithm, the DCA performs well in malware detection. Current research with this algorithm have suggested that the DCA shows not only excellent performance on detection rate, but also promise in assisting in reducing the number of false positive errors shown with similar systems.

However, as the defenses evolve, so does the malware. The DCA distinguishes between normal and potentially malicious antigens on the basis of the concentration of danger signals they cause and neighboring antigens. This feature cabe exploited by crafty malware via mimicry attacks (such as blending with normal activities or mimicking normal behavior) to evade detection by the DCA . For example, some stealthy malware communicate with remote servers only when they detect user activities (such as requesting web pages). This reduces both the frequency and significance of malicious behavior, making the malware less active and more likely to avoid detection by the DCA. In , Gu et al. proposed an improvement for the DCA namely antigen multiplier to overcome the problem of ‘antigen deficiency’. As an additional function of the DCA, antigen multiplier can make several copies of each individual antigen which can be fed to multiple dendritic cells (DCs). Then the classification decision is averaged over the replicated population. The experimental results showed that antigen multiplier helped in improving the classification accuracy. But, as antigen multiplier copies every antigen it meets indifferently, it may show less resistance to mimicry attacks since the concentration of potentially malicious antigens is not increased. Similar to the inefficient detection to hidden and inactive malware by the DCA, biological immune system (BIS) also shows inefficiency when responds to some antigens.

In this research paper [1] the author has analysed the immune theory and hopfied neural network (HNN), them proposing a new algorithm for multidimensional functionality. A group of solutions are collected for analyses using k means algorithm. Then later on the cluster is taken which is cluster centurions by k means algorithm. In this paper, by making use of the advantages of clustering analysis algorithm, HNN and ia, a new algorithm is proposed to solve the optimal problems of multimodal function with high dimensions. Simulation experiment proves that the new algorithm has much higher accuracy and shorter running time, compared with ia. Especially, at high dimensional function, the new algorithm has clearly advantage.

In this paper[2], a novel multi-modal optimization algorithm, namely Dcopt-aiNet is proposed, which is based on biological immune network mechanism for global numerical optimization. Different from de Castro’s opt-aiNet algorithm, Dcopt-aiNet models cloning operation using dynamic cloning operation which is adopted from biological immune network mechanism. Based on the multi-modal benchmarks, experiments were carried out to compare the performance of Dcopt-aiNet with that of opt-aiNet. Experiment results show that when compared with the opt-aiNet method, the new algorithm is capable of improving search performance significantly in successful rate and convergence speed.

In this paper [3] the author has proposed the the use of DCA for malwre detection. Artificial adjuvants increase ‘immunogenicity’ of stealthy malware which speeds up the immunigenicity of them. This is how they improve the malware detection with help of DCA. Future work proposed in this paper is that the experiments need to evaluate their effects on enhancing the detection performance of dca. Further we need to better understand the mechanisms of immunological adjuvants can be beneficial to design more biologically. Lastly to make more diverse and more general algorithms.

In this research paper[4] the algorithm is posed to only good in ordered data set but the results in the other cases are not considered to be great. In instances of different antigens, each instance is accesed and finally all the asessments made are taken into account. Proposed algorithm i.e. Mmdca brings up the nature of each multiplier and also it can be inferred that the false positives is higher, this is because the dca weights matrix used to calculate the semi and mat tends to mat.

With the intrinsic properties of multimodal optimization problems, a multi-population artificial immune network algorithm (mopt-aiNet) is proposed to improve the performance of static and time-varing multimodal optimization problems by making use of biologic immune mechanism in this paper[5]. Compared with other immune network search methods, several novel operations such as multi-population dynamic hypermutation, asynchronous colony evolution, dynamic memory solutions management and a hill-valley exploring are designed which can speed up searching the environment in an optimal way. Two other immune network algorithms are compared against mopt-aiNet by using static and dynamic benchmarks. Comparative analysis illustrates mopt-aiNet’s potential value.

A bi-objective optimization model of power and power changes generated by a wind turbine is discussed in this paper[6]. The model involves two objectives, power maximization and power ramp rate (PRR) minimization. A new constraint for power maximization based on physics and process control theory is introduced. Data-mining algorithms were used to identify the model of power generation from the industrial data collected at a wind farm. The models and constraints derived from the data were integrated to optimize the power itself and the power variability, expressed as the power ramp rate. Due to the nonlinearity and complexity of the optimization model, an artificial immune network algorithm was used to solve it. The optimization results, such as computed operation strategies and the corresponding outputs, are demonstrated and discussed.

In this paper [7] , the problem of finding the optimal collision free path, path planning for the case of a controllable mobile robot moving in a static environment filled with obstacles with known shape and size is studied. A path planner based on a hybrid memetic algorithm, Genetic Artificial Immune Network (GAIN), which provides near optimal collision free path is proposed. Genetic Artificial Immune Network is a hybrid memetic algorithm based on Genetic Algorithm (GA) and Artificial Immune Network (AIN) algorithm. The network cell structures are simple which makes the operators simple and results in a fast calculation with smaller number of cells. The results obtained from GAIN is compared with that of GA and GAIN is found to outperform. GA in terms of convergence speed and result obtained, making it a promising algorithm for solving the mobile robot path planning problem.

Adaptive immunity is directed towards specific invaders; either seen before or not previously encountered and gets modified by exposure to invaders. It mainly consists of lymphocytes (white blood cells, more specifically B and T type) that aid the process of recognizing and destroying specific substances, and are antigen-specific.

Clonal Selection: Clonal selection theory was proposed by Burnet. The theory is used to explain basic response of adaptive immune system to antigenic stimulus. It establishes the idea that only those cells capable of recognizing an antigen will proliferate while other cells are selected against. Clonal selection operates on both B and T cells. B cells, when their antibodies bind with an antigen, are activated and differentiated into plasma or memory cells. Prior to this process, clones of B cells are produced and undergo somatic hyper mutation. As a result, diversity is introduced into the B cell population. Plasma cells produce antigen-specific antibodies that are work against antigen. Memory cells remain with the host and promote a rapid secondary response.

Negative Selection :Negative selection is a mechanism to protect body against self-reactive lymphocytes. It utilizes the immune system’s ability to detect unknown antigens while not reacting to the self cells. During the generation of T-cells, receptors are made through a pseudo-random genetic rearrangement process. Then, they undergo a censoring process in the thymus, called the negative selection. In this process, T-cells that react against self-proteins are destroyed and only those that do not bind to self-proteins are allowed to leave the thymus. These matured T-cells then circulate throughout the body performing immunological functions and protecting the body against foreign antigens.

1. To study intuitively and understand the working of dentritic cell and immune networks technique in artificial immune systems.

2. To analyse the two above mentioned techniques on the basis of the following parameters:-

3. Mathematical and graphical comparison between dentritic cell and immune networks.

Its principle is taken up from the original dentritic cell mechanism in the human body with which our human immune system works. It generally takes advantage of the remembering power of our body in which if our body if exposed to a certain infection remembers it prevents it from harming us in at least near future, it also may cause permanent prevention. 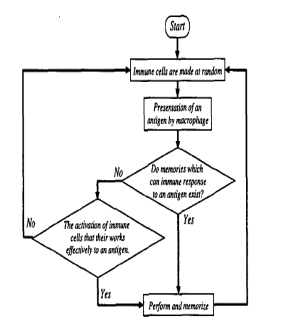 Its principle is taken up from the immune network mechanism which does not have fixed idea for prevention of particular disease in all senses. It undoubted takes up a more robust way of finding the right vaccine or the attack example for actual prevention. 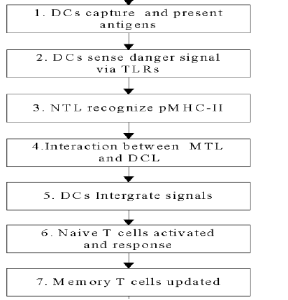 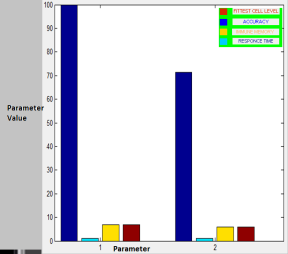 Bar graph for less no of attacks 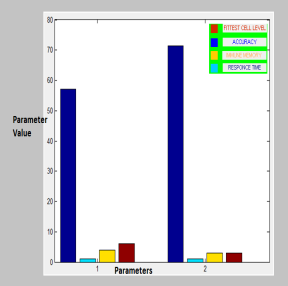 Bar for all attacks 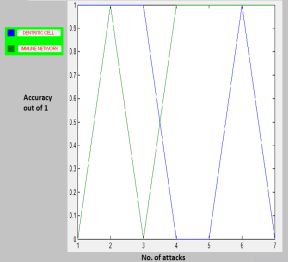 Plot for less no. of attacks. 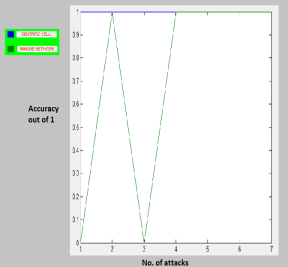 Plot for all attacks.