Non functional requirements define the frame work within which the system should work.

The controlling and monitoring of the devices can be extended to, many other devices apart from house hold equipments, like vehicles and security systems etc. 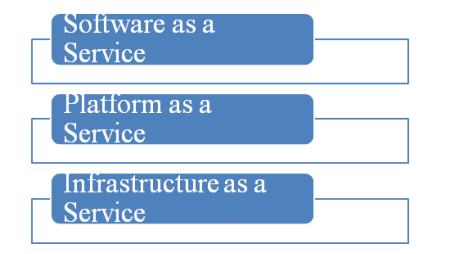 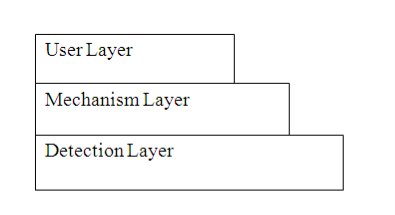 In the present scenario of the internet environment the layer is as mentioned above in the diagram 3.2 and for the maintenance of the devices with remote control in cloud environment the developer need to select the proper services in the cloud to satisfy the requirement of the customer and SaaS is one of the most suitable and earliest services provided in the cloud and using these service the user can directly connect to the cloud and with the help of browser we can directly run the application residing on the cloud and advantage of these service is that the service provider is responsible for the maintenance of the services weather it is hardware or software and is charged as per usage or free of cost. Neither the developer nor the user needs to worry about the upgrades, installations, attacks etc. And more importantly one need worry about the initial investments and license approvals.

The present scenario in the cloud is that some providers are giving customized clouds to the companies, for the user the cloud is always free but the companies need to build their own cloud computing services for e.g.: FeiBit corporation as launched a cloud recently and meets almost all requirements of its customers.

The name ZigBee was given to the device because of observing the procedure of bees flying and the dance of the bees was in the shape of Z and the bees are very small and hence the amount of energy that is needed to transfer the pollen is also less keeping this features in mind they named the device as ZigBee as it has features like less consumption of energy, low price, small size but works very efficiently and its IEEE standards is 802.15.4 and it creates the wireless personal area network for the communication purpose.

When the IEEE standard was given the agreement was also made which is divided into two parts and hence according to the agreement the 804.15.4 will define the two layer one is the physical layer and the other I the MAC (media access control ) layer and the ZigBee alliance will define the specifications for the network, security and application layer and later the ZigBee stack also was defined that helps in communication and these was defined by individual layers protocol which was grouped together to which it gives the user API and this can be used to coordinate among many of the sensors for the purpose of communication and can also send data form one sensor to another and hence the energy consumed is very less in this process and communication efficiency is very high and hence due to this the remote controlled equipment can be controlled and monitored efficiently. 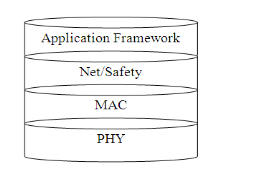 The ZigBee as the capability of the self organizing networks for proving this scenario take the e.g.: as follows where the group of paratroopers in which each group member as the ZigBee devices with them and then they land on ground they can connect each other in the forest if they have landed with the range in which the ZigBee devices can communicate and moreover the module can identify the device and contact the person and hence this is the special property of the ZigBee where clearly we can find the property of self organization.

We can also use ZigBee in the industry but cannot always guarantee the usage of channels which are unblocked, like the lights in city streets, car accident, etc. the emergence of road traffic is interrupted due to accident, likewise with the usage of channels in industry and hence self organization of the network is very important because of the errors that may occur during the transmission of the data.

The paths are not always set for sending the data and hence one as to find the path that is best and short and send the data in that path in the network, but if the desired path is blocked due to traffic then the data needs to sent in the other path so that it reaches the destination correctly and here in ZigBee the so called dynamic routing for data transmission is used for the sending of the data in the network.

The ZigBee works with using the technology called the DSSS (direct-sequence spread spectrum) underlying which is the non beacon mode and the ZigBee network can be expanded that is scalable, within one second or even in less time the node joins the network and rejoins the network again and starts the transmission and hence this is very less rime when compared to Bluetooth which takes around three seconds and ZigBee has high reliability in networks and it supports multicast and broadcast applications and the ZigBee is one of the major network in today’s communication technology and also its importance is increasing day by day due to its distinctive application in many fields like health, sports etc.

The access to the cloud computing platform is free of cost and hence through this platform the developer can use ZigBee wireless sensor technology via the gateway through which it is connected to the internet and from there the information reaches the cloud through GPRS and the cloud here provides the real time accessing and monitoring of the data that is acquired through the sensors data socket communication and this real rime monitoring depends only upon the internet or network environment, without increasing delay time. And the cloud platform today supports the latest technology like html5 technology and hence this is a boon to many of the companies and customers and life is much simpler and easier with the upgrading technology.

System design specifies the flow chart, block diagram, which gives the outlay for the system and also helps in the constructing the project and implementing it so that the desired output can be obtained.

The below figure 4.1 explains the overall block diagram of the work done, 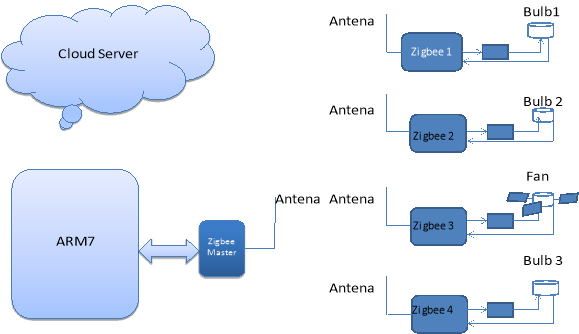 The operations involved here consists of mainly two modules one is the transmitter and the other is the receiver and the transmitter has many sensors connected to it which include light intensity, temperature, motion detection sensors etc. here the data acquired by the sensors are uploaded to the transmitter through which the data is remotely passed to the receiver and from heir the data is uploaded to the cloud in serial form and the data in the cloud is displayed using the ASCII format and this data can be stored in the cloud drop box and the data in the cloud can be seen anywhere but the internet connection is mandatory and there is a graphical user interface that is been developed using the visual basic/dot net and through that also we can see the output when the server is turned on.

The design of the cloud data base centre is as shown below,

4.1.3 Functioning of the System

The block diagram is as shown below which gives the description of the entire work carried out, 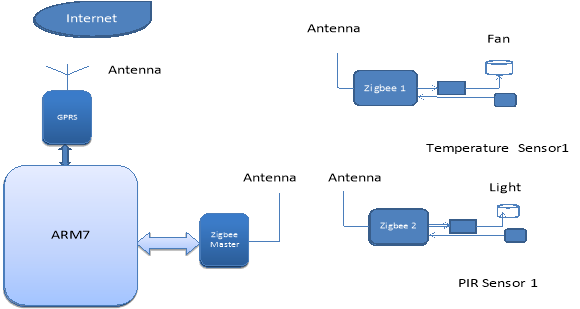 The Above Figure (4.3) works in the same as described in the Functioning of the System, this is the method in which the devices in the house can be remotely accessed and controlled over the internet, in the other phase the world is facing the shortage of energy in terms of oil, water etc. and hence how to make use of the resources is one of the big challenge, hence this proposed system helps in the utilization of the resources efficiently.

4.1.4 Block Representation of the Diagram

The below figure 4.4 represents the block representation of the diagram of the system design 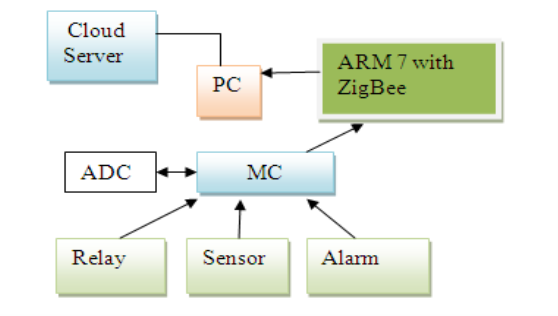 where one recognizes the relays, sensors, alarms for motion detection are connected together to Microcontroller and the microcontroller is connected to the ADC (analog to digital conversion) where the data from analog form are converted to the digital form and the data obtained after conversion are sent to the ARM 7 board where the data is been transferred and also received through the ZigBee where the received data is stored in the cloud and the data can been seen the cloud with the help of PC.

Hence from these design we can see the overall working blueprint of the system which also recognizes to be one of new technology with the combination of both hardware and software and hence this technology is one of the upgrading and ever growing technology in the field of internet of things (IoT).

4.1.5 Data Flow Diagram of the System 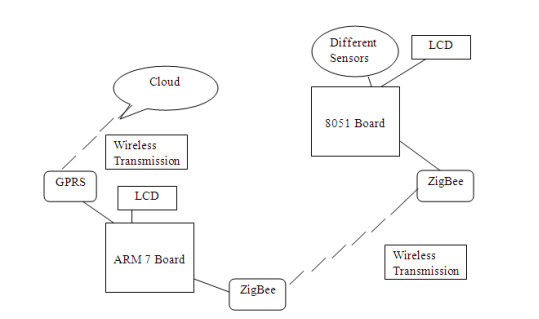 The data flow diagram is as shown above in figure 4.5, that consists of two boards, and there are one ZigBee’s attached to each of the boards, the 8051 board has different sensors attached to it which will monitor the devices in the house and this status is fetched by the ZigBee and transferred wirelessly to the ARM 7 boards ZigBee and then the GPRS which is connected to the cloud uploads the data , by the information obtained through ZigBee and the data can be viewed by the end user and hence the status of the devices data obtained are visible on the LCD screen attached to both the boards.

4.1.6 Flow Chart Representation of the System

Hence the working of the system is represented in the terms of flow chart and this system is considered to be one of the advanced technology through which the devices in the house can be controlled and monitored through cloud.

Figure 4.6: Flow Chart of the working of the system

In the below two pictures we can see the pictures of the 8051 and ARM 7 circuit boards,

The picture 4.7 below represents the 8051 micro controller board, 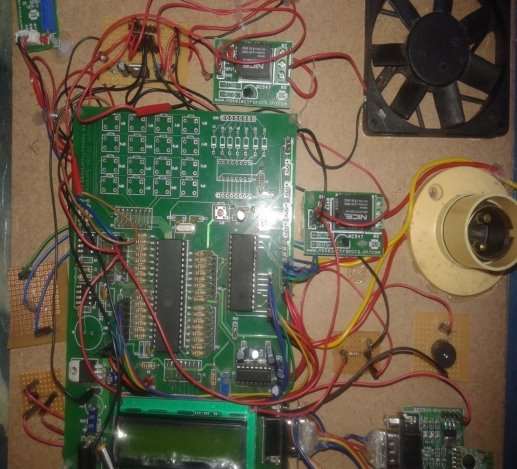 That is connected to different sensors like light, temperature etc. And also to ZigBee and hence this board represents the home and the devices that can be controlled and monitored using the cloud. 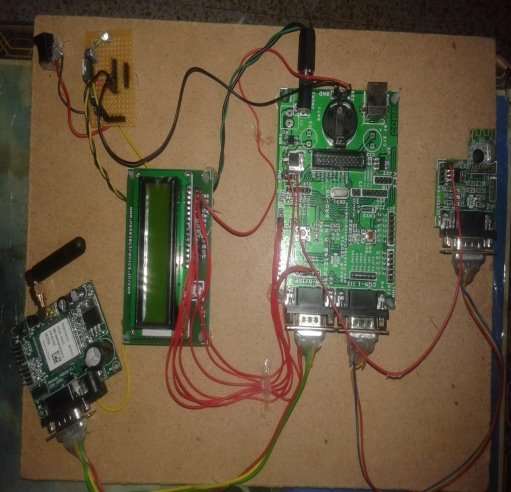 [9] “Z-Phone: Implementation Design and of Embedded Voice over ZigBee Applications” by A.Meliones and E. Touloupis.