Abstract – To hide the communication of users, the anonymity systems pack the application data into equal – sized cells. The size of IP packets in the Tor network can be very dynamic and the IP layer may be repack cells. A new cell-counting attack against Tor allows the attacker to confirm anonymous communication relationship among users very quickly. By varying the number of cells in the target traffic at the malicious exit onion router, the attacker can embed a secrete signal into variation of cell counter of the target traffic and it will be carried and arrive at the malicious entry onion router. Then an accomplice of the attacker will detect the signal based on received cells and confirm the communication among the users. There are several features of this attack. First, it is highly efficient and confirms very short communication session with only tens of cells. Second, this attack is effective and detection rate approaches 100% with a very low false positive rate. Third, it is possible to implement the attack in a way that appears to be very difficult for honest participants to detect.

To degrade the anonymity service provided by anonymous communication systems, traffic analysis attacks have been used. The Existing traffic analysis attacks can be categorized into two types: passive traffic analysis and active watermarking techniques. The active watermarking technique has recently received much attention to improve the accuracy of attack. In this technique is to actively introduce special signals into the sender’s outbound traffic with the intention of recognizing the embedded signal at the receiver’s inbound traffic.

The core contribution of the paper is a new cell counting based attack against Tor network. This attack confirms anonymous communication relationship among users accurately and quickly and it is difficult to detect.

The main features of cell-counting based attack are: (1) This attack is highly efficient and can quickly confirm very short anonymous communication sessions with tens of cells. (2) It is effective and detection rate approaches 100 % with very low false positive rate. (3) It makes difficult for others to detect the presence of the embedded signal. The Time – hopping based signal embedding technique makes the attack even harder to detect.

The Onion router (OR) maintains the TLS connection to other OR. Onion proxy (OP) uses source routing and chooses several ORs from cached directory. OP establishes circuit across the Tor network and negotiates a symmetric key with each OR, one hop at a time, as well as handle TCP stream from client application. The OR on other side of circuit connects to the requested destination and relay the data.

The OP will sets up TLS connection with OR1 using protocol, through this connection , OP sends CELL_CREATE cell and uses Diffie-Hellman (DH) handshake protocol to negotiate a base key k1=gxy with OR1. Form this key; a forward symmetric key kf1 and backward key kb1 are produced. This way first hop circuit C1 is created. Similarly OP extends the circuit to second and third hop. After circuit is setup, OP sends a RELAY_COMMAND_BEGIN cell to the exit onion router and cell is encrypted as {{{Begin 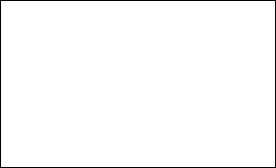 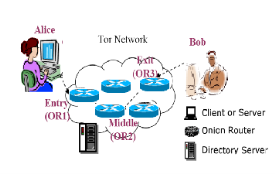 The TCP data is received by OR from port A and it is processed by TCP and TLS protocols. Then the processed data is delivered to the TLS buffer. The read event is called to read and process the data pending in the TLS buffer. This read event will pull the data from TLS buffer into the input buffer. Then the read event process cells from input buffer one by one. Each OR has routing table which maintains map from source connection and circuit ID to destination connection and circuit ID. 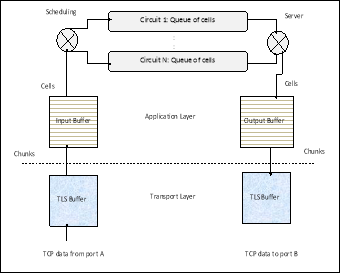 The IP packets in Tor network is very dynamic and based on this the cell – counting based attack implemented.

Step 1: SELECTING THE TARGET :- The attacker log the information at the exit OR, including the server host IP address and port for a circuit and circuit ID and uses CELL – RELAY-DATA to transmit the data stream.

Step 4: RECOGNIZING THE EMBEDDED SIGNAL :- The attacker enters the phase of recognizing the embedded signal with the recorded cells. For this used the recovery mechanisms. Once the original signal is identified the attacker can link the communication between Alice and Bob.

There are two critical issues related to attack: (1) Encoding signals at exit OR: Two cells are not enough to encode “1” bit. Because if the attacker uses two cells to encode bit “1” then it will be easily distorted over network and also hard to recover. When the two cells arrive at the input buffer at the middle OR, the first cell will be pulled into circuit queue and then if the output buffer is empty, the first cell will be flushed into it. Then the second cell will be pulled to the circuit queue. Since the output buffer is not empty, the second cell stays in the circuit queue. When the write event is called, the first cell will be delivered to the network, while the second cell written to the output buffer and wait for the next write event. Consequently, two originally combined cells will be split into two separate cells at the middle router. So the attacker at the entry OR will observe two separate cells arriving at the circuit queue. This cells will be decoded as two “0” bits, leading the attacker to a wrong detection of the signal. To deal with this issue the attacker should choose at least three cells for carrying bit “1”.

For transmitting cells, proper delay interval should be selected: If the delay interval among the cells is too large, users are not able to tolerate the slow traffic and to transmit the data will choose another circuit. When this condition happens the attack will fail. And if the delay interval is too small, then it will increase the chance that cells may combined at middle OR.

In this paper, we presented a cell-counting based attack against Tor network. This can confirm the anonymous communication among the user quickly and accurately and it is very difficult to detect. The attacker at the exit OR manipulates the transmission of cells from the target TCP stream and embeds a secret signal into the cell counter variation of the TCP stream. Then the attacker at the entry OR recognizes the embedded signal using developed recovery algorithms and links the communication relationship among the users. In this attack the detection rate is monotonously increasing function with the delay interval and decreasing function of the variance of one way transmission delay along a circuit. This attack could drastically and quickly degrade the anonymity service that Tor provides. Due to the fundamental design of the Tor network, defending against this attack remains a very challenging task that we will investigate in future work.