Idea Proposed for the Cactus Stack Approach with Dijkstra’s Algorithm

Abstract— This paper illustrates a possible approach to reduce the complexity and calculation burden that is normally encountered in the Shortest Path Problems. We intend to give a new concept based on the look ahead values of the input nodes given in the shortest path problem as proposed by the famous Djktras Algorithm. A new data structure called as Cactus Stack could be used for the same and we could try to minimize and the loop back issues and traversals in a given graph by looking at the adjacency matrix as well as the creation of a cactus stack which is linked in a listed manner. The calculation of the node values and the total value shall be the same as proposed by the ancient algorithm however by our concept we are trying to reduce the complexity of calculation to a larger extent.

With the advancement in technology, there is increase in demand for development of industries to fulfill the requirements of the people. But in industries there are a lot of chemicals and lubricants used for equipment some of these chemicals and lubricants are volatile in nature and may cause accidents such as fire. However, fire extinguishers and other preventive measures are also available at the security, but they are not proven executive and we have to flee the area as soon as possible.

This research paper proposes a new algorithm which calculates the shortest path forget away of such problems. The proposed algorithm is based on the original Dijkstra algorithm. This algorithm gives us optimum solution in less time and also reduces the calculation.[1]

We now give the details of Dijkstra’s algorithm. It begins by labeling a with 0 and the other vertices with ∞. We use the notation L0(a) = 0 and L0(v)=∞for these labels before any iterations have taken place (the subscript 0 stands for the “0th” iteration). These labels are the lengths of shortest paths from a to the vertices, where the paths contain only the vertex a.(Because no path from a to a vertex different from a exists, ∞is the length of a shortest path

other labels are∞, and S is the empty set}

forall vertices v not in S

labels of vertices not in S}

Although Dijkstra’s algorithm is an effective algorithm but still there are a lot of circumspections. Some of these are discussed below.

First we use look ahead dijkstra :

In the vfs we search in vertical order of cactus stack

In mathematics and computer science, an adjacency matrix is a means of representing which vertices (or nodes) of graph are adjacent to which other vertices.[3][4]

Adjacency matrix of above graph is 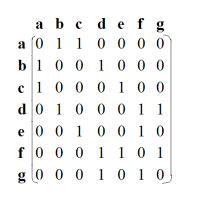 The matrix which represents graph with respect to its weight. Now we have to convert matrix into another matrix by using the following program. 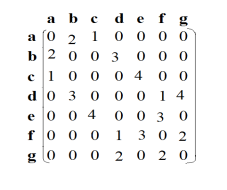 Now we take an above example and use this steps to convert into another adjacency matrix: 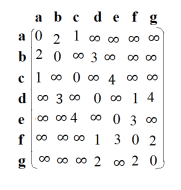 For solving adjacency matrix, we take the 1st node and observe the row of that node if there is weight on any vertex that means that vertex is connected to 1st node with respective weight.

If user’s last node is not the last node of matrix then we simply traverse the matrix till the node entered by user then we will back traverse rest of node that is we will start traversing last node.

A cactus stack is a set of stacks organized in a systematic format as a tree in which each path from the root to any leaf constitutes a stack.

A Cactus Stack act both like a Tree and a Stack. Like a stack, items can only be added to or removed from only one end that is top of the cactus stack; like a Tree, nodes in the Cactus Stack may have parent child relationships. Cactus Stacks are traversed from the child nodes to the parent nodes rather than vice-versa, as in a Binary Search Tree. One of the strongest benefits of a cactus stack is that it allows parallel data structures to exist with the same root.

A. Creation of Cactus Stack

Let us understand this matrix with the help of an example showed above. Series of steps should be as following: 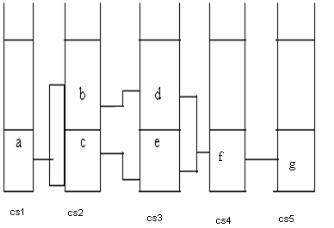 B. Linkage in Cactus Stack

After plotting the vertices in cactus stacks. If there is connection between element of cs1, cs2 then we have to join them. Similarly we will join elements of each stack to its consecutive stack.

List and number all bibliographical references in 9-point Times, single-spaced, at the end of your paper. When referenced in the text, enclose the citation number in square brackets, for example: [1]. Where appropriate, include the name(s) of editors of referenced books. The template will number citations consecutively within brackets [1]. The sentence punctuation follows the bracket [2]. Refer simply to the reference number, as in “[3]”—do not use “Ref. [3]” or “reference [3]”. Do not use reference citations as nouns of a sentence (e.g., not: “as the writer explains in [1]”).

Unless there are six authors or more give all authors’ names and do not use “et al.”. Papers that have not been published, even if they have been submitted for publication, should be cited as “unpublished” [4]. Papers that have been accepted for publication should be cited as “in press” [5]. Capitalize only the first word in a paper title, except for proper nouns and element symbols.

For papers published in translation journals, please give the English citation first, followed by the original foreign-language citation [6].