With the evolution of information technology, enormous expanses of data have become increasingly obtainable at outstanding volumes. Amount of data being gathered today is so much that, 90% of the data in the world nowadays has been created in the last two years [1]. The Internet impart a resource for compiling extensive amounts of data, Such data have many sources including large business enterprises, social networking, social media, telecommunications, scientific activities, data from traditional sources like forms, surveys and government organizations, and research institutions [2].

A big data might be petabytes (1,024 terabytes) or exabytes (1,024 petabytes) of data composed of billions to trillions of records of millions of people—all from different sources (e.g. Web, sales, customer center for communication, social media. The data is loosely structured and most of the data are not in a complete manner and not easily accessible[5]. The challenges include capturing of data, analysis for the requirement, searching the data, sharing, storage of data and privacy violations.

The trend to larger data sets is due to the additional information derivable from analysis of a single large set of data which are related to one another, as matched to distinguish smaller sets with the same total density of data, expressing correlations to be found to “identify business routines”[10].Scientists regularly find constraints because of large data sets in areas, including meteorology, genomics. The limitations also affect Internet search, financial transactions and information related business trends. Data sets develop in size in fraction because they are increasingly accumulated by ubiquitous information-sensing devices relating mobility. The challenge for large enterprises is determining who should own big data initiatives that straddle the entire organization.

MapReduce is useful in a wide range of applications,such as distributed pattern-based searching technique, sorting in a distributed system, web link-graph reversal, Singular Value Decomposition, web access log stats, index construction in an inverted manner, document clustering , machine learning, and machine translation in statistics. Moreover, the MapReduce model has been adapted to several computing environments. Google’s index of the World Wide Web is regenerated using MapReduce. Early stages of ad hoc programs that updates the index and various analyses can be executedis replaced by MapReduce. Google has moved on to technologies such as Percolator, Flume and MillWheel that provides the operation of streaming and updates instead of batch processing, to allow integrating “live” search results without rebuilding the complete index. Stable input data and output results of MapReduce are stored in a distributed file system. The ephemeral data is stored on local disk and retrieved by the reducers remotely.

In 2001,Big data defined by industry analyst Doug Laney (currently with Gartner) as the three Vs : namevolume, velocity and variety [11]. Big data can be characterized by well-known 3Vs: the extreme density of data, the various types of data and the swiftness at which the data must be processed.

Minimization of execution time in data processing of MapReduce jobs has been described by Abhishek Verma, Ludmila Cherkasova, Roy H. Campbell [6]. This is to buldge their MapReduce clusters utilization to reduce their cost and to optimize the Mapreduce jobs execution on the Cluster. Subset of production workloads developed by unstructured information that consists of MapReduce jobs without dependency and the order in which these jobs are performed can have good impact on their inclusive completion time and the cluster resource utilization is recognized. Application of the classic Johnson algorithm that was meant for developing an optimal two-stage job schedule for identifying the shortest path in directed weighted graph has been allowed. Performance of the constructed schedule via unquantifiable set of simulations over a various workloads and cluster-size dependent.

L. Popa, M. Budiu, Y. Yu, and M. Isard [7]: Based on append-only, partitioned datasets, many large-scale (cloud) computations will operate. In these circumstances, two incremental computation frameworks to reuse prior work in these can be shown: (1) reusing similar computations already performed on data partitions, and (2) computing just on the newly appended data and merging the new and previous results. Advantage: Similar Computation is used and partial results can be cached and reused.

P. Scheuermann, G. Weikum, and P. Zabback [9] I_O parallelism can be exploited in two ways by Parallel disk systems namely inter-request and intra-request parallelism. There are some main issues in performance tuning of such systems.They are: striping and load balancing. Load balancing is performed by allocation and dynamic redistributions of the data when access patterns change. Our system uses simple but heuristics that incur only little overhead.

D. Peng and F. Dabek [12] an index of the web is considered as documents can be crawled. It needs a continuous transformation of a large repository of existing documents when new documents arrive.Due to these tasks, databases do not meet the the requirements of storage or throughput of these tasks: Huge amount of data(in petabytes) can be stored by Google’s indexing system and processes billions of millions updates per day on wide number of machines. Small updates cannot be processed individually by MapReduce and other batch-processing systems because of their dependency on generating large batches for efficiency. By replacing a batch-based indexing system with an indexing system based on incremental processing using Percolator, we process the similar number of data documents averagely per day, happens during the reduction of the average age of documents in Google search which is resulted by 50%.

Utilization of the big data application in Hadoop clouds is described by Weiyi Shang, Zhen Ming Jiang, Hadi Hemmati, Bram Adams, Ahmed E. Hassan, Patrick Martin[13]. To analyze huge parallel processing frameworks, Big Data Analytics Applications is used. These applications build up them using a little model of data in a pseudo-cloud environment. Afterwards, they arrange the applications in a largescale cloud situation with notably more processing organize and larger input data. Runtime analysis and debugging of such applications in the deployment stage cannot be easily addressed by usual monitoring and debugging approaches. This approach drastically reduces the verification effort when verifying the deployment of BDA Apps in the cloud.

Matei Zaharia, Mosharaf Chowdhury, Michael J. Franklin, Scott Shenker, Ion Stoica [14] MapReduce and its variants have been highly successful in implementing large-scale data-intensive applications on clusters of commodity base. These systems are built around an model which is acyclic in data flow which is very less suitable for other applications. This paper focuses on one such class of applications: those that reuse a working set of data across multiple operations which is parallel. This encompasses many machine learning algorithms which are iterative. A framework cnamed Spark which ropes these applications and retains the scalability and tolerantes fault of MapReduce has been proposed. To achieve these goals, Spark introduces an abstraction called resilient distributed datasets (RDDs).

An RDD is a read-only collection of objects which are partitioned across a set of machines. It can be rebuilt if a partition is lost. Spark is able to outperform Hadoop in iterative machine learning jobs and can be used to interactively query around and above 35 GB dataset with sub-second response time. This paper presents an approach cluster computing framework named Spark, which supports working sets while providing similar scalability and fault tolerance properties to MapReduce

An Objective of proposed System is to the underutilization of CPU processes, the growing importance of MapReduce performance and to establish an efficient data analysis framework for handling the large data Drift in the workloads from enterprise through the exploration of data handling mechanism like parallel database such as Hadoop. 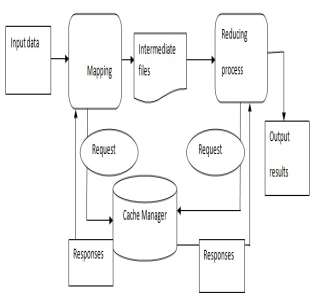 III.A.Provision of Dataset To Map Phase :

Cache refers to the intermediate data that is produced by worker nodes/processes during the execution of a Map Reduce task. A piece of cached data is stored in a Distributed File System (DFS). The content of a cache item is described by the original data and the operations applied. A cache item is explained by a 2-tuple: Origin, Operation. The name of a file is denoted by Origin in the DFS. Linear list of available operations performed on the Origin file is denoted by Operaion. Example, consider in the word count application, each mapper node or process emits a list of word, counting tuples that record the count of each word in the file that the mapper processes. Cache manager stores this list to a file. This file becomes a cache item. Here, item refers to white-space-separated character strings. Note that the new line character is also considered as one of the whitespaces, so item precisely captures the word in a text file and item count directly corresponds to the word count operation performed on the data file. The input data are get selected by the user in the cloud. The input files are splitted. And then that is given as the input to the map phase. The input to the map phase are very important. These input are processed by the map phase.