The national limits for toxic metals in herbal medicines and product

In general, quantitative tests and limit tests accurately determinate the concentrations of toxic metals in the form of impurities and contaminants. The latter are unavoidably present in the samples being tested. Member states can elect to use either quantitative tests or limit tests and their choices will be influenced by the nature of the sample and the contaminants or residues, assessed on a case-by-case basis. Another factor would be that the methods identified, and chosen to be applied to control toxic metals, should be relevant and should meet the requirements at a regional and national level. Some examples of proposed national limits for arsenic and toxic metals in various types of herbal products are shown in Table 1[5].

Table 1. Example of national limits for arsenic and toxic metals in herbal medicines and products 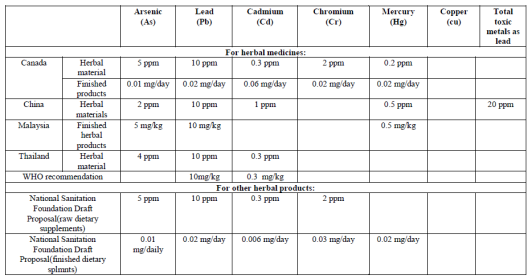 The sources of toxic metals in traditional Chinese medicine samples

The toxic metals in traditional Chinese medicines can be from the soil where is contaminated, in the processes of collection and production.

Atomic emission spectroscopy (AES) is a method of chemical analysis, when the analyte atoms in solution are aspirated into the excitation region(flame, plasma, arc, or spark at a particular wavelength) and underwent desolvated, vaporized, atomized, these high-temperature sources provide sufficient energy to promote the atoms into high energy levels, after decaying back to lower energy levels by emitting light, the wavelength of the atomic spectral lines gives the identity of the element and the intensity of light proportional to the concentration of atoms, this can be used to determinate the quantity of elements in a sample. Since all atoms are excited simultaneously, they can be detected simultaneously.

The classification of AES

Flame atomic emission spectroscopy(FAES) The energy source is flame, a sample is brought into the flame by a nebulizer in the form of gas, sprayed solution. A flame provides a high-temperature source for desolvating and vaporizing a sample to obtain free atoms for spectroscopic analysis. For atomic emission spectroscopy the flame must also excites the atom to higher excited states. Then subsequently emit light when they returning to the ground electronic state. Each element emits light at a characteristic wavelength, which is dispersed by a grating or prism(monochromator) and detected by photo detector. Due to its low temperature(1700~3200°C), nitrous oxide-acetylene is the best flame as this gives the highest temperature. FAES used mostly for determination of alkali metals and occasionally calcium, and need internal standard to correct for variations flame[6]. So FAES is always used with FAAS together to determinate the content of metals in a sample. Slavica RaÅ¾iÄ‡ used FAAS/FAES to determinate the elements of Cu, Zn, Mn, Fe, K, Ca, Mg in some of herbal drugs[7].

ICP-AES has a lot of advantages such as low inter-element interference, multi-element capability, high sensitivity, high concentration range, low chemical interference, with stable and reproducible signal and high degree of selectivity, precision and accuracy(0.3~3%), can use with gas, liquid or solids samples. Disadvantages are serious spectral interferences(too many emission lines), procedures complicated, consume large Ar gas and operating expense, not possible to determinate the elements of H, N, O, C or Ar in trace levels as they are used in solvents and plasma, and also not possible to determinate F, Cl and noble gases at trace levels as they require high excitation energy.

Determination of toxic metals in traditional Chinese medicine by ICP-AES

With the development of separation science, sample preparation methods have also been substantially developed, especially the sample preparation method for complex material systems, which has gained more attention in recent years. The specific method requires special preparation methods or combination methods according to the specific nature and status of the sample preparation. The traditional Chinese medicines samples are very complicated[12], the preparation method usually includes conventional extraction methods such as steam distillation, water extraction, and alcohol precipitation, alcohol precipitation of water, organic solvent extraction, fractionation, absorption. For the determination of toxic metals in traditional Chinese medicine samples, people have made a lot of work in improving the equipment, good analysis methods to improve the experimental measurements. But always overlook one more important factor, sampling. So how to improve the accuracy of sampling is also one of the most important topics to be studied.

Digestion is an important process in the determination of toxic metals in traditional Chinese medicines. The general methods of digestion including ashing, wet digestion, microwave digestion, combustion method and high pressure dissolving. But all of these methods have their limitations: (1) can’t be guaranteed fully adapted to all organic samples; (2) the waste of analyte; (3) perchloric acid is flammable and explosible. Li Yang compared the digestion methods of dry ashing, wet digestion and microwave digestion in the process of determination of elements in periostracum serpentis and periostracum cicadae[13]. The results showed the microwave digestion with the highest efficiency.

Ashing digestion is digest samples at high temperature, this is used to find the total mineral content of a sample. Kuziemska Beata used ashing digestion method to determinate the contents of toxic metallic elements in red clover biomass[14].

In the process of wet digestion, normally use the solvent of acid or oxidant to digest the samples. The commonly used acid and oxidant are as follows:

The capacity of these acid and oxidant are different. In the practical applications, normally use the mixture of two or more inorganic acids with different proportion(HNO3-H2SO4, HNO3-HCIO4, H2SO4-HNO3-HCIO4). It has proven that the optimal digestion reagents are the mixture of HNO3-HCIO4, could digest multiple components simultaneously. Tong Wen-jie used HNO3-HCIO4 to digest sunflower(Helianthus annuus L) and analyzed the mineral elements content[17]. Cai Yanrong also used HNO3-HCIO4 as digestion reagents in the study of trace elements(Fe, Cu, Zn, Al, K, Na, Ba, Sb, Pb, As) in hair samples[18].