Aim: The experiment was to synthesise benzocaine via reflux with a condenser and was characterised by examining at the infra-red spectrum and chemical shifts of NMR.

Introduction: Benzocaine belongs to a collection of medication identified as local anaesthetics and generally consumed as a topical pain reliever. Its mechanism of action is to prevent nerve conduction when applied locally in appropriate concentration to nerve tissues. The main benefit of local anaesthetics is that it does not cause unconsciousness to the patient and its action could be reversible. The use of local anaesthetics presents complete tissue recovery with no permanent damage.

The intention of the experiment was to synthesise benzocaine, an ester, from 4-aminobenzoic acid, a carboxylic acid, by Fischer Esterification. The mechanism in figure 1 was to combined 4-aminobenzoic acid and ethanol in a reflux reaction with the addition of sulphuric acid as a catalyst to produce the product. 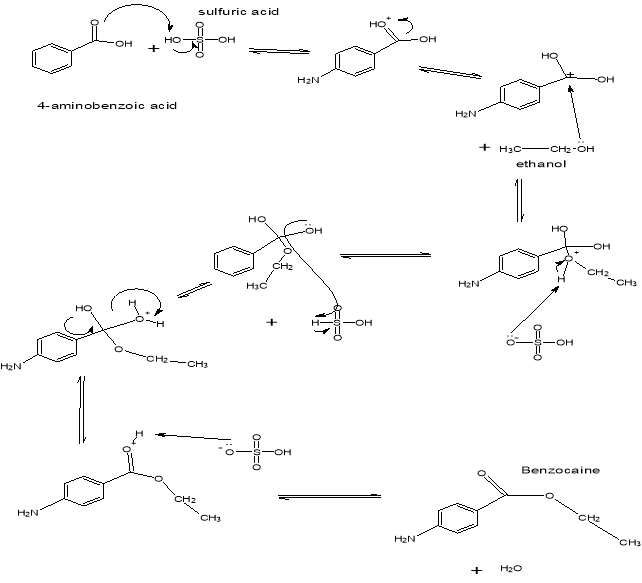 Method: In week one of the experiment, 4-aminobenzoic acid (3.0g), methylated spirits (20cm3) and concentrated sulphuric acid (3.0ml) was added to a dry round bottom flask (100cm3). A condenser was then placed onto the flask. Next, the mixture was placed on a heating mantle and the reflux reaction was carried out for thirty minutes. Afterwards, the reaction mixture was cooled down to room temperature and the condenser was removed. The mixture was gently stirred with a glass rod while sodium hydroxide solution 20 % (20cm3) was added slowly until the mixture has reached neutral using strips of pH paper. Subsequently, pour the contents into a beaker containing 70cm3 of ice and rinse the flask with fresh distilled water into the beaker until the capacity is 150cm3. A Buchner funnel was then used in vacuum filtration to isolate the product. Lastly the product was transferred to a watch glass and dried in the oven for 15 minutes. In week two the experiment was repeated, conversely, isopropyl alcohol was used instead of methylated spirits.

excess water are trapped in the product causing extra hydrogen bonding in the molecule, hence higher energy was needed to break the bonds. Melting point accuracy depicts purity of the product therefore the shorter the range of melting point implies a productive synthesis.

In H-NMR, 4-aminobenzoic acid and benzocaine was identified. By looking at 4-aminobenzoic acid, there were 5 distinct peaks representing 5 distinct proton atmospheres available in the molecule. However the structure of benzocaine, the H-NMR identifies 6 distinct peaks representing 6 distinct proton atmospheres. By observing the peaks in the both molecules, similar singlet peaks were found. The singlet peak for 4-aminobenzoic acid was 5.7747ppm and benzocaine was 4.0609ppm.Both singlet groups were considered amine groups since the 2 hydrogen connected to the nitrogen (pink) creates the same environment therefore only 1 peak was found.

There is a distinct peak appeared in 4-aminobenzoic acid spectrum, showing a chemical shift of 12 ppm which is considered to be part of the hydrogen of the –COOH (light blue).

In 13Carbon-NMR, the 4-aminobenzoic acid spectrum has 5 peaks representing 5 distinct carbon atmospheres and benzocaine has 7 peaks representing 7 distinct carbon atmospheres. The peaks are at about 165ppm-168ppm for both molecules represents the occurrence of the carbonyl group (C=O). Furthermore, the solvents were seen on both spectrums. One of 4-aminobenzoic acid’s peaks was at 40.1326ppm which represents DMSO, and benzocaine’s peak was at 77.1052 which represent Chloroform.

The Infrared spectroscopy is useful for analysing the occurrence of different functional groups of the chemical structures such as benzocaine and isopropyl 4-aminobenzoate. By analysing both products, absorption peaks at about 3361cm-1-3457cm-1 on the spectrum were seen at both products. It was considered that the occurrence of the amine group (N-H) was located at the region. Furthermore looking at the structures of both products, the amine group was connected to carbon with the peaks at about 1308.72cm-1-1365.61cm-1 of the spectrum, which represents a C-N bond found in aromatic amine groups. Additionally, looking at the absorption peaks at about 1441.17cm-1-1441.98cm-1 between the two products, it is considered as the aromatic ring (benzene).

Moving through the benzene ring, the spectrum shows the occurrence of the carbonyl group (C=O) that is part of ester group in both products. The absorption peaks measured was about 2824.37cm-1-2983.54cm-1. The carbonyl group of two products were also connected with a C-O bond which is part of the ester group. The peaks measured were 1167.10cm-1-1168.85cm-1 in both products.

This experiment was considered failure in terms of the weight of the products. It is time-dependent to obtain more accurate yields and handling techniques. Although the melting points were not varied critically, the first product (benzocaine) was not able to achieve a pure product due to high melting point. Although this experiment was considered failure, we still achieved to synthesize 4-aminobenzoic acid to benzocaine and its derivative (isopropyl 4-aminobenzoic acid).

Why do you think the pH of 8 cannot be exceeded in this experiment?

In the experiment, the reactants carboxylic acid (4-aminobenzoic acid) and ethanol were used to synthesize esters (benzocaine, isopropyl 4-aminobenzoic acid) and water molecules as leaving group. The Fischer Esterification reaction mainly functions at pH less than 8. However, increasing the alkalinity atmosphere in this experiment implies the occurrence of additional –OH (hydroxide ions) in the reaction. The additional hydroxide ions could cause the reaction to reverse, making the reactants to be more favourable and fewer products will be form. As mentioned, Fischer Esterification usually functions at pH less than 8. However, increasing the alkalinity environment would cause the reaction saponification to dominate since the reaction is reversed.

How do you expect the Rf value if you have been asked to the synthesize the butyl and pentyl derivatives?