Synthesis and characterisation of Benzocaine.

The Fischer esterification of 4-amino benzoic acid is catalysed by an acid is fully reversible. 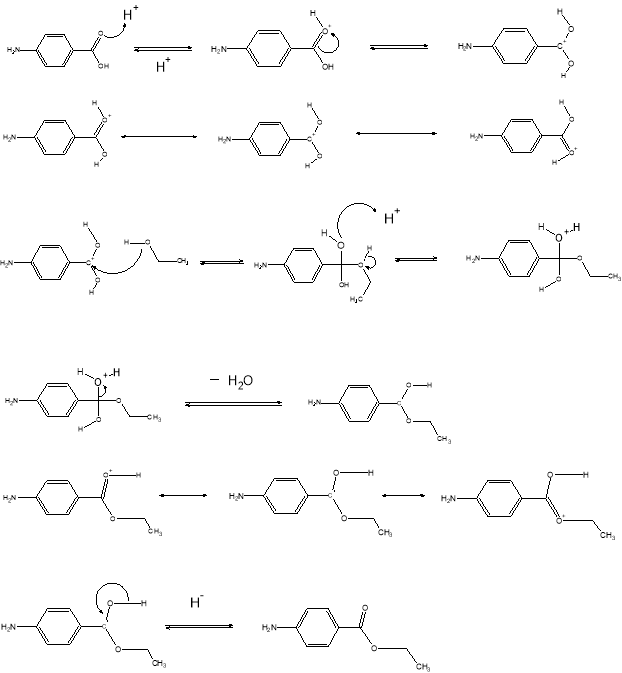 The melting points for both products were average reading from three attempts and are reasonably within the literature range. This can be attributed to accurate measurements, clean utensils (thus avoiding impurities) and sufficient drying.

At roughly 66% and 71% the percentage yields for products one and two respectively are reasonably low. This may be due to a number of problems such as, incomplete transfer of reactant into the reaction vessel, not transferring all of the reaction vessel washings for filtering, incorrect filtering technique where some product was allowed to pass through instead of being retained e.g. filtering too fast or incomplete transfer of the product from the filter paper after filtration.

With reference to the HNMR tables, I have deduced corresponding H atom based on integration, splitting and chemical shift. The chemical shift of an atom depends on the extent of shielding it has, for example a H atom attached to an Oxygen (e.g. H atom number 6 on 4-amino benzoic acid) has less shielding due to the Oxygen atoms’ electronegativity whereas a H atom attached to a C atom has more shielding as carbon is not electronegative and in the case of H atoms number 2 and 3, they are also surrounded by other atoms which give them some shielding. I found locating H atoms 2 and 3 particularly tricky as their quintet splitting pattern and integration of 3 where very misleading however their chemical shift reaffirmed their identity as it is relatively to the left thus indicating a fair amount of shielding.

With reference to the 13CNMR tables I was able to deduce the corresponding Carbon atoms based on two properties, chemical shift and peak height. The chemical shift (in accordance to the level of shielding/position of the C atoms) allowed me to locate peaks for carbonyl carbons (Carbon number 7 in both reactant and product) and more shielded carbon aand the height/integration of the peaks which corresponds to the number hydrogen atoms attached to the C atom in question.

With reference to the DEPT-135 tables I was able to distinguish the difference between the C atoms in accordance with the different number of H attached to each C atom. This technique portrays CH and CH3 atoms as positively phased and CH2 atoms negatively phased. For atoms with the same phasing, I used the chemical shift ( as with 13 CNMR ) to distinguish between the C atoms in question.

Rf values can be used to deduce the polarity of a molecule, where a low Rf value can indicate a polar molecule. This is based on how the molecule interacts with the mobile and stationary phases. For example; a low Rf value is a result of the molecule interacting with the polar stationary phase/silica and not travelling very far up the plate allowing us to deduce that its polar. Based on this theory and the fact that polarity increases with RMM; a larger molecule would be more polar and thus have a lower Rf. I would therefore predict that Isopropyl 4-Aminobenzoate would have a lower Rf value than Benzocaine due to its larger RMM making it more polar than Benzocaine.