Part 1: A Review of the Structure and Function of the M6P/IGF2R and its Role in Trafficking M6P Labelled Proteins and Wider Set of Enzymes to the Lysosome.

1.1 The Structure of the Mannose-6-Phosphate Receptors 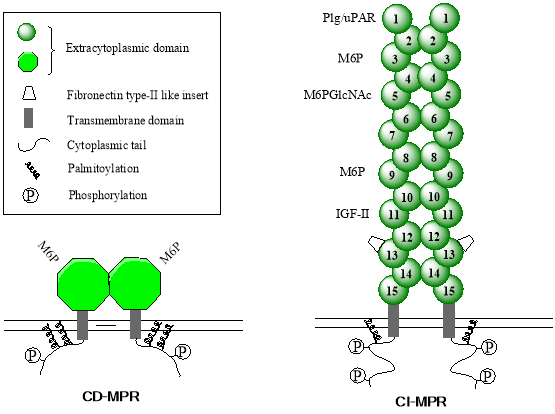 1.2 The Itinerary of the MPR Trafficking 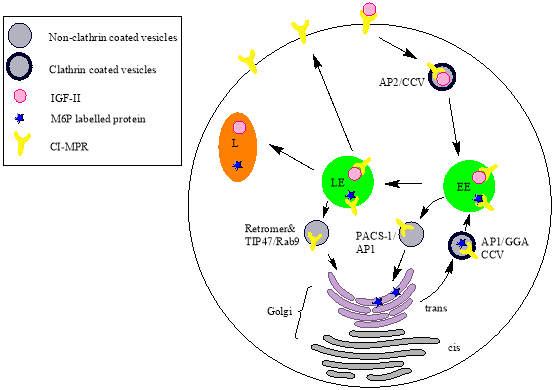 Figure 2: A schematic diagram of the subcellular localization and trafficking itinerary of the MPRs. Acid hydrolases are transported via Golgi apparatus and endosomes to lysosomes. Insulin-like growth factor â…¡ (IGF-) is internalized by binding with CI-MPR and subsequently delivered to lysosomes. EE, early endosome; LE, late endosome; L, lysosome.

Lysosomes are cellular organelles which are responsible for digesting waste materials and cellular debris using acid hydolases. Acid hydrolases are synthesized in the endoplasmic reticulum, specifically delivered via the trans-Golgi network (TGN) to endosomes and subsequently transported to lysosomes.

The majority of soluble acid hydrolases are modified with M6P residues in the cis-Golgi network and transported to the TGN. The M6P labelled hydrolyses are recognized by the M6P receptors (MPRs) in the TGN. MPRs form complexes with adaptor-protein 1 (AP1) and exit the TGN in clathrin-coated vesicles (CCVs), which was shown by pulse-chase labeling experiment.[1],[2] At least 4 binding sites for AP1 on the cytosolic tails of the CI-MPR were reported.[3],[4] In addition, AP1 binds to MPRs through an acidic-cluster-dileucine (AC-LL) motif.

It was discovered in 2001 that three types of the Golgi localized, ï§-ear-containing, ADP-ribosylation factor-binding proteins (GGAs)-GGA1, GGA2 and GGA3 bind to the AC-LL motif through their VHS domains and play a crucial role in sorting MPRs.[5],[6] GGAs and AP1 are suggested to work parallel by generating different MPR-containing vesicular carriers. Alternatively, the GGAs are thought to facilitate the intake of the MPRs into AP1 CCVs, which can be explained by the structure of the Golgi. The TGN is consisted of the last three stacked cisternae (C5, C6 and C7). Clathrin-coated buds are formed exclusively on C7 stack whereas C5 and C6 produce non-clathrin-coated buds. GGAs equally present on clathrin-coated and non-coated membranes. In order to prevent receptor-hydrolase complexes entering non-coated carriers, which are destined for the plasma membrane, GGAs trap the MPRs on the smooth cisternae and allow them to reach the trans phase of the Golgi and associate with AP1 in CCVs. In turn, phosphorylation of AC-LL motif by AP1 result in the binding in the VHS domain of GGA1/GGA3, thus induce the dissociation of the bound MPRs and leads to transformation to AP1. The GGAs then return to the cytoplasm.

By using fluorescently labelled MPR, it showed the TGN-derived tubules and their tubule-vesicles can function as carriers and could fuse with endosome and release the complexes.[7]

After budding of the CCVs, the clathrin is released but the AP1 remains for a period of time. Most of the MPR-containing vesicles are transported to early endosomes, followed by the releasing of hydrolases during the endosomal maturation, in which the pH drops to about 6.[8] At acidic milieu in lysosomes, hydrolases are activated and start to digest waste material.

There are two routes to retrieve MPRs.

1) Recycling to the Golgi

AP1 and phosphophurin acid cluster sorting protein (PACS-1) are involved in MPRs recycling from early endosomes.[9] Loss of either AP1 or PACS-1 results in accumulation of MPRs in endosomes provides evidence of their function in MPRs trafficking. The mechanism is analogous to the corporation between GGAs and AP1. The PACS-1 transports the MPRs to the adaptor for incorporation into CCVs at the TGN.

MPRs are also recycled from late endosomes. Considering the distribution, it is suggested that retromer is involved in the early part and TIP47-Rab9 is involved in the late part of the pathway. Retromer is a complex of proteins which is situated on the membrane tubules that extend from endosomes. It retrograde transports MPRs to the TGN. TIP47 binds the cytoplasmic tail of the CI-MPR and Rab9-GTP to form Rab9-positive transport vesicles, bud from late endosomes and fuse with TGN.[10]

2) Recycling to the cell surface

Some MPRs are retrieved to the cell surface either from endosomes or from TGN as a result of mis-sorting from C5 and C6 cisternae.

1.3 The Cytoplasmic tail of the CI-MPR

Figure 3: A schematic diagram of the cytosolic tails of CI-MPR, with the identified amino-acid sorting signals and their associated transport proteins. There are 164 residues from N terminus to C terminus. The casein kinase 2 (CK-2) sites and palmitolation sites are marked at specific residues.

Presently, there is only one palmitolation site found on the tail of CI-MPR, unlike the CD-MPR which has two palmitoylation sites.

N-acetylglucosamine-1-phosphodiester ï¡-N-acetyl-glucosaminidase, also called the uncovering enzyme (UCE). It excises the terminal GlcNAc from the GlcNAc-P-Man diester, forming the M6P monoester marker on lysosomal proteins. UCE is synthesized as an inactive precursor until activated by proteolysis, which only occurs in the TGN by the endoprotease furin.[12]

2.2 Structure and Function of Domain 5