“The Silk Road,” a trading route that can be traced back to over 3600 years ago, but still is a household recognized name. Standing the test of time proves that this product was extremely important in shaping history. According to Chinese historians, silk began with the prince of China, Hoang-ti, and his wife, Si-ling-chi. The prince wanted his wife to contribute something important to their people. He assigned her the task of finding a use for the thread that came from silk worms. Si-ling-chi was able to develop a method to feed the worms, extract and reel the thread, as well as create clothing from the silk. The Chinese were able to keep not only the method of producing silk but also the source (the silk worm) a secret until about the sixth century. The nobility of the world was forced to pay as much as its weight in gold for silk until about 555 A.D. This is when two Nestorian monks were able to bring a few silk worm eggs to Constantinople, which began the spread of production through Europe and other parts of Asia.6

Silk can come from many different insects, including caterpillars, spiders, and worms. The most economically viable silk is produced from mulberry silkworms because they can be raised in captivity and their silk can be mass produced. The larva is born from an egg and must be fed mulberry leaves for up to one month before it is ready to create a cocoon of silk. Once it creates this cocoon, workers kill the larva inside using hot water or steam, and then proceed with the rest of the manufacturing process.5

The third most frequent amino acid present, tyrosine, is a little larger and more complex because it contains a benzene ring. Its chemical structure is shown in Figure 3.2 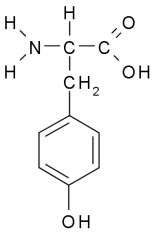 The similarities in the chemical structure of these amino acids should be noted. As a generalization, all amino acids can be represented with an amino group, a hydrogen atom, a carboxylic acid group, and a side “R” group all attached to the alpha carbon as shown in Figure 4.2

The method of synthesis that is used is step growth condensation polymerization. To perform this reaction, a hydrogen atom from the amino group of one amino acid reacts with the hydroxide molecule from the carboxylic acid group of another amino acid to form water. This allows for the nitrogen atom to bond directly to the carbon atom and start a chain. One step in the polymerization process between glycine and alanine is shown in Figure 5.1

As the name suggests, “The Silk Road” was a route taken in order to trade silk between communities, however, silk was not the only product being transported on this route. Silk is arguably known as the most significant product being transported at the time, but because of the existence of the Silk Road, it made it much easier to trade other commodities, such as gold, precious metals and stones, ivory, exotic animals, and religion. The route provided a means for Buddhist missions to travel from India to influence China. The starting point of the Silk Road and capital of China was Changan. During the heyday of the Silk Road, about 740 A.D., Changan grew into one of the largest cities of the time with a population of about two million people. As the Silk Road developed and the precious items became more widely known, it in turn became more dangerous to travel. Bandits took advantage of the long, desert road by attacking and looting caravans. To combat this, sections of the Great Wall of China were constructed to defend the caravans.9 The simple pleasures that silk provided like comfort and social hierarchy caused a chain reaction that in turn led to the globalization of trade, religion, economy, and mass construction. Today, silk has taken on a new importance to society with the many technologically advanced uses that will be discussed later.

Both the advantages and disadvantages of silk can mainly be contributed to the inherent biological nature of its formation. The advantages of silk come from comparing it with other natural threads and with artificially created threads. The mulberry silk worm produces large amounts of silk in a convenient cocoon shape that is easily industrialized unlike other natural threads. The natural process of protein organization with such chemical control has not been able to be replicated artificially in a laboratory. The first disadvantages of silk are bound by the limitations of nature. The only insect that is currently capable of mass producing silk is the mulberry silkworm. Other insects that produce silk such as spiders are carnivorous and independent in nature, and cannot produce mass quantities silk. Therefore, creating a farm of spiders that can produce enough silk becomes very difficult. The mulberry silkworm only creates one type of thread whereas a spider can produce typically five types of thread that have different and desired properties.4 A few other disadvantages include photo-yellowing, wrinkling recovery, and rub-resistance. Photo-yellowing is a phenomenon where the silk turns a yellowish tint after prolonged exposure to light. Silk cloth has poor wrinkling recovery meaning after it is creased; it is difficult to get it smooth again. The rub-resistance or abrasion-resistance of silk cloth is also poor, which is the ability to resist surface wear from flat rubbing on another material.5

The obvious example of a use for silk is cloth which also takes up the greatest portion of silk consumption. There are many other uses of silk specifically in the medical field that have arisen recently due to advances in technology. The fibers of silk have been used for sutures of wounds, because it does not trigger a response from the human immune system. For the same reason, it has been used as replacement ligaments, tendons, bones, and cartilage.3 After further research and development, a potential use is an artificial cornea made from a silk film that is lasered to become permeable. Another potential use currently under research is very thin, degradable silk films with electrode arrays printed on them. These films could form to the contours of the brain and potentially treat epilepsy and other conditions with less scarring than traditional procedures. New innovative uses for silk are surfacing and being researched regularly.4

Silk is a rapidly renewable resource that is both reusable and biodegradable. It has much less negative impact when compared to other fabrics if it is produced safely and organically. There is not much processing involved in the creation of silk that normally would cause unnecessary environmental impact. The mulberry plantations provide prevention to soil erosion from wind and water, as well as improving air quality by naturally filtering the air. Some silk has been advertised as being a “green” product when produced with the appropriate caution, but it also has negative environmental impacts associated with its production. 7 In non-organic production, pesticides and fertilizers are used in the growth of the mulberry trees that pollute the air when sprayed and the ground water when washed away by precipitation. Chemicals are used in the “degumming” process that are eventually wash off creating wastewater that in certain cases may or may not be reclaimed at a water treatment plant. In most areas silk is produced where populations are large and land is sparse, such as China, Japan, Italy, and India. The mulberry plantations take up a significant amount of land. 8 These are some of the few locations that have been able to successfully grow mulberry plantations; subsequently a great deal of transportation is required to deliver the silk to its consumers leading to pollution. As with any industrialized production, there are always environmental impacts both positive and negative that arise.7