When one looks at a person moving, what comes to your mind that is fundamental in giving the person energy to breathe, move and function? It is carbohydrates. Carbohydrates are known as saccharides and molecular compounds made from three elements: carbon, hydrogen and oxygen. Carbohydrates are the most abundant macromolecules on earth and they can be accessed easily in our daily intake of food and diet. According to Campbell (2006), the simplest carbohydrates are known as monosaccharides (from the Greek word monos-, single and sacchar), which means single sugars. When two single sugars or two monosaccharides are joined together by the process of condensation, they are known as disaccharides. When two or more single sugars are joined together, they form more complex sugars known as polysaccharides. As these sugars and polysaccharides also known as carbohydrates, which are fundamental in providing energy to human, plants, animals and cells, they give us the opportunity to look at some interesting facts on the structure and function of carbohydrates.

Firstly, monosaccharides are made up of the structure (CH2O)n1 where n=3, 5 or 6. They are known as Trioses (C3H6O3), Pentoses (C5H10O5) and Hexoses (C6H12O6). An example of it is glucose, which is known as a hexose sugar or six-carbon sugar with the formula of C6H12O6. The other two hexoses, galactose, which is found in milk, and fructose, a plant sugar, both play an important role in mammalian and plant biology respectively. Though the three hexoses have the same formula, their atoms attached to each other is slightly different and they are also known as isomers (Williams, 1999). These sugar isomers’ structures in Figure 1(a) are called straight chain structures. However, when they dissolve in water, they rarely exist as straight-chain structure, they will form ring structures. 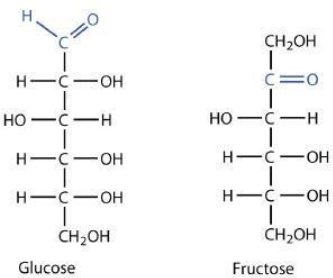 Figure 1(a) Two isometric hexoses. Each of these six-carbon sugars has the same molecular formula C6H12O6, hence each is an isomer of the other.

This is because all monosaccharides contain a carbonyl group (C=O) and a number of hydroxyl (-OH) groups. For the hydroxyl groups (-OH) which have the ability to form hydrogen bonds with water molecules, which make these sugars soluble in water. (Grant, 2006) The fact that glucose is readily soluble is important for its absorption during digestion, transport in the blood to cells for respiration, and metabolism by cells.

Thus, as most monosaccharides are soluble in water, they form rings in aqueous solutions, as shown for glucose in Figure 1(b). To form the glucose ring, carbon 1 bonds to the oxygen attached to carbon 5. (Campbell. 2006) As shown in the middle diagram, the ring of glucose and other sugars may not always show the carbon atoms at the corners of the ring. The bonds in the ring are drawn to indicate the atoms and functional groups, such as -OH, extending above and below it. 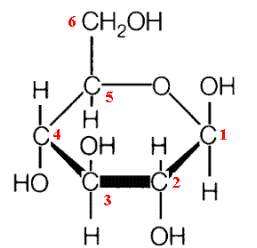 On the other hand, the carbonyl group, depending on its location, makes the sugar either an aldose (an aldehyde sugar) or a ketose (a ketone sugar). Glucose is an aldose, also known as reducing sugar and fructose is a ketose (non-reducing sugar).

Monosaccharides, especially glucose, are the main fuel molecules for cells to work. “Cells use the carbon skeletons of monosaccharides as raw material for manufacturing other kinds of organic molecules, such as amino acids.” (Campbell, 2006)

However, when cells that do not use the monosaccharides immediately, they are usually incorporated into disaccharides and polysaccharides. Two monosaccharides linked together into a double sugar to form a disaccharide. The reaction is known as condensation where a molecule of water is removed as shown in the equation below. (Grant, 2006)

Chemical reaction for condensation process where a molecule of water is removed when two monosaccharides are linked together.

One of the major sugars in milk is lactose, and sucrose is found in most plants such as sugarcane and beet. Sucrose is extracted to use as table sugar. Both lactose and sucrose are disaccharides and contain a molecule of glucose bonded to a different monosaccharide. The bond formed between them is called glycosidic bond. What happens during the condensation process is when one monomer gives up a hydroxyl group and the other gives up a hydrogen atom from a hydroxyl group. As a result, H2O forms, an oxygen atom is left, linking the two monomers through a glycosidic bond as shown in Figure 2(a) between glucose and fructose to form sucrose. Maltose, another disaccharide, is formed from two glucose monomers. It is commonly used in making beer and malted milk candy (Denise R. Ferrier. and Richard A Harvey., 2014). 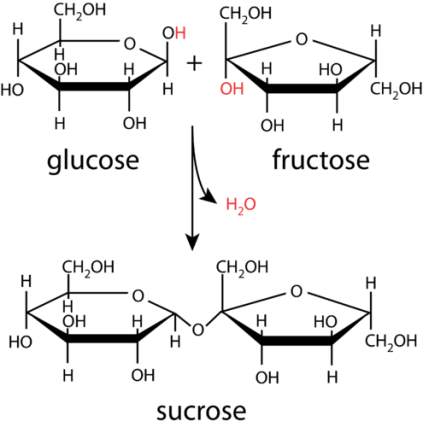 Furthermore, disaccharides cannot cross the intestinal wall and enter the bloodstream. For absorption to occur, they have to be hydrolysed to their monosaccharides’ monomers, which are then transported across the gut epithelial cells to enter the blood for distribution to all cells. (Grant 2006, p. 14) Lactose, which is a key sugar in mammalian milk is a disaccharide is made up of monosaccharides glucose and galactose. The enzyme lactase is only produced in mammals and most mammals’ secretion will stop when the young have been weaned. This is interesting because humans in many cultures, will continue to consume milk throughout adult life. Most of the people in these milk-drinking societies will continue to produce lactase long after childhood and be able to digest milk with ease. However, in cultures where milk consumption is discontinued, that is when lactase production will stop and people can develop lactose intolerance symptoms such as diarrhoea because the lactose in milk is not hydrolysed and it cannot be absorbed in the gastrointestinal tract.

Sucrose is digested easily to produce the monosaccharides that are used to provide energy for the body. Sugar is metabolised in the human bodies to produce to produce glucose, which can be used for immediate energy or if not metabolised, it can be stored by the conversion to a polysaccharide called glycogen. According to Ennis (2005, p. 16), the design of our bodies only allows us to store about a day’s worth of energy in the form of glycogen. If we eat more sugar than we can use or store as glycogen, the excess sugar is converted to fat. Therefore, it is not advisable to eat too much food that is high in sugar as it can result in obesity.

(1-4) glycosidic bonds (Denise R. Ferrier. and Richard A Harvey., 2014). The numbers refer to the positions in the sugar where the links are formed (refer to Figure 3a). The (1-4) bonds produce straight chains of glucose units. The branches in glycogen are formed by (1-6) glycosidic bonds. Most of the glycogen in animals is stored in the skeletal muscles and the liver. According to Grant (2006, p.14), it is as much as 10% of the weight of the liver that can be glycogen. The glycogen is an important store of glucose that is used to maintain blood sugar concentrations between meals and during night time. Most of the organ and tissues in the body, including the brain, will depend on the liver’s glycogen. When it comes to exercises and heavy activities, skeletal muscle stores energy as glycogen too. Its synthesis from glucose is carried out by the enzyme glycogen synthase. The function of glycogen is to supply glucose on demand to skeletal muscle as well.

For plants, the energy storage for them via polymers of glucose is starch, and there are two forms to it. Amylose is a linear chain of glucose units all in (1-4) bonds. Amylopectin is a branched form of starch, it is similar to glycogen but it has fewer branches, and only one (1-6) bond per 30 (1-6) bond (Grant, 2006). When it comes the human diets, over half of the carbohydrates is actually made up of starch from the plants. Starch is a valuable source of energy in our diet and is contained in large quantities in staple foods such as potato, bread, rice and pasta. If one spends a long time chewing a piece of bread, it will start to taste sweet. This happens because an enzyme in saliva, known as amylase, begins to break down the starch in the bread, releasing some of the glucose units. In addition, starch also has been used as a polymer to replace plastics in packaging (Ennis, 2005). Starch has the advantages of being biodegradable and as a renewable resource.

For cellulose, another major polysaccharide of plants, is also a polymer of glucose. However, unlike starch, it cannot be digested by humans. It provides structural support for plant cell walls. Like amylose, cellulose is an unbranched but linear chain of glucose units made up of (1-4) glycosidic bonds. This allows cellulose to form long, straight chains. These long, straight chain cellulose polymers form fibrils of cellulose, which have high strength, providing the structural scaffold that supports plant cell walls (see Figure 3b).

On the other hand, as the nutritional value of plants and fruits is recognised as mammals do not have cellulases except for herbivores such as cows, sheep and horses, thus cannot digest cellulose fibres. Hence, that makes cellulose a main component of dietary fibre, which forms an important part of a balanced diet.

Besides being a source of dietary fibre for humans and plant structure for cell walls, cellulose is also a key raw material of cotton, linen and paper (Grant, 2006). The chemical treatments of cellulose had allowed it to become part of the production of fabrics such as rayon. There had been much exploration to find sustainable energy sources and carbohydrate polymers had been seen as major components of biofuels, as a renewable and carbon-rich source of energy by Grant (2006).

In conclusion, carbohydrates are extremely important macromolecules, from its interesting and meticulous structures to major functions by storing the energy of plants captured from sunlight and providing animals with nutrition. The vital structural roles played by carbohydrates in biology have also shown that they are not only an important energy source for plants and animals, but they have been also a sustainable source for the future industries of energy sources.