The lower atmosphere (Troposphere) includes 75% by mass of the atmosphere (concentrated). Natural sources of Ozone in the troposphere includes lightning. Approximately 10% of all atmospheric ozone is present in the troposphere. If ozone levels reach 20ppm, they are very poisonous to humans, animals and plants. It oxidises organic tissue which disrupts the normal biochemical reactions in the body, irritates the eyes and causes breathing difficulties. It can be detrimental to plants and agriculture, as it oxidises much more readily then oxygen, killing/spoiling the agriculture and destroying it.

Sources of ozone in the troposphere include diffusion from the stratosphere, internal combustion engines, petrochemical smog, naturally from lightning and photochemically when nitrogen dioxide in polluted air is decomposed by sunlight.

Positive effects of ozone include that it can kill bacteria and viruses in water and thus is useful in purifying water supplies.

B) Effects of Ozone in the Stratosphere

Formation of Ozone in the Stratosphere

Decomposition of Ozone in the Stratosphere

Due to the absorption of UV radiation, the Ozone layer acts as a radiation shield by absorbing medium and high energy UV rays. This protects living organisms as UV radiation can have very harmful effects on them including:

Thus without the ozone shield in the stratosphere, life in the biosphere would be dramatically impaired and destroyed by harmful UV rays.

CFC’s – Chlorofluorocarbons are haloalkanes in which the hydrogen atoms have been replaced by fluorine or chlorine atoms.

Haloalkanes are the products when alkanes react with halogens (members of group 7 of the periodic table). CFC’s generally contain “chloro” and “flouro” functional groups and no hydrogen atoms.

The general structure of compounds classified as CFCs are haloalkanes whose hydrogens have been replaced by chlorine or fluorine atoms.

B) Main Uses of CFC’s

CFC’s were used as refrigerants and as propellants in aerosol spray cans. They have a variety of uses as demonstrated below.

However due to the harmful effects of CFC to the environment and the ozone shield, CFCs are not used for these uses anymore.

C) Reactions between CFC’s and Ozone that Result in the Destruction of Ozone in the Stratosphere. Effects of Small Concentrations of CFC’s that can Damage Large amounts of Ozone

Reactions between CFCs and Ozone

Synthetic CFCs are responsible for the destruction of the ozone shield, natural CFCs such as CH3Cl and HCl rarely reach the stratosphere as they readily oxidise in the troposphere. However, synthetic CFCs slowly diffuse from the troposphere into the stratosphere, where they undergo photodissociation (due to UV rays) to produce chlorine and bromine radicals that attack and destroy ozone molecules.

1. In the stratosphere, the CFC comes into contact with short wavelength UV

2. The chlorine free radical then reacts with the ozone molecule

3. The ClO molecule reacts with free oxygen atoms which exist naturally from UV breakdown of O2

This reaction causes destruction of ozone in the stratosphere, due to the (previously used) synthetic CFCs for refrigeration, dry cleaning etc. 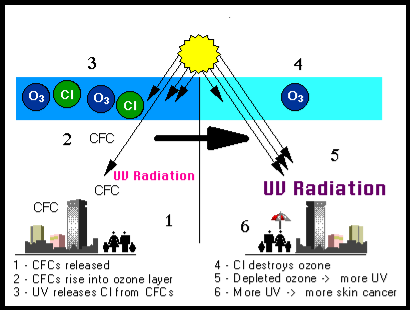 Small Amounts of CFCs can still do harm:

Evidence has shown that even small amounts of CFCs can damage large amounts of ozone. Firstly, CFCs generally have a long lifespan, ranging from approximately 57 (CFC-11) years to 333 years (CFC-12), and due to the fact that each Chlorine radical can be responsible for the breakdown of tens of thousands of ozone molecules, and due to their lifespan once released, even a small amount, will be around for many decades to come.

In addition, most CFCs will almost definitely make their way up to the stratosphere as they cannot be destroyed at low altitudes as they are unreactive and they are insoluble in water and therefore cannot be washed out of the atmosphere by rain. 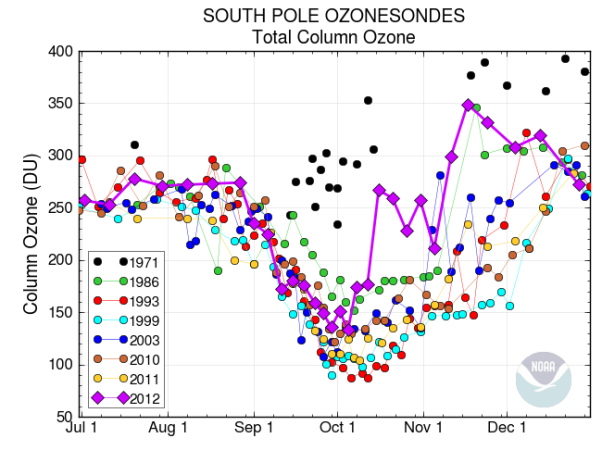 There are a variety of trends that can be interpreted from the above diagram.

The main aims of the original agreement is as follow:

The Montreal Protocol (and amendments) has been effective as by 2006, the consumption of ozone depleting substances has been reduced globally by 96%. However, due to the long lives of the previously used ozone depleting substances, the total concentration will take hundreds of years to be completely down. However, the total concentration in the troposphere has generally been declining since the mid-1990s.