Nuclear Energy is energy stored inside an atom that holds together the nucleus. Atoms make up everything in the universe and are held together with a large force. In a process called fission, atoms split apart which releases energy: a neutron collides with a uranium atom and it splits, which releases a large amount of energy in the form of heat and radiation.

Sterile Insect Technique (SIT) is among the most environment-friendly insect pest control methods ever developed. It was made in the USA by an American entomologist named Dr Edward F. Knipling.

SIT consists of sterilizing doses of Ionizations radiation injected into insects. Ionization is the conversion of an atom or molecule into an ion by adding or removing charged particles such as electrons or other ions. Although some insects are important for maintaining agriculture by pollinating crops, soil formation and nutrient cycling, some insects can carry infectious diseases which can contaminate crops. The SIT technique is used to stop the spread of contamination and many more things that could affect the production of crops. SIT works by mass-rearing and sterilization using radiation to target pests. The sterilized males are then released into infested areas. Females that mate with the sterilized males do not produce children, this results in the population of the insect pest being drastically reduced.

The SIT has been successful in controlling a number of insect pests such as the fruit fly, tsetse fly, screwworm, moths and mosquitoes. The first successful SIT was made on the screw-worm fly. The screw-worm fly is a troublesome pest that lives in the wounds of warm-bodied animals. These pests were extracted from their habitat and kept in a lab which then were sterilized by radiation and released on the Caribbean island of Curacao. This pest virtually disappeared from this island. Another example of the use of the SIT technique was the Queensland fruit fly which destroys $300 million of fruit and vegetable crops once a year.

According to https://www.futurelearn.com/info/courses/vector-borne-diseases/0/steps/108240 Mister Ryan who works for the university of Queensland said the SIT program was a ‘game-changer’ for management of the Australian state fruit fly across Australia. He said that the technique wouldn't solely guarantee South Australia’s remains fruit fly-free however would additionally facilitate cut back populations across the country.

Benefits of using SIT includes improved plants, animals and human health, increased crop and animal production in agricultural systems, accelerated economic development, protects the horticultural and industries through prevention of pest introductions, protecting and creating jobs and overall reduction of pesticides. SIT is a very effective way to eliminate problem insects. However there are many issues with SIT, that are keeping it from use. Problems and risks associated with SIT include possible breakdown of the translocation stocks due to crossing-over, contamination of the strain by wild-type individuals and partial sterility of the strain due to the translocation. Another reason is that simply there are no fast, effective, or cheap ways to sort through the pests in a big number. Another risk could include the amount of radiation used to sterilize the insects is too damaging and could kill them.

The insects are exposed to ionizing radiation which is the current choice of method. Isotopic sources like cobalt-60 and cesium-137 are used to manufacture gamma radiation for sterilizing insects. X-rays and high energy electrons are the other way in which insects get exposed to radiation. An important factor when scientists radiate insects is the amount of it absorbed by the insects. This is extremely important and must be controlled closely in order for the insects to not be able to reproduce but still strong enough to continue surviving. Insects range from the amount of radiation absorbed by each one. The range is from 5 Gy to beyond 300Gy. Each insect species has its own Gy value that it needs inorder for it to be sterilized, this is a difficult factor such as the age or the oxygen levels of the insect when determining how much radiation each insect species absorbs.

In many countries where the technology has been used, retrospective economic assessment studies have shown a high return on investment. SIT helps society by protecting agriculture like fruit and vegetables so that consumers can be assured that they are eating safe and clean produce. Sterile Insect Technique is the insect control technique of the future. It is an eco-friendly method to reduce problem pests in areas. SIT is able to expand further and overtake conventional pesticides and insecticides if the technique is able to expand and compass key problem species and insects. In a world demanding for cleaner foods and environments the SIT will thrive. 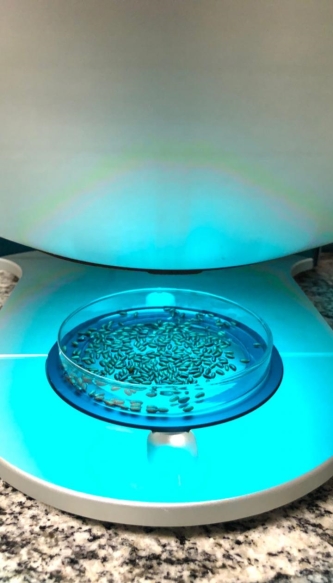