The purpose of this experiment is to use liquid-liquid extraction, a form of solvent extraction, to separate a mixture of an organic acid (benzoic acid), organic base (ethyl-4-aminobenzoate), and a neutral component (9-Fluorenone). The technique relies on the solubilities of the compounds with immiscible liquids because they are “unlike” substances which resulted in their separation into layers that were extracted. The percent recoveries of the acid, base, and neutral component extractions are 951.1%, 607.8%, and 104.4%, respectively. It can be concluded that the compounds were separated, and therefore the hypothesis is accepted, but there was water in the product due to ineffective equipment.

The scientific goal of the experiment is to separate a mixture of organic acids, bases and a neutral component by liquid-liquid extraction. The substances being used are benzoic acid, ethyl-4-aminobenzoate, and 9-Fluorenone. 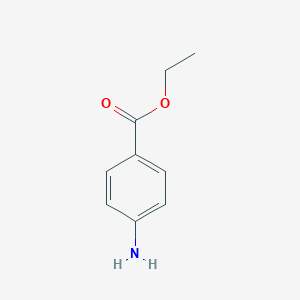 Solid-liquid extraction involves a solute being combined with a solvent in which the solute can dissolve. By mixing, the analyte separates into a liquid phase which is separated from the solid by filtration.

HCl acid is added to the basic component to protonate it in order for it to become ionic. This will cause it to dissolve in water which will allow it to be separated from the neutral and acidic components that are soluble in the organic solvent.

Figure 4: The mechanism of the reaction of 3M HCl withEthyl-4-aminobenzoate

Figure 5: The mechanism of the reaction of 3M NaOH with benzoic acid

After protonation and deprotonation, the originally basic and acidic components are turned back into acids and bases by the addition of NaOH and HCl, respectively, in order to recover them in the products because they cannot be isolated in their ionic form. The non-ionized form is used to get the precipitate as the products which are expected to be the individual components of the original mixture.

Please refer to p. 147-150 in Microscale Organic Laboratory with Multistep

and Multiscale Syntheses (Wiley, 2015). Modifications include the exclusion of

determining the melting point of the compounds. Also, a boiling stone was not used

while heating the neutral component on the sand bath.

Table1: The initial and final masses of the compounds

Based on the results in Table 1, the percent recoveries of the acid, base, and neutral component extractions are 951.1%, 607.8%, and 104.4%, respectively.The experiment produced percent recoveries greater than 100% for all three components. This can be attributed to the poor Hirsch funnel filtration system that was not adequately removing the water from the crystals of the basic and acidic components, which is why these two components have a much larger percent recovery than the neutral component which was heated. Therefore, the percent recoveries for benzoic acid and Ethyl-4-aminobenzoate indicate the presence of water. The percent recovery for 9-Fluorenone was the least because it did not involve filtration using a Hirsch funnel, but rather it was heated to remove the ether solution from the substance. Despite this, the percent recovery was still above 100% due to remaining ether that had not evaporated. Therefore, the results do not make sense because there appears to be more product than there was starting material indicating that the products contained water and ether solution that had not been completely removed. Melting point was not determined and therefore, the purity of the products was not evaluated, but it can be visually determined that the yellow color of 9-Fluorenone was not seen in either the basic or acidic products and consequently, the theory that this technique separates mixture agrees with the results.

In summary, the percent recoveries of the acid, base, and neutral component extractions are 951.1%, 607.8%, and 104.4%, respectively. The mixtures were successfully separated by liquid-liquid extraction though they contained water. Their separation was based on their solubilities in organic and aqueous solvents which can be applied to the separation of mixtures in the laboratory. To improve this experiment, a drying oven can be used to remove the water from the filter papers in order to determine how much of the product was actually recovered.