The objective of this experiment is to study the relative solubility of organic compounds in various solvents. Besides, understanding on the effect of polar groups on a nonpolar hydrocarbon skeleton is the aim for the test.

The purpose of this experiment is to explore and understand the solubility characteristics between organic compounds and their relative solvents. The structure of organic compound indicates its solubility, acidity, basicity, reactivity, stability and so on. All of these properties can be called as “function” and different structure has different functions after reacting with solvents. It is important to know the solubility of reactant because it directly determines the recrystallization and reaction yields. In recrystallization process, an impure compound is dissolved into a highly concentrated solution at a high temperature. The mixture was left to cool to open air to filter out the insoluble impurities. After the further cooling of solution, the remaining amount of solute can no longer be held in solution forms, it will be purified into crystals, which can later be collected. This process has used the concept of solubility. In short, insoluble of reactants in solvent indicates no reactions occur. In chemistry, there is a term in describing the solubility of polymer which is “like dissolves like”. The meaning is one substance is more likely to soluble in those solvents that are having similar properties. Polar compounds are generally soluble in other polar compounds; non-polar compounds are generally soluble in other non-polar compounds. Same goes to molecules that can form hydrogen bonds, they are generally soluble with other molecules that can form hydrogen bonds. To prevent unnecessary test, structure of reactants should be observed whether they are “like dissolves like” to predict the solubility before handing on the procedures.

Acid-base extraction is a type of liquid-liquid extraction. Its basic concept is based on different solubility levels between organic solvent and water. In this case, the organic solvent may be any carbon-based liquid that have less solubility in H2O. The common used organic solvents are ethyl acetate, dichloromethane, or ether. Acid-base extraction is usually used to differentiate organic compounds from each other based on their acid-base properties. The assumption leans against this method is that majority of the organic compounds are likely to dissolve in organic solvent than that in water. However, if the organic compound is rendered ionic, it is eventually having high solubility in water compared to organic solvent because rendered ionic has the ability to easily transform into ions. It can be ionized into cation by adding a proton or becomes an anion by removing a proton (an H+ ion). The fundamental theory behind this technique is that salts, which are ionic, tend to be water-soluble while neutral molecules tend not to be. If there is an addition of acid to a mixture of an organic base with organic solvent, the organic base will receive a proton to become cation while acid remains unchanged. Conversely, an addition of base into acid mixture together with organic solvent, acid will be deprotonated and transforms into anion meanwhile basicity remains the same. Both of these cation and anion will be dissolved in water and this aqueous layer can be eliminated after phase separation and the pure substance can be obtained.

Ultraviolet–visible spectroscopy defines an absorption spectroscopy in the ultraviolet-visible spectral region. Its working theory is using light in the adjacent and visible (near UV and near infrared) ranges. The chemical inside the electromagnetic spectrum region will absorb the light which affects the perceived color of chemicals. At that moment, the light energy will be used by molecules to perform electronic transition. By going through Ultraviolet–visible spectroscopy, the compositions of organic compound can be identified. Diagram1 shows the energy distribution of each orbital inside a chemical compound. 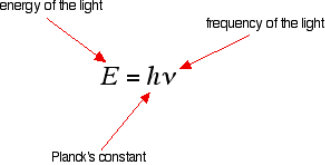 It shows the energy is directly proportional to frequency of light. Since UV spectroscopy is always giving the data of its wavelength instead of frequency. The relationship between frequency and wavelength needed to be considered. From next equation, it proves that the lower the wavelength gives higher frequency since they are inversely proportional:

If large amount of energy needed to promote electrons, lower wavelength of UV light will be absorbed. Absorption spectrometer is only working in a range from about 200 nm (in the near ultra-violet) to about 800 nm (in the very near infra-red). Due to this case, when the electron is promoted from an orbital having weak energy (For example, pi bonding orbital has lower energy compared to non-bonding orbital), more energy is needed to help in transferring the electron. The wavelength of light absorbed will be shorter than 200 nm. Now the detection of functional group in this situation is ambiguous because the absorption of light does not happen in range. Non-bonding orbital requires lone pair of electrons inside the organic compound which means it may be containing oxygen, nitrogen or a halogen. The wavelength like 180nm will be absorbed to promote electron from pi bonding orbital into pi anti-bonding orbital while 290nm of wavelength will be used for promoting electron from non-bonding orbital. 290nm of wavelength will be picked because the spectrometer works in the range of 200 – 800 nm. Organic compound with different functional groups have their unique electrons configuration. The energy and wavelength of UV light required is also distinct. However, these properties prove that each composition has its own particular reading of wavelength absorption. From this, the composition of one unknown compound could be identified by testing the Ultraviolet–visible spectroscopy. Here is some example of compounds with their wavelength absorption. 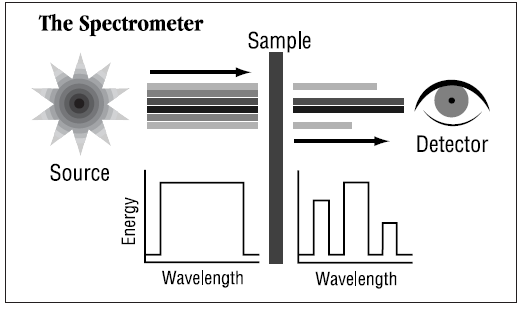 Detector will absorb the non-absorbed infra-red and produce a graph by its strength on different wavelengths. For example, if the sample absorbs 800cm-1 of infra-red, the remaining light that passing through the sample will be lesser. Hence the graph will show a large trough at 800cm-1 of wavelength because detector received less amount of infra-red. This is the typical Infra-red spectrum:

From the example above, the trough at 3000+ cm-1 indicates there is absorption of infra-red by sample to excite bonds in the molecule to a higher state of vibration – either stretching or bending. Observation on this trough can determine the functional group inside the organic sample because every functional group has their approximate range of infra-red absorption. The advantage of applying Infra-red spectrum is that it can detect the other smaller parts of differences between the molecules that having same functional group. For example, both propan-1-ol and propan-2-ol contain same OH group as functional group. These can be shown in two graphs below: 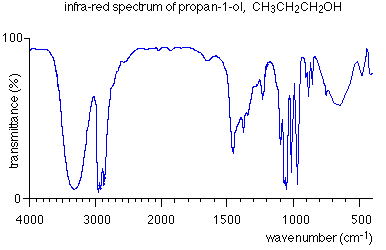 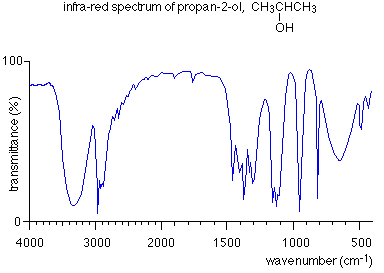 They have almost the same troughs around the area at 3000 cm-1 which indicates the same functional group. However, the regions between 1500 and 500 cm-1 shows the distinct in composition. This region is called fingerprint region. The pattern in the fingerprint region allows the user to evaluate the compound.