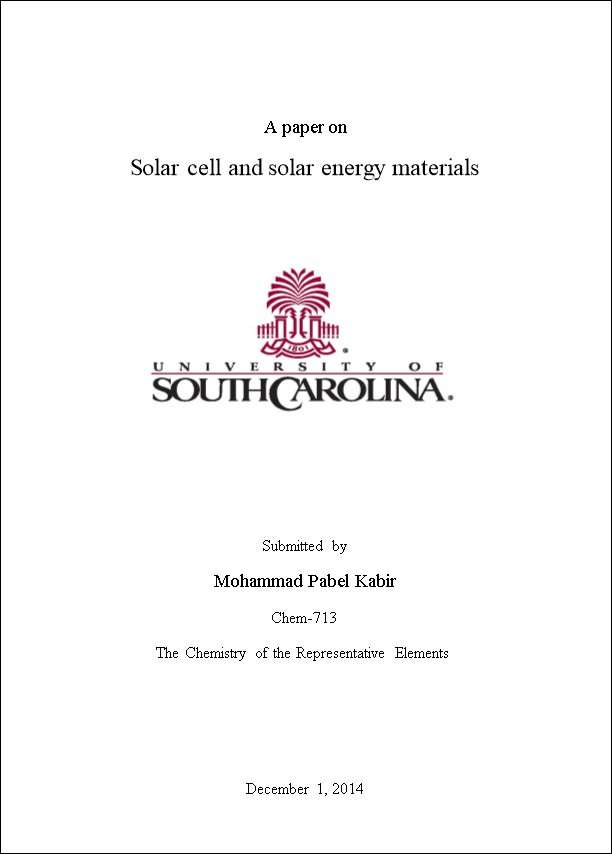 One of the biggest challenges to mankind is highly depended on the decreasing fusil fuels such as oil, coal, natural gas. Fusil fuels are nonrenewable energy resource which usually takes million of years to form. As a result, their reserves are depleted much faster than it forms. Furthermore, the combustion of these fuels causes environmental degradation through air pollution and global warming. Combustion of carbon-based fossil fuels creates not only air pollutants, for example, sulfur oxides, nitrogen odixe and heavy metals, but also carbon di-oxide, the notorious greenhouse gas widely considered to be the number one culprit of global climate change.[1] In order to protect our environment and provide energy security, energy generated from renewable sources has been extensively studied.[2] Though it will take some decades to come close to a truly sustainable energy system, the research is being conducted to find solutions to (1) increase efficiency in production, transmission, and utilization of the remaining fossil fuels, (2) reduce negative impacts to the environment, and (3) develop or improve technologies and infrastructure for the smooth transition to the alternative/ renewable energy sources (e.g., nuclear power, solar energy, wind power, geothermal energy, biomass and biofuels, and hydropower).[3] Among those, solar energy has many advantages such as availability and lower cost. The search and synthesis for low cost solar cell materials made of earth abundant elements has been a topic of extensive study across the globe.

In 1839,the photovoltaic effect was discovered by French physicist, Alexandre-Edmond Becquerel. He constructed the world’s first photovoltaic cell in his father’s laboratory at age nineteen, which was the beginning of solar energy materials technology. This experiment was done by illuminating two electrodes, which were coated by light sensitive semiconducting materials, with different types of light. He observed that electricity increases with the increase of light intensity. Then an English electrical engineer, Willoughby Smith, was discovered the photo conductivity of selenium in 1873. In 1883,Charles Fritts built the first true solar cells made from selenium wafer which is coated with a thin layer of gold. He found that the efficiency was only about 1%. In 1905, Albert Einstein published in a paper that light consists of “packets” or quanta of energy, which can be varied only with its frequency.[4] This theory was very simple, but revolutionary that explained the data of photoelectric effect. The photoelectric effect was experimentally proved by an American experimental physicist, Robert Andrews Millikan, who later won the Nobel Prize for the photoelectric effect and measurement of the charge of the electron. In 1954, a single-crystal cell of germanium and a cadmium sulphide p-n junction was developed with an efficiency of 6%. Later the University of Delaware found that the efficiency exceeds 10% with the first thin film solar cell which was made of copper sulfide and cadmium sulfide in 1980. In 2007,they achieved 42.8% efficiency in solar cell technology.[5] To date, the highest 44.8% efficiencies have been achieved by using multiple junction solar cells.

Solar cell is electrical device which converts solar radiation into electricity by photoelectric effect. It consists of two types of semiconducting materials, one is n-type and another is p-type. When these two types of materials placed with each other, it forms depletion layer at middle of these two materials. When sun light falls on the depletion layer the materials absorb photon and the electron from filled valence band excites to the unfilled conduction band, which creates a hole and electron pair. The hole goes to the p-type conductor and the electron goes to the n-type conductor. If we complete the circuit by connecting these two materials we will see there is flow of electricity. [6] 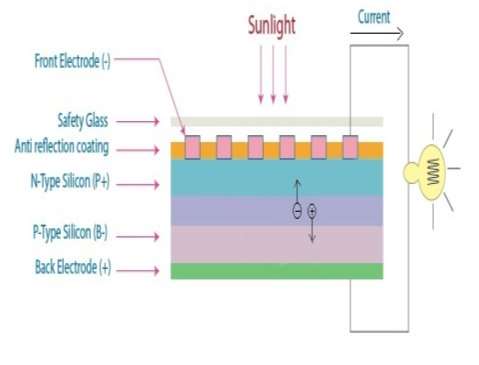 Solar cells can be classified into three categories according to generation:

The most prevalent bulk material for solar cells iscrystalline silicon(c-Si), also known as “solar grade silicon”. Bulk silicon is separated into two categories according to crystallinity and crystal size. 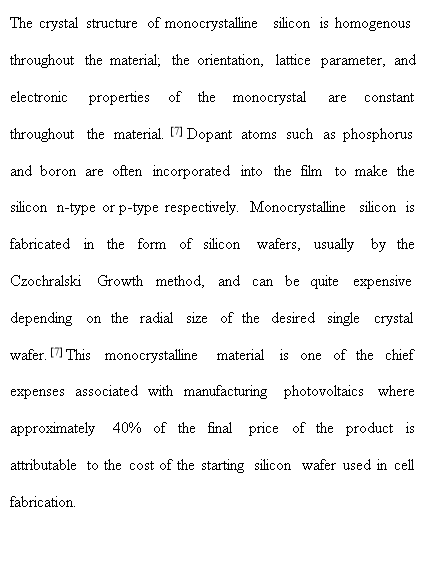 Cadmium telluride is the only thin film material so far to rival crystalline silicon in cost/watt. However cadmium is a highly toxic andtelluriumsupplies are limited. Thecadmiumpresent in the cells would be toxic if released. However, release is impossible during normal operation of the cells and is unlikely during fires in residential roofs.[9]A square meter of CdTe contains approximately the same amount of Cd as a single C cellnickel-cadmium battery, in a more stable and less soluble form.[9]

The name ‘perovskite solar cell’ is derived from the ABX3crystal structureof the absorber materials, which is referred to as perovskite structure. The most commonly studied perovskite absorber is methylammonium lead trihalide (CH3NH3PbX3, where X is ahalogenion such asI−,Br−,Cl−). Formamidinumlead trihalide (H2NCH3NH3PbX3) is a recently studied newer material which shows promise, with a bandgap between 2.23eV and 1.48eV. This minimum bandgap is closer to the optimal for asingle-junction cellthan methylammonium lead trihalide, so it should be capable of higher efficiencies. The efficiencies of perovskite solar cell have increased to 12.8% in 2014.[11] This increased efficiency is making them a very rapidly advancing technology and a hot topic in the solar cell field. Perovskite solar cells are also forecast to be extremely cheap to scale up, making them a very attractive option for commercialization.

Quantum dots are tiny particles or nanocrystals of a semiconducting material with diameters in the range of 2-10 nanometers. Due to high surface to volume ratios for these particles, quantum dots display unique electronic properties, intermediate between those of bulk semiconductors and discrete molecules. Due to their small size, the electrons in quantum dots are confined in a small space which is called quantum box. When the radii of the semiconductor nanocrystal is smaller than the exciton Bohr radius (exciton Bohr radius is the average distance between the electron in the conduction band and the hole it leaves behind in the valence band), there is quantization of the energy levels according to Pauli’s exclusion principle (Figure 1).[12][13]The discrete, quantized energy levels of quantum dots relate them more closely to atoms than bulk materials. Generally, as the size of the crystal decreases, the difference in energy between the highest valence band and the lowest conduction band increases. More energy or more energy light is then needed to excite an electron from valance band to conduction band. Therefore, the properties of semiconducting materials can be tuned by changing the size of the quantum dots. By using different sized quantum dots in multi-layer junction we can absorb wide range of light. 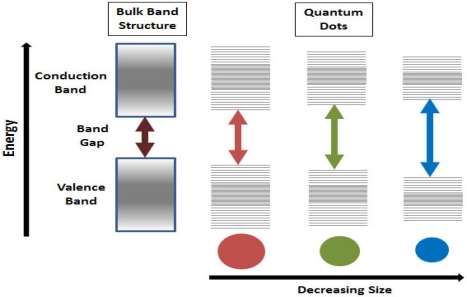 Figure 4: Splitting of energy levels in quantum dots due to the quantum confinement effect, semiconductor band gap increases with decrease in size of the nanocrystal.[12][13]