Motivation: Many important problems in cell biology require the dense nonlinear interactions between functional modules to be considered. The importance of computer simulation in understanding cellular processes is now widely accepted, and a variety of simulations algorithms useful for studying certain subsystems have been designed.

Human and animal needs vitamins and minerals to help in the growth of the body and prevent disease, obtained from food or supplements. For example, an important vitamin is riboflavin and Riboflavin is water-soluble vitamins also sources of riboflavin are milk, meat, fish, fruits and vegetables. Diets that do not contain riboflavin or poor riboflavin cause serious health problems. For example, a disorder of the digestive system, heart disease and blood vessels. Riboflavin deficiency may also cause cancer.

The name “riboflavin” comes from “ribose” (the sugar whose reduced form, ribitol, forms part of its structure) and “flavin”, the ring-moiety which imparts the yellow color to the oxidized molecule (from Latin flavus, “yellow”). The reduced form, which occurs in metabolism along with the oxidized form, is colorless.

Riboflavin has been used in several clinical and therapeutic situations. For over 30 years, riboflavin supplements have been used as part of the phototherapy treatment of neonatal jaundice. The light used to irradiate the infants breaks down not only bilirubin, the toxin causing the jaundice, but also the naturally occurring riboflavin within the infant’s blood, so extra supplementation is necessary.

Riboflavin is a yellow substance which was isolated in 1879. Riboflavin name comes from ribose sugar substance and also characterized by yeast an excellent dietary source. In addition, it contains two factors which are aide Flavin adenine dinucleotide (FAD) and a Flavin mononucleotide (FMN) (Daniel, 2012).

It has been pointed out by (Bretzel, et al.1999) and recently been produced commercially by riboflavin chemical manufacturing or by fermentation, where the production of riboflavin with a purity of at least 97-98% of foodstuffs and medicines. In addition, scientists biological prefer to biological and chemical manufacturing and much more than manufacturing because of the many advantages. For example, low material cost, low waste and energy requirements due to the use of renewable energy. It has been producing a large amount of riboflavin from many organisms’ example of the use of fungi, yeast and bacteria Bacillus Subtilis (Li Wu, Q, 2007). Research indicated that since 30 years the world’s consumption of riboflavin equivalent of 1.25 × 106 kg per year. However, the amount of riboflavin are currently more than 3.000 tons per year (Han Lim, et al.2001).

Bacillus Subtilis is a gram positive, aerobic bacteria that converts glucose directly to riboflavin. Cell metabolisms are highly dependent on environmental conditions, so the metabolic state often shifts during the cultivation period. Characterizing the transience of metabolic fluxes is important for understanding how cells responded to environmental changes. (Boyle NR, Morgan JA, 2009) 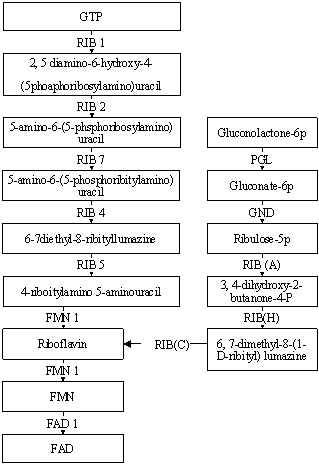 In silico models have prompted considerable interest and debate because of their potential value in predicting the properties of chemical substances for regulatory purposes. The European REACH legislation promotes innovation and encourages the use of alternative methods, but in practice the use of in silico models is still very limited. (Benfenati E. and others, 2011)

Conceptual modeling is a way of carrying out an analysis of a system in order to identify the types of things in the system, the actual instances of those things and the relationships between those things. Entity relationship (ER) modeling is a conceptual modeling approach commonly used in Computer Science to model a domain for the development of a database. However, ER modeling provides a useful approach to starting to think about models of biological systems.

Cytoscape platform providing a full feature set for biological network analysis. It is an open source software platform for visualizing molecular interaction networks and biological pathways and integrating these networks with annotations, gene expression profiles and other state data. Although Cytoscape was originally designed for biological research, now it is a general platform for complex network analysis and visualization. Cytoscape core distribution provides a basic set of features for data integration, analysis, and visualization.

The Ondex is a data integration platform which enables data from diverse biological data sets to be linked, integrated and visualised through graph analysis techniques. Ondex uses a rich and flexible core data structure, which has the ability to bring together information from structured databases and unstructured sources such as biological sequence data and free text. Ondex also allows users to visualize and analyze the integrated data. Ondex is free and open-source software. STRING is a database of known and predicted protein interactions. The interactions include direct (physical) and indirect (functional) associations. Together String and Ondex are very useful in case of exploring integrated networks and simulation.

SBML is neutral with respect to programming languages and software encoding; however, it’s oriented towards allowing models to be encoded using XML. By supporting SBML as a format for reading and writing models, different software tools (including programs for building and editing models, simulation programs, databases, and other systems) can directly communicate and store the same computable representation of those models. This removes an impediment to sharing results and permits other researchers to start with an unambiguous representation of the model, examine it carefully, propose precise corrections and extensions, and apply new techniques and approaches — in short, to do better science (Rhoads DG, Pring M, 1998)

3.6 RuleBender and BioNetGen and a rule-based language for modelling biochemical reactions

Modern biological experiments generate large amounts of data describing intracellular dynamics. Rule-based languages for describing intracellular biochemistry allow for the construction and simulation of detailed models with unprecedented scope and precision. Rule-based Models can be used to suggest new hypotheses and new ideas for future experimentation. Rule-based models can be difficult to understand and time consuming to debug. RuleBender is a free tool for constructing, debugging, simulating and analyzing rule-based biological models in the BioNetGen language.

Flux balance analysis is a mathematical approach for analyzing the flow of metabolites through a metabolic network. (Jeffrey D. Orth at el, 2010). OptFlux is an open-source and modular software to support in silico metabolic engineering tasks aimed at being the reference computational application in the field.

Stochastic Simulation Algorithm (GSSA) and its variants are cornerstone techniques to simulate reaction kinetics in situations where the concentration of the reactant is too low to allow deterministic techniques such as differential equations. To generate a network in advance of a simulation, which may subsequently be carried out either by numerically solving ODEs or by implementing a stochastic simulation algorithm (SSA) (Gillespie, 2007)

The non-specific precursors of riboflavin biosynthesis which are commonly used are guanosine triphosphate and ribulose-5-phosphate. Ribose and Guanosine triphosphate (GTP) is biologically responsible for the production of riboflavin with the help of enzymes (RIB1, RIB2, RIB4, RIB5, RIB7) that catalyze reactions to produced riboflavin, with help of (FMN) to produced Flavin mononucleotide. After that, produced Flavin adenine dinucleotide (FAD). It also has the role of a source of energy or an activator of substrates in metabolic reactions, like that of ATP, but more specific. It is used as a source of energy for protein synthesis and gluconeogenesis. GTP is essential to signal transduction, in particular with G-proteins, in second-messenger mechanisms where it is converted to guanosine diphosphate (GDP) through the action of GTPases.

Rib A helps stimulate the production of riboflavin and direct link between the other proteins. In addition, is responsible for the outputs of the biochemical processes. 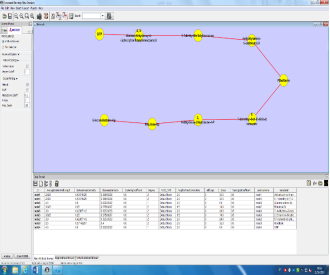 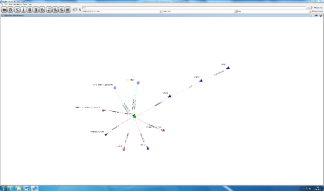 Metal Phosphate, which is linked to a protein. Motivating force proton transfer of phosphate is associated. Thus, the transfer of the phosphate group of phosphate, ATP to amino acids. In conclusion, it is easy to extract the pure biological industries inexpensive and riboflavin without toxic substances. Therefore, it is expected in the future production of large amounts of riboflavin and faster by yeasts and fungi away from harmful chemicals.

Riboflavin synthase catalyzes the transformation of 6,7-dimethyl-8-ribityllumazine into riboflavin in the last step of the riboflavin biosynthetic pathway. Gram-negative bacteria and certain yeasts are unable to incorporate riboflavin from the environment and are therefore absolutely dependent on endogenous synthesis of the vitamin. (Markus F. et at, 204) 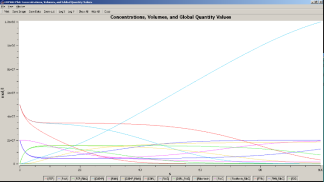 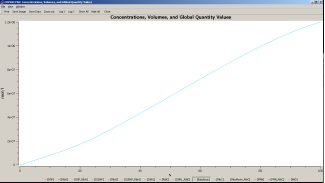 Rule-based modeling involves the representation of molecules as structured objects and molecular interactions as rules for transforming the attributes of these objects. 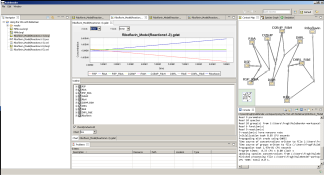 The approach allows systematic incorporation of site-specific details about protein-protein interactions into a model for the dynamics of cell regulatory networks, including processes involving cell signaling, gene regulation, and metabolism. The consequences of protein-protein interactions are difficult to specify and track with a conventional modeling approach because of the large number of protein phosphoforms and protein complexes that these interactions potentially generate. Here, we demonstrate how a rule-based model is specified in the BioNetGen language (BNGL) using the RuleBender interface and demonstrate how models can be visualized, simulated, and analyze.

4.5 Using the SSA with BioNetGen

Which Type of Model to use ODE or SSA?

At low molecule numbers: use stochastic model. At high molecule numbers: both types of simulation can be used, but SSA might require more “computing power” than the ODE simulation. When the number of molecules is high SSA behaves like ODE. A chemical reaction model can be converted into a set of ordinary differential equations (ODEs) using the law of mass action. This law states that the rate of a reaction is its rate constant times the concentration of the reactants raised to the power of their stoichiometry.

A better method for reasoning about genetic circuits is to utilize Gillespie’s stochastic simulation algorithm (SSA) (Gillespie, 1977). There are several variants of the SSA. This paper uses the direct method, which is shown in Algorithm 1. The SSA takes a chemical reaction network model, M, and computes a time series simulation α. The SSA is essentially a Monte Carlo algorithm, which treats each reaction as a random event.

For the SSA convert concentration to molecule number is using the formula:

is number of molecules,

is the Avogadro’s constant and 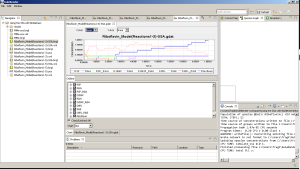 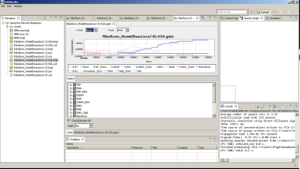 [*]To whom correspondence should be addressed.