Point-of-care testing (PoCT) has been defined as “those analytical patient-testing activities provided within the institution, but performed outside the physical facilities of the clinical laboratories (1). There has been a growing interest in point-of-care testing (PoCT) because of its advantages over standard laboratory procedures, it provides timely information to medical teams, facilitating rational, time-critical decisions, and has been demonstrated to improve patient outcomes in critical care settings (2). At least a dozen portable cholesterol and urea – testing instruments have been designed for use in community and office settings. These instruments have made mass screenings for these risk factors feasible and thus are now in widespread use for this purpose (3).

Dyslipidemia; including both hypercholesterolemia and hypertriglyceridemia represent significant risk factors for the development of peripheral artery diseases and negative health outcomes (4, 5).

High blood cholesterol increases the risk of heart disease, is a major modifiable risk factor, and contributes to the leading cause of death in the USA (6,7).

Chronic kidney disease (CKD) is now recognized as a major world-wide health problem (8). A method for the estimation of the urea in blood coming from individual organs and for clinical purposes must be efficient when only small quantities of blood can be obtained (9).

In Arar city many non- centralized Medical Setting used Reflotron for medical analysis and diagnosis disease. The purpose of this study was to assess the validity of Reflotron in the testing of total cholesterol and urea for screening and diagnosis in Arar city.

Cross sectional study held in Arar city in the period from 1 November 2013 to 10 November 2013, 30 blood sample was taken and measured by Reflotron apparatus and the results was rechecked by Dimension RXI MAX –apparatus to compare between the results between 2 methods.

Approximately 20ml of blood was collected from each participant, after fasting for 12h, using standardized venipuncture techniques in the antecubital vein in the bend of the elbow. In order to overcome technician error, two drops of blood (30μl) were collected immediately from the previously drawn venous sample by drawing blood into the capillary tube from the opening in the top of the venous tube before centrifuging the venous sample, rather than ‘sticking’ the finger.

Statistical analysis was done by SPSS 20 and suitable statistical methods were used, p<0.05 is considered significant 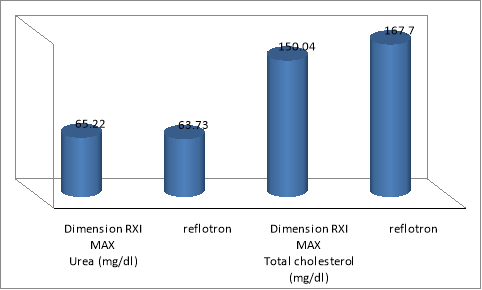 Table (2): Mean Percent of change between Reflotron and Dimension RXI MAX test in urea and cholesterol

Table 2 shows that the mean percent of change between Reflotron and Dimension RXI MAX test in urea and cholesterol was -0.4% and 12.5% respectively

The Reflotron has been marketed aggressively for use in community screening programs. The marketing has focused heavily on the instrument’s relatively low cost, ease of operation, and accuracy. This strategy has resulted in the widespread use of this instrument in blood cholesterol screenings. The Reflotron has been studied previously using various settings, sample sizes, and methodologies (10).

The MultiCare systems are pocket-sized reflectance photometers, in which the intensity of the color developed from a chromogen reaction being proportional to the concentration of the cholesterol or urea in the blood. The results of the MultiCare method compared with the reference method demonstrated good agreement between the 2 methods, the difference between the reading of the two apparatuses was not statistically significant in both Urea and cholesterol with a mean difference of 12.5% and –0.4% for cholesterol and urea, respectively. The availability of POCT lipid monitors has increased in recent years, any POCT must be validated for bias and imprecision to ensure that appropriate medical decisions and population screenings are made (11-17). The National Cholesterol Education Program (NCEP) in the United States recommended bias goals of 3% and 5% for cholesterol and triglycerides, respectively.