Preparation of molecularly imprinted polymer and its recognition properties for pyrrole

Abstract: The molecularly-imprinted polymer (MIP) of pyrrole was synthesized by a precipitation polymerization method using acrylamide (AM) as functional monomer and ethylene glycol dimethacrylate (EGDMA) as cross-linker agent in acetonitrile. MIP of pyrrole was characterized by FT-IR and UV. The surface morphology and specific surface area of the MIP was characterized by Scanning Electron Microscope (SEM) and nitrogen adsorption (BET). The adsorption behavior of the MIP was investigated in detail, which showed high selectivity for pyrrole, the results indicated that the maximum binding capacities of pyrrole on the MIP and the non-imprinted polymer (NIP) were 404 and 265 μmolÎ‡g−1, respectively. Application of MIP with a high selectivity to pyrrole provides a novel method for separating and purifying the trace nitrogenous heterocyclic compounds from tobacco.

Molecular Imprinting, as an interdiscipline derived from polymer chemistry, material science, and biological chemistry, is the method of preparing the polymer with particular selection to given template molecules[5-8]. So far, dozens of countries, (i.e., America, Japan, Germany, Australia, France and China) hundreds of academic institutions and enterprises have been working on the research and development of the molecularly imprinted polymer (MIP).Thanks to MIP is simple in preparation and can be easily preserved, with specific selectivity, high temperature, high pressure and acid corrosion, it has been widely used in the solid phase extraction[9], chromatography analysis [10], membrane separation [11], biomimetic sensor[12], ect.

The separation of bioactive ingredients in natural products is difficult because of their low contents, complex structures and diversity[13-15]. Compared with traditional methods (high performance liquid chromatography, silica gel column chromatography, etc.), molecular imprinting method has the advantages of high molecular recognition, simple operation, low solvent consumption and recyclable[16]. Thus, the molecularly imprinting technique has attracted considerable attention for extraction of compounds from complex mixtures of chemical species[17-18]. However, to the best of our knowledge, no molecularly imprinted polymer has been reported for the separation and determination of pyrrole in tobacco so far.

In this study, pyrrole imprinted polymer was synthesized by employing acrylamide (AM) as functional monomer and ethylene glycol dimethacrylate (EGDMA) as crosslinking. After the characteristics and analysis of the MIP and NIP, the adsorption behavior including kinetics and isotherms are discussed in detail. It was found that the MIP can specifically adsorb and identify pyrrole molecules, which meant the MIP can be applied to separation and enrichment of trace pyrrole in tobacco. The aim of this paper is to provide theoretical basis and technical supports for further study of the effects of nitrogen heterocyclic compound on tobacco quality.

2.2 Synthesis of MIP and NIP

The pyrrole imprinted polymer was prepared by precipitation polymerization in the following procedures. 0.1 mmol of pyrrole and 0.4 mmol of AM were dissolved in 20 ml of acetonitrile in a 40 mL glass vessel. The mixture was sonicated at room temperature for 30 minutes for pre-polymerization, and then was incubated at 4â„ƒ°C for 12 h. Subsequently, 2 mmol of cross-linker (EGDMA) and 10 mg of initiator (AIBN) were added stepwise. The glass vessel was degassed in a sonicating bath for 10 min, and filled with nitrogen for 30 min, and then sealed for polymerization at 60 °C for 24 h in a thermostat water bath. After polymerization, the resultants were extracted with a mixed solvent of methanol/acetic acid (9:1, v/v) for 48 h in a Soxhlet extractor to remove the template from its polymeric matrix, followed by ethanol for another 48 h to remove the acetic acid. The obtained MIP was dried in an oven at 60 °C overnight. As a control, the NIP was prepared and treated under identical conditions except for the omission of the template.

The binding experiments were carried out at 30 °C and 150 rpm on an orbital shaker with 100 mg of the MIP and NIP in a 100 mL flask containing pyrrole in 20 ml of acetonitrile. Batch experiments were performed to examine the adsorption kinetics and equilibrium. In the kinetic adsorption experiments, 2.5 mmolÎ‡L-1 pyrrole in acetonitrile was used. The adsorption isotherm experiments were conducted with the initial pyrrole concentration ranging from 0.2 to 5.0 mmolÎ‡L-1 for 2 h. After the adsorption, the concentration of the substrates in the supernatant solutions was determined via an UV-2450 Ultraviolet Spectrophotometer (Shimadzu, Japan). The binding capacity of pyrrole and the analogs was calculated from the equation:

Where: Q stands for the binding capacity (μmolÎ‡g−1), C0 and C are the initial and the residual concentrations (mmolÎ‡L-1) of pyrrole, respectively, V is the solution volume (mL), and m is the amount (mg) of the MIP or NIP used for the adsorption experiments.

3.1 Interaction between pyrrole and the functional monomers

In order to investigate the feasibility of imprinted pyrrole, two different functional monomers MAA and AM were investigated for the formation of complex with the template. The maximum absorption wavelength of pyrrole was measured by the UV-2450 Ultraviolet Spectrophotometer. As shown in Fig.1, compared with MAA, AM demonstrated much stronger interaction with pyrrole for the non-existent absorbance of pyrrole. It is possible that the complex of pyrrole with AM was formed via hydrogen bonding between N–H of pyrrole and –CONH2 of AM due to the pre-polymerization. 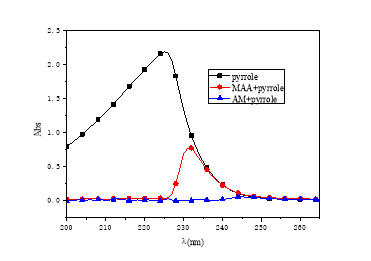 3.2 The molar ratio of pyrrole to the monomer 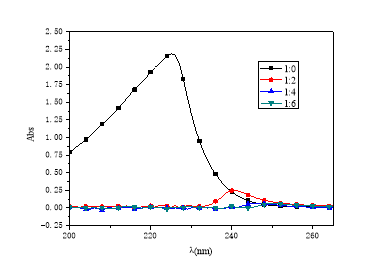 Fig.2 Absorption spectra of pyrrole with different proportion of AM in acetonitrile

3.3 Characteristics of MIP and NIP

3.3.1 Characterisation of MIP and NIP by FT-IR spectra

Pyrrole, AM, EGDMA, MIP (before and after eluting templates) and NIP were compared to affirm the successful preparation of MIP by FT-IR spectra. The FT-IR spectra of the MIP before and after removal of template pyrrole are presented in Fig.3a and Fig.3b, respectively. The –NH stretching vibration band of monomer AM (Fig.3e) appeared at 3580 cm-1 in the spectra of MIP before pyrrole removal (Fig.3a), which indicated that the template pyrrole formed hydrogen bonding interaction with monomer AM, this band is shifted to a higher wavenumber (at 3585 cm-1) after removal of pyrrole in MIP (Fig.3b). A conspicuous band at 1648 cm-1 in the spectra of MIP before removal of template pyrrole is ascribed to -C=C- aromatic ring stretching vibration of pyrrole (Fig.3d). This band disappeared after removal of pyrrole in MIP (Fig.3a) and was not observed in spectra of NIP (Fig.3c) due to absence of pyrrole. The peak at 3597cm-1 inFig.3c corresponds to the –NH stretching of monomer AM in the FT-IR spectra of NIP. The absorption peaks of MIP and NIP were similar, which means that both MIP after eluting templates and NIP have the same chemical components. 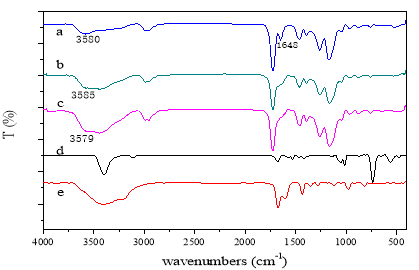 The morphology of MIP and NIP was shown in Fig.4. As shown in Fig.4 (a), the prepared polymer is microsphere and the particle is uniform, which indicated the spherical particle can be synthesized at the best experiment condition. The MIP microsphere has a narrow and small particle size, and the average diameter is 2μm. As for NIP, the microsphere with a narrow but big particle size, and the average diameter is 3μm. Much imino exist in the template molecule, which may suppress the polymerization, results in the bigger particle size of NIP compared with MIP. Besides, the whole reaction system polarity increased with the added template molecule, the solubility of MIP decreased, so that MIP precipitated from the whole reaction system early, which can also generate the bigger particle size of NIP. 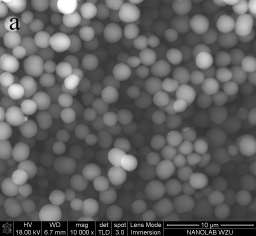 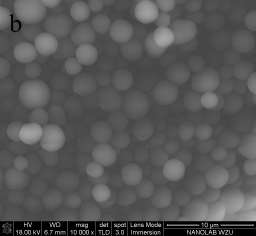 a Measured by Brunauer–Emmett–Teller (BET) method.

b Measured by Barrett–Joyner–Halenda (BJH) method.

3.4 Binding performance of MIP and NIP

3.4.1 Absorption isotherms and kinetic of pyrrole on the MIP and NIP

The absorption isotherm curves of pyrrole on the MIP and NIP were plotted in Fig.5. The absorption capacity was increased gradually with increasing initial concentration of pyrrole in the range of 0.2-5.0 mmol·L−1. In the higher concentration range, the binding capacity was close to be stable. The binding data can be analyzed by Langmuir equation:

Eq. (3) shows a linear relationship between Ceq/Q and Ceq. From the slope of the linear plot, the maximum binding capacities of pyrrole on the MIP and NIP were calculated to be 404 and 265 μmolÎ‡g−1, respectively, which means that the maximum binding capacity of pyrrole on MIP was 1.52 times of that on NIP. In addition, under the same experimental conditions, the adsorption capacity of the MIP at each concentration was higher than that of the NIP. It was indicated that MIP offered a higher affinity for the template molecule than NIP. 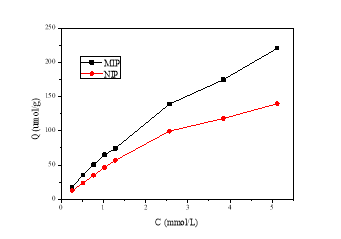 Fig.5 Adsorption isotherms of pyrrole on MIP and NIP

3.4.2 Binding kinetic curve of pyrrole pyrrole on the MIP

As shown in Fig.6, the adsorption kinetic curves of pyrrole on MIP and MIP were shown at the pyrrole concentration of 2.5 mmol·L−1 in acetonitrile. It can be seen that the binding capacity of MIP increased rapidly in the period of 0-60 min, and then the increments were reduced on the stage of 60-80 min, and the saturated binding was observed after 80 min. 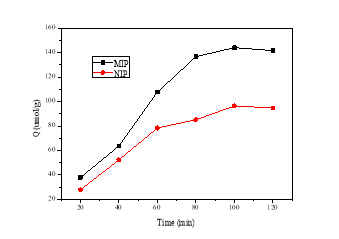 Fig.6 Adsorption kinetic curves of pyrrole on MIP and NIP

In the selective adsorption test, the target molecule pyrrole and the competitive one pyridine possess similar structure and co-exist in tobacco extract as nitrogenous heterocyclic compounds. As we can see in Table 2, it is obvious that the absorption capacity of pyrrole and pyridine of MIP was much higher than that of the NIP. The selectivity of MIP was 2.17 times higher than that of NIP, which suggested that the imprinting process significantly improved adsorption selectivity to the template.

Table 2 Binding capacity of different substrates on MIP and NIP

In this paper, the pyrrole molecularly imprinted polymer was synthesized via the facile precipitation-polymerization method. The prepared polymer is microsphere and the diameter is about 2 μm. The binding property experiments indicated the imprinted polymer can adsorb the pyrrole molecule selectively. Moreover, the adsorb effect of MIP is stronger than NIP. The selective adsorption experiments demonstrated the synthesized MIP microsphere has the obvious selective adsorption effect with pyrrole molecule when compared the similar structure pyridine. This work provided theoretical basis for the new direction of separation and purification in the field of tobacco with pyrrole and other heterocyclic compounds.