The purpose of the experiment was to gather an understanding for the chemical reactions, depending on the concentration. The rate of reaction is the speed of the chemical reaction. This experiment was to justify if the concentration is high or low will it affect the chemical reaction. ‘Hydrochloric acid constitutes the majority of gastric acid, the human digestive fluid. In a complex process and at a large energetic burden, it is secreted by parietal cells (also known as oxyntic cells). These cells contain an extensive secretory network (called canaliculi) from which the HCl is secreted into the lumen of the stomach. They are part of the epithelial fundic glands (also known as oxyntic glands) in the stomach. The chemical compound hydrochloric acid is the aqueous (water-based) solution of hydrogen chloride gas (HCl). It is a strong acid, the major component of gastric acid and of wide industrial use’. (LibreTexts. 2017). It is said from (chem4kids.com. 2017) ‘if a reaction has a low rate, that means the molecules combine at a slower speed than a reaction with a high rate’. The collision theory was used to envisage the rate for a chemical change, collisions don’t always have a chemical reaction. A chemical reaction needs to be equalized for it to have an effective collision. According to (Chemistry LibreTexts. 2017) ‘A collision will be effective in producing chemical change only if the species brought together possess a certain minimum value of internal energy, equal to the activation energy of the reaction. Furthermore, the colliding species must be oriented in a manner favorable to the necessary rearrangement of atoms and electrons’. 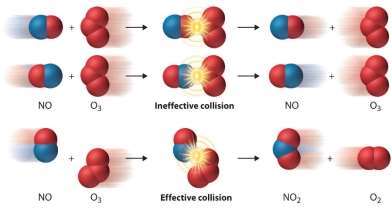 The chemicals in this experiment were Hydrochloric acid and Sodium thiosulfate. Research has shown about hydrochloric acid it is a component found in the human digestive fluid from (Hydrochloric acid. 2017) it says that ‘ Hydrochloric acid constitutes the majority of gastric acid, the human digestive fluid. In a complex process and at a large energetic burden, it is secreted by parietal cells (also known as oxyntic cells). These cells contain an extensive secretory network (called canaliculi) from which the HCl is secreted into the lumen of the stomach. They are part of the epithelial fundic glands (also known as oxyntic glands) in the stomach. The chemical compound hydrochloric acid is the aqueous (water-based) solution of hydrogen chloride gas (HCl). It is a strong acid, the major component of gastric acid and of wide industrial use’. If the human digestive fluid had a low concentration it would take longer to digest food. Concentration is the intensity of an element or substance in an experiment. Concentration is used in everyday life in food, drinks and chemicals added to certain things.

The Aim for this experiment was if the concentration would affect the rate of reaction.

This experiment started by the collection of the resources and safety equipment needed. Followed by the set up of the test tubes in the test tube rack and the measuring of 5ml of Sodium Thiosulfate for each of the test tubes. 15ml of Hydrochloric Acid of different concentrations ranged between 0.2 to 2.0 added to each test tube as soon as the hydrochloric acid is added the timer was stated and the experiment was observed till there weren’t any more changes to the chemicals. When the chemicals first had a change the time from when the hydrochloric acid added to the change was recorded into a results table. Once there was no change to the chemicals, the times was also recorded. The experiment was done three times to make sure there were the best results we could get and incase the results weren’t precise. After the third round of the experiments were finished the equipment used was cleaned up and the area used and all the resources and safety equipment used was returned. 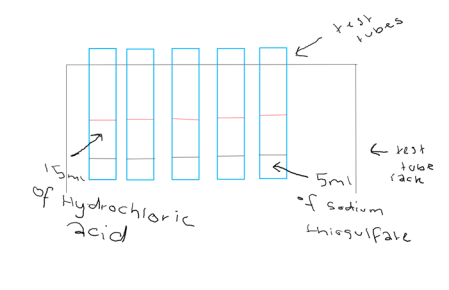 The health effect the chemicals have: 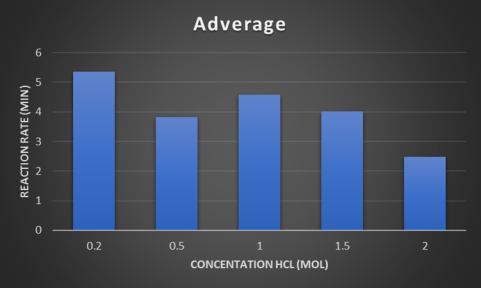 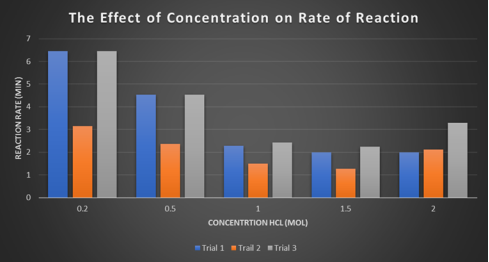 Experiment 3, just like all the other experiment it was started the same way with the clear mixed chemicals however, the chemical reaction happened when the sodium thiosulfate was being measured because it was accidently measured in the hydrochloric acid measuring cylinder so that effected the results for this experiment, so it was measured when it got to a darker shade of creamy white. 0.2M was affected 41 seconds after and it stopped 3.15 minutes after. 0.5 changed 38 seconds after and it stopped at 2.36 minutes.  1M was the one that was most effected when measuring the sodium thiosulfate occurred it was recorded in the results that it started at 0.06 seconds and stopped at 1.49 minutes. 1.5M started at 45 seconds and finished 1.27 minutes after finally 2M started at 10 seconds and stopped 2.11 minutes.

The research collected helped understand what was going on with the experiment it was known if it had a low concentration is would go slower and it would go faster if it had a high concentration. The Hypothesis was supported it did get faster and slower with each density of hydrochloric acid. Although it didn’t create a solid yellow substance, the experiment only created a liquid substance. This experiment has created a understanding of what would happen if the human digestive fluid has a much higher concentration it would help digest quicker but it would also eat the lining of your stomach.

This experiment worked well but there were many mistakes that occurred such as the results were not recorded properly because you needed to keep an eye on the experiment at all times to get the most accurate answer. The other mistake was with the measuring cylinders needed to make sure that this experiment used one for sodium thiosulfate and a another for hydrochloric acid otherwise it will be an inaccurate answer because the chemicals will already mix when your measuring how much you will needwith one of the chemicals. To improve this experiment, it would have been better if one person is always watching the tests so this experiment would have made the results more accurate and if the measuring cylinders were easier to tell apart so there was a clear distinction of which on was used for that certain chemical.