This experiment will allow one to determine the amount of sulphate SO42- by the gravimetric method. This determination is done by slowly adding a dilute solution of barium chloride, BaCl2 to a hot unknown sulphate slightly acidified with concentrated HCl. The reaction is as followed, Ba2+ + SO42- → BaSO4 (white precipitate). The white precipitate is then filtered off, washed with water, dried in the oven, and weighed as barium sulphate. The percentage of sulphate is then calculated from the weight of barium sulphate.

According to the results, the concentration of SO42- we obtained was 0.0345M and 3.31 g/L, which was close to the theoretical value of 3.38 g/L, at only a deviation of 2.11%. The experiment was successful and the results obtained were desirable.

The objective of the experiment is to determine the amount of sulphate by the gravimetric method.

In this experiment, the precipitation gravimetric method is used. The unknown sulfate solution is converted into an insoluble white compound, BaSO4. It is then filtered by suction filtration, washed, dried and weighed to determine the amount of sulphate. The following diagram shows the outline of the experiment.

Gravimetric analysis is defined as the quantitative analysis of the chemical composition of substances of materials based on the separation of each component of interest and weighting either the purified compound or a derivative of it.

The precipitation method involves converting the analyte to a sparingly soluble precipitate which is then filtered, washed free of impurities and converted to a compound of known composition by suitable heat treatment which can be weighed.

The volatilisation method involves volatilising the analyte of its decomposition products at suitable temperature. The product is then collected and weighed or alternatively determined indirectly from the loss in mass of the sample.

The electro-analytical method involves the depositing electrically the element to be estimated on a suitable electrode, avoiding filtration and decomposition, by controlling the experimental conditions. This is based on Faraday’s Second Law, i.e. when a given current is passed in series through the solution containing various ions, the amount of substances that is deposited will be in the ratio of their chemical equivalent.

In this experiment, the quantitative determination of sulfate, as barium sulfate BaSO4, is done by the precipitation method of gravimetric analysis. This involves precipitation by slowly adding a dilute solution of barium chloride, BaCl2, to a hot unknown sulfate solution slightly acidified with concentrated hydrochloric acid, HCl. The white precipitate is filtered off, washed with water, dried in the oven, and weighed as barium sulfate. The percentage of sulfate is then calculated from the weight of barium sulfate, this include the molarity and concentration of sulfate, SO42-, in g/L.

In the experiment, dilute barium chloride is added to an unknown sulfate solution slightly acidified with concentration HCl.

The particle size of a precipitate is influenced by precipitate solubility, temperature, reactant concentrations, and the rate at which reactants are mixed. The net effect of these variables can be qualitatively accounted for by assuming that the particle size is related to a single property of the system called relative supersaturation.

Precipitates form by nucleation and by particle growth. Nucleation is a process in which a minimum number of atoms, ions, or molecules join together to give a stable solid. These nuclei form on the surface of the suspended solid contaminants, such as dust particles. Further precipitation then is governed by the competition between additional nucleation and growth of existing nuclei (particle growth).

Adsorption is a process in which a substance (gas, liquid or solid is held on the surface of a solid. In contrast, absorption is retention of a substance within the pores of a solid. The charge on a colloidal particle formed in a gravimetric analysis is determined by the charge of the lattice ion that is in excess when the precipitation is complete. 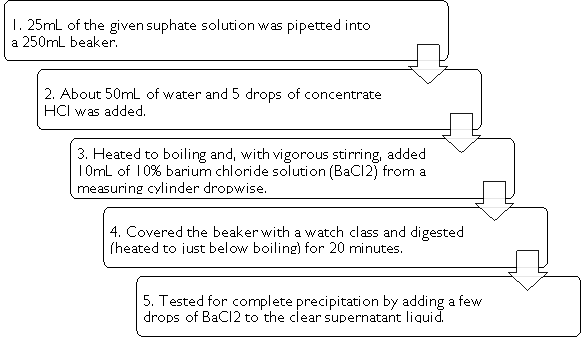 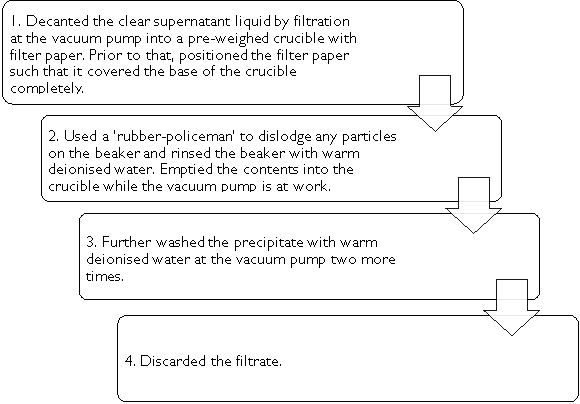 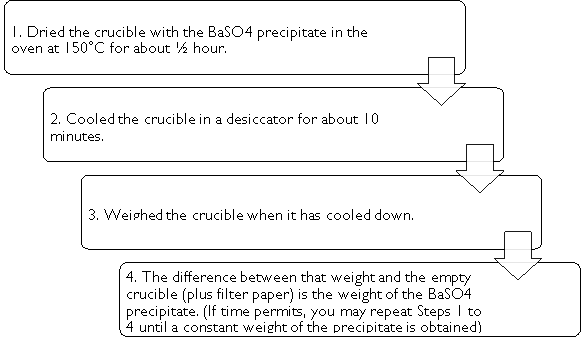 Weight of crucible with the precipitate = 17.7473g

crucible (with a piece of filter paper)

The results above show that the experiment was successful as the actual value was close to the theoretical value.

To minimise the rate of precipitation, the following were done:

At the end of the precipitation, a few drops of BaCl2 was added to the clear supernatant liquid to test for complete precipitation. After precipitation, suction filtration was performed. Suction filtration allows a higher rate of filtration by using a pressure gradient created by the aspirator. The precipitate was washed with deionised water and dried in the oven. It was then placed in a desiccator. The function of a desiccator is to remove moisture from a substance or to protect a substance from moisture, thus preventing water from the humidity in the environment to react with the substance.

Coprecipitation is a process in which normally soluble compounds are carried out of solution by a precipitate. There are four types of Coprecipitation: surface adsorption, mixed-crystal formation, occlusion and mechanical entrapment. Surface adsorption and mixed-crystal formation are equilibrium processes, and occlusion and mechanical entrapment arise from the kinetics of crystal growth.

Coagulation of a colloid does not significantly decrease the amount of adsorption because the coagulated solid still contains large internal surface areas that remain exposed to the solvent. The coprecipitated contaminant on the coagulated colloid consists of the lattice ion originally absorbed on the surface before coagulation plus the counter-ion of opposite charge held in the film of solution immediately adjacent to the particle. The net effect of surface adsorption is the carrying down of an otherwise soluble compound as a surface contaminant.

In mixed-crystal formation, which is also known as inclusion, one of the ions in the crystal lattice of a solid is replaced by an ion of another element. For this to occur, the two ions must have the same charge and their sizes must differ by no more than 5%. Furthermore, the two salts must belong to the same crystal class.

The extent of mixed-crystal contamination is governed by the law of mass action and increases as the ratio of contaminant to analyte concentration increases. Little can be done about it when certain combinations of ions are present in a sample matrix. This problem occurs with both colloidal suspensions and crystalline precipitates. When this occurs, the interfering ion may have to be separated before the final precipitation step. Alternatively, a different precipitating reagent that does not give mixed crystals with the ions in question may be used.

When a crystal is growing rapidly during precipitate formation, foreign ions in the counter-ion layer may become trapped, or occluded, within the growing crystal. Because supersaturation and thus growth rate decreases as precipitation progresses, the amount of occluded material is greatest in that part of a crystal that forms first.

Mechanical entrapment occurs when crystals lie close together during growth. Several crystals grow together and in so doing trap a portion of the solution in a tiny pocket.

Both occlusion and mechanical entrapment are at a minimum when the rate of precipitation formation is low, under conditions of low supersaturation. In addition, digestion often reduces the effects of these types of coprecipitation. The rapid dissolving and reprecipitation that occur at the elevated temperature of digestion open up the pockets and allow the impurities to escape into the solution.

Peptisation is the process by which a coagulated colloid reverts to its original dispersed state. When a coagulated colloid is washed, some of the electrolyte responsible for its coagulation is leached from the internal liquid in contact with the solid particles. Removal of this electrolyte has the effect of increasing the volume of the counter-ion layer. The repulsive forces responsible for the original colloidal state are then re-established, and particles detach themselves from the coagulated mass. The washings become cloudy as the freshly dispersed particles pass through the filter.

Washing is needed to minimised contamination but there is a risk of losses resulting from peptisation if pure water is used. This is usually solved by washing the precipitate with a solution containing an electrolyte that volatilises when the precipitate is dried or ignited.

Post precipitation occurs when the top of the precipitate, which is in contact with the mother liquor is contaminated by precipitation of impurities. This may be due to the primary adsorption of the common ion in excess, whereby the supersaturated solution of the second material is formed on the surface of the particle which offers nucleation sites to break supersaturation and causes a secondary precipitate to form.

The purity of many coagulated colloids is improved by digestion. Digestion is a process in which a precipitate is heated in the solution which is was formed (the mother liquor) and allowed to stand in contact with the solution. During digestion, water is expelled from the solid to give a denser mass that has a smaller specific surface area for adsorption.

Washing a coagulated colloid with a solution containing a volatile electrolyte is also helpful because any non-volatile electrolyte added earlier to cause coagulation is displaced by the volatile species. Washing generally does not remove much of the primarily adsorbed ions because the attraction between these ions and the surface of the solid is too strong. Exchange occurs, however, between existing counter-ions and ions in the wash liquid.

Precipitation from homogenous solution is a technique in which a precipitating agent is generated in a solution of the analyte by a slow chemical reaction. Local reagent excesses do not occur because the precipitating agent appears gradually and homogenously throughout the solution and reacts immediately with the analyte. Thus, relative supersaturation is kept low during the entire precipitation and homogenously formed precipitates are better suited for analysis. This results in marked increase in crystal size as well as improvements in purity.

In a nutshell, the experiment was a success and the results obtained were desirable. According to the results, the concentration of SO42- we obtained was 0.0345M and 3.31 g/L, which was close to the theoretical value of 3.38 g/L, at only a deviation of 2.11%. Although there may have been various possible sources of error, we have minimised them by lowering the rate of precipitation. The amount of sulfate was successfully determined by gravimetric analysis.