Usually one of the two phases is an organic phase while the other is an aqueous phase. Under equilibrium conditions the distribution of the solute (a) over the two phases is determined by the distribution law. After the extraction the two phases can be segregated because of their immiscibility. Component (a) is then separated from the extract phase by distillation and the solvent is then regenerated. Further extractions may be carried out to remove more of the component (a).

Once the product of interest has been extracted finally an absorbance reading can be found at its corresponding λmax.

Extraction of trimethoprim and sulfamethoxazole from SEPTRIN. 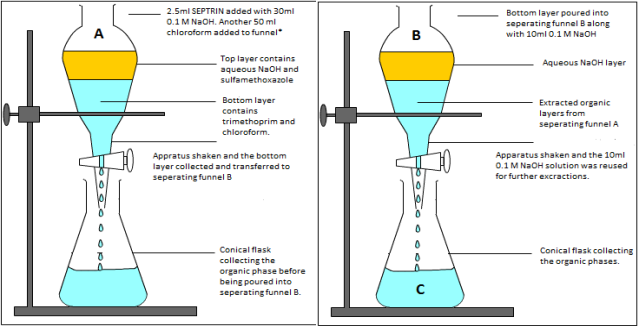 Figure 3: Illustrates a schematic of the entire extraction procedure consisting of trimethoprim and sulfamethoxazole in SEPTRIN oral solution. 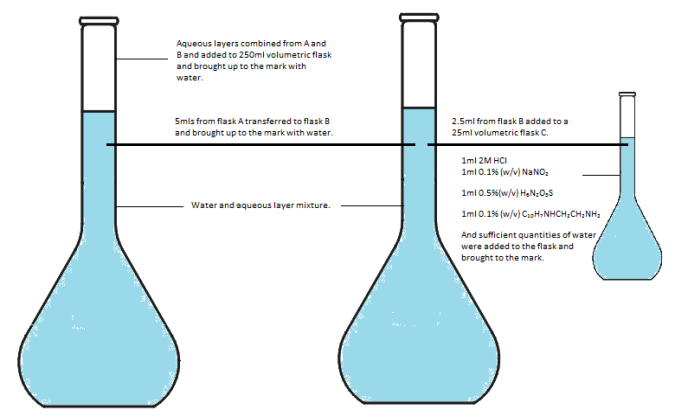 The standard was prepared in the exact manner in a 250ml volumetric flask with using 0.2g of sulfamethoxazole in 50ml 0.1M NaOH and topping up with water. The procedure to follow was the exact same as the sample prep.

The blank was prepared in the same manner and water was used along with the reagents outlined above in sample prep.

The blank was made by using 0.2M acetic acid solution.

Determining the quantity of trimethoprim and sulfamethoxazole in an oral suspension of SEPTRIN.

Table 1: Shows the absorbance values obtained at each respective Æ›max for trimethoprim and sulfamethoxazole.

The concentration of trimethoprim and sulfamethoxazole in 5ml of SEPTRIN were calculated as shown below.

It is already known that trimethoprim is classified as a benzylpyrimidine and it protentiates the antimicrobial activity of sulphonamides eg., sulfamethoxazole. So trimethoprim has a tendency to form insoluble complexes when combined with sulfamethoxazole in alkaline aqueous media. 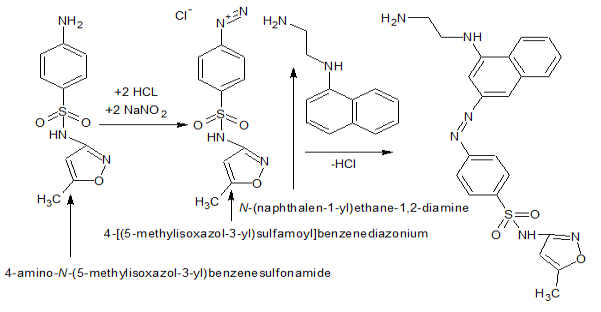 The reaction mechanism above shows the coloured dyeing agent N-(naphthalene-1-yl)ethane-1,2-diamine reacting with the diazonium to form the coloured product.

AMS is used as a reagent to speed up the chemical reaction if it is not included in the reaction before adding the dying agent then the process will either delay in reaching to its completion or not reach it at all.