Conclusion: The validated NP-UFLC method was developed for the quantification of venlafaxine in tablet dosage form.

Venlafaxine is a second-generation antidepressant drug marketed as a racemic mixture (Figure 1). The R-enantiomer exhibits dual presynaptic inhibition of serotonin and noradrenaline uptake, whereas the S-enantiomer is a serotonine reuptake inhibitor. Thus, the drug is the first and most commonly used serotonin and noradrenaline reuptake inhibitor. Its synthesis and that of several analogues were described many years ago. The synthetic routes are similar and vary according to the nature of the aromatic substituents. However, the final products are racemic mixtures, and they were crystallized as hydrochlorides.[1] Although the disposition of venlafaxine in humans was originally found not to be stereoselective.[2] In view of the near expiration date (June 2008) of the first patent for the racemic compound and of these recent clinical findings, venlafaxine appears to be a good candidate for a chiral switch.[3-4] 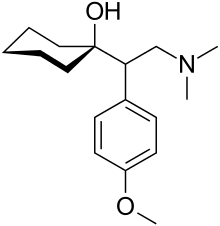 The trend toward single enantiomer drugs is clear and the number of racemic drugs that reach the market as new chemical entities is decreasing.[5] The relevance of chirality in antidepressant drugs was highlighted several years ago and many examples are illustrated in a recent very complete review.[6-7] In the previously cited research on the resolution of venlafaxine, the enantiomers were separated by either of two general approaches. The first is the classical method of diastereoisomeric salt formation and fractional crystallization and the second approach uses analytical enantioselective electro driven methods. In the latter cases, either cyclodextrinsin capillary electrophoresis.[8] There is only one literature report where an HPLC baseline separation of the enantiomers of venlafaxine extracted was achieved using a CSP and normalphase mode.[9] From an analytical point of view, enantioselective chromatography offers the advantages of a method that can be developed on a semipreparative or preparative scale for the isolation of single enantiomers, which then become available for pharmaceutical testing strategies and requirements for enantioselective.[10]

In the present research work, a simple, sensitive and accurate normal phase UFLC method to separate R and S-enantiomer of venlafaxine in bulk drugs and tablets using Lux amylase 2 column column has been reported for first time. The method was also validated to ensure the compliance in accordance with the ICH guidelines.

The composition of the mobile phase was n-hexane and ethanol in the ratio of 97:03 v/v. They were filtered before use through a 0.2 mm membrane filter, degassed in a bath sonicator for 10 min. The mobile phase was pumped from the solvent reservoir to the column at a flow rate of 1mL/min, which yielded a column backpressure of 96 kg/cm2. The run time was set at 20 min and column temperature was ambient. The volume of injection loop was 20 mL. prior to injection of drug solutions, the column was equilibrated for at least 30 min with the mobile phase flowing through the system. The eluents were monitored at 254 nm and data was acquired, stored and analyzed with the LC 10 software.

n-hexane and ethanol of HPLC grade was taken as mobile phase in the ratio of 97:3 % (v/v).

Standard stock solution (100 µg mL-1) of Venlafaxine hydrochloride was prepared by weighing exactly 10 mg of drug dissolved in isopropanol and diluted to 100 mL with same solvent. 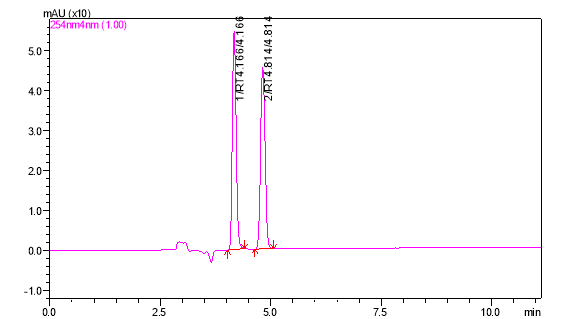 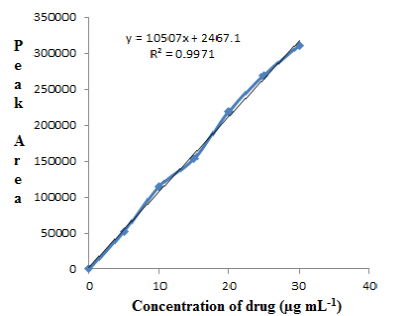 Five tablets (EFFEROX), each containing 25 mg of venlafaxine hydrochloride were weighed and finely powdered. Powder equivalent to 125 mg of venlafaxine hydrochloride was weighed and transferred to a standard volumetric flask. The contents were mixed thoroughly and filtered through a 0.45 μm membrane filter. 10 μL of the sample was injected in to UFLC system for the analysis. The peak profile and peak purity of both enantiomers are shown in Fig. 5, 6, 7 and 8. 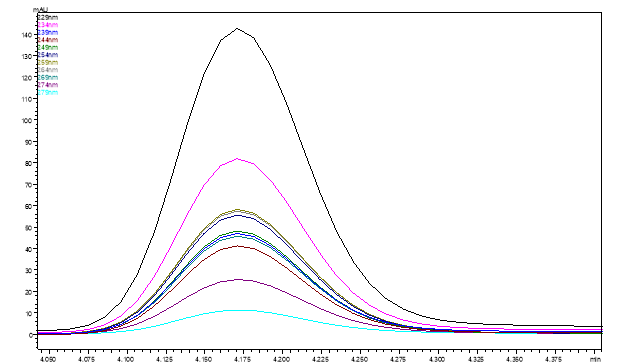 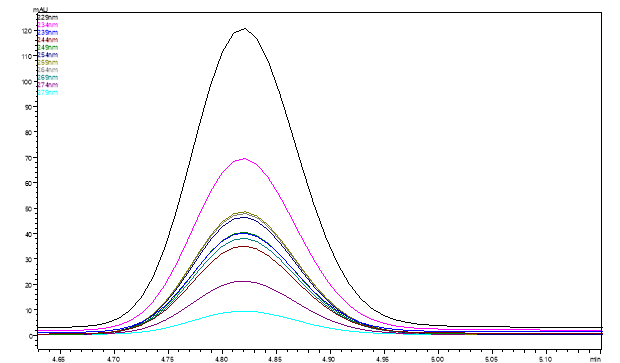 Validation of the method

The developed method for the assay of venlafaxine has been validated as per the current ICH Q2 (R1) guidelines.[11]

Table 1: Regression and sensitivity parameters of enantiomer-1 and enantiomer-2

The amount of venlafaxine hydrochloride enantiomers in the matrix was calculated using following formula.

T–total amount of drug estimated, A-initial amount of drug in the tablet powder and S- amount of pure drug added. The results revealed (Table 2), high recovery of Venlafaxine hydrochloride enantiomers, indicating that the proposed method for the determination of venlafaxine hydrochloride enantiomers in the tablet is highly accurate. The intraday and inter day percentage relative standard deviation values were shown in Table 3. These values were within the standard limits.

Limit of detection and limit of quantification

Limit of detection can be calculated using the following equation according to ICH guidelines: LOD = 3.3 x N/S

where N is the standard deviation of peak areas of the drug and S is the slope of the corresponding calibration curve. The results are shown in Table 1.

Assay of the drug

Robustness of the method and stability of the solution

The robustness of an analytical procedure has been defined by the ICH as a “measure of its capacity to remain unaffected by small, but deliberate variations in method parameters. The most important aspect of robustness is to develop methods that develop methods that allow for expected variations in method parameters. According to ICH guidelines, robustness should be considered early in the development stage of a method. The typical variations studied under this parameter are flow rate, wavelength and mobile phase composition. The results are tabulated in Table 5.

A simple, rapid and normal phase chiral UFLC method has been developed and validated for the enantiomeric separation of venlafaxine in tablet formulation. This method is precise, accurate, robust, and specific. Satisfactory results were obtained from the validation of the method. The short retention time (4.5 min for enantiomer 1 and 5.3 for enantiomer 2) obtained provides rapid determination of venlafaxine, which is significant for its routine analysis in quality control. The method exhibits an excellent performance in terms of sensitivity and robust. The experimental results of the present study showed that the proposed NP-UFLC method is simple, specific, precise, sensitive, rapid and accurate and is useful for separation of venlafaxine hydrochloride enantiomers in its pharmaceutical formulation.