Iron is a silvery-white or light gray metallic. It is ductile and malleable. Toughness is the ability to be involved in the thread. Scalability is the ability to be hammered into thin sheets. It is naturally present in only three of a magnetic element. The other two are nickel and cobalt Iron having high tensile strength. Stretching device, which can be stretched without breaking. Iron is also very feasible. Operability is the ability to bend, roll, hammer, cut, shape, form, or else with the work is to make a metal to a desired shape or thickness. The melting point of pure iron is 1536 â„ƒ (2,797 ° F), its boiling point is about 3000 â„ƒ (5400 ° F). Its density is 7.87 grams per cubic centimeter. Other physical properties of the melting point, boiling point, iron and steel alloys may differ.

The position on the periodic table:

Iron is the 26th element on the periodic table. It is located in period 4 and group 8. 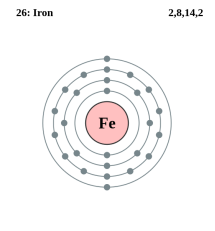 Background Iron is one of Earth’s most common elements. Nearly every construction of man contains at least a little iron. It is also one of the oldest metals, and at least 3,500 years ago, was first shaped into useful and decorative objects. Ferrite is a soft, white metal. Although iron is a common element, iron is almost never found in nature. The only pure iron known to exist naturally comes from fallen meteorites. Most iron is made of iron and other elements combine to form a mineral discovery. Iron oxides are the most common. In those minerals near the surface of the earth, with the highest in the commercial exploitation of iron ore and iron content is known. Iron ore is converted by multiple processes for all types of iron. The most commonly used process is the use of blast furnace to produce pig iron, iron and about 92-94% carbon 3-5% with a small amount of other elements. Iron has only limited use, and most of the iron into steel current where it is added to further reduce the carbon content and other elements, such as manganese, nickel, steel get into the unique properties of various steel alloys. 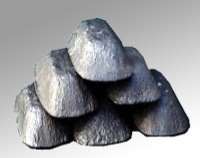 History Historians believe that the Egyptians were the first people with small amounts of iron, about five or six thousand years ago to work. They apparently used a metal extracted from meteorites. What is considered the iron mining and smelting point, the evidence in the first example of ancient Hittite culture is now Turkey’s. Because iron is used in the manufacture of weapons and tools far superior than any other known metallic materials, their production is a closely guarded secret. However, the basic technique is simple, the use of iron and gradually spread. For example, because it is useful for comparison with other materials, iron has disadvantages. Quality tools made â€‹â€‹from it are highly variable, depending on the ore is taken from, and the method for extracting iron area. In particular, the importance of the carbon and metal hardness; chemically change to occur in the extraction process is not understood in. Practices vary greatly in different regions of the world. There is evidence, for example, Chinese people can melt very early iron tools, and amazing accomplishments of a small amount of steel production in Japan, as evidenced by the heirloom sword dating back centuries. A similar breakthrough in the Middle East and in India, but the process has never appeared in other parts of the world. For centuries, Europeans lack methods, iron heated to the melting point of all. Production of iron ore and wood they burn slowly in a clay -lined oven. Iron separated from the surrounding rock, but never completely melted. Instead, it forms a hard shell of slag removal hammer. This repeated process of heating and hammering iron oxide mixed with oxygen to produce iron and carbon is removed from the metal. The result was nearly pure iron, easily shaped with hammers and tongs but too soft to take and keep a good edge. Because the metal is shaped, or forged, by hammering, it came to be known as wrought iron. Tools and weapons back to Europe from the East that has been cast into the shape of iron speak. Retain more carbon, iron harder than wrought iron, will hold a frontier. However, it is more brittle than wrought iron. Eastern Europe fixers know better iron, but do not participate in shaping a stronger ironwork process. Entire nations launched efforts to discover the process. The first known European breakthrough in the production of cast iron , which quickly led to the first practical steel, did not come until 1740 , in this year , the melting point of the material Benjamin Huntsman took out a patent for the production of steel springs to use the watch manufacturer . In the next 20 years or so, the process becomes more widely adopted. Huntsman is used to melt iron in the blast furnace of clay crucible. He then carefully added value measurements of pure carbon to molten metal. The resulting alloy is both strong and flexible, when cast into a spring. Since Huntsman initially only interested in making a better clock, his crucible steel led directly to the marine chronometer, which in turn makes the development of a global navigation to determine their east / west position by allowing the sailors accurately. In fact, he also invented the modern metallurgy is a side effect, he apparently did not notice.

Iron objects have been found in Egypt dating from around 3500 BC. They contain about 7.5% nickel, which indicates that they were of meteoric origin. Asia Minor, today’s Turkey, the ancient Hittites, were the first to smelt iron from its ores around 1500 BC and this new, stronger, metal gave them economic and political power. Iron age began. Certain types of iron, it is obviously better than others depending on the carbon content, although this is not realized. Some ore containing vanadium production called Damascus steel, ideal sword. The first person to explain the various types of iron was René Antoine Ferchault de Réaumur who wrote a book on the subject in 1722. This explained how steel, wrought iron, and cast iron, were to be distinguished by the amount of charcoal (carbon) they contained. The Industrial Revolution which began that same century relied extensively on this metal.

Iron ore has undergone several stages between the final product and steel. In the first stage, iron ore, limestone and coke is heated (pure carbon) in a blast furnace. Blast is a very large oven temperature can reach 1500 â„ƒ (2700 ° F). Removed in blast furnaces, coke oxygen from iron ore: Removing iron impurities limestone. Iron produced by this method is about 91-92% pure. The main impurities are left from the coke used in the furnace. This form is called pig iron. Pig iron is usually too brittle (it breaks too easily) to use in most products. Most scientists believe that the Earth’s core consists of a lot of iron. Many methods have been developed for the purification of iron. Common method used today is known as the basic oxygen process. In this process, molten pig iron in a large oven. Then pure oxygen gas is blown through the molten pig iron. Oxygen to burn more carbon in the iron: Though now obsolete, once the main source of heat iron stove for families, as well as the means for cooking. A small amount of carbon remains in the iron. The iron produced in this reaction is known as steel.

The term “steel” actually refers to a wide variety of products. The various forms of steel all contain iron and carbon. They also contain one or more other elements, such as silicon, titanium, vanadium, chromium, manganese, cobalt, nickel, zirconium, molybdenum, and tungsten. Two other steel-like products are cast iron and wrought iron. Cast iron is an alloy of iron, carbon and silicon. Wrought iron contains iron and any one or more of many other elements. In general, however, tends to contain little wrought carbon. 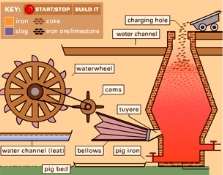 Isolation: It usually does not require laboratory with iron, because it is possible to buy. A small amount of pure iron can be performed by purification of crude iron with carbon monoxide. In this process, the middle is iron pentacarbonyl, Fe (CO) 5. Carbonyl decomposed by heating to about 250 â„ƒ, to form a pure iron powder.

The Fe(CO)5 is a volatile oily complex which is easily flushed from the reaction vessel leaving the impurities behind. Other routes to small samples of pure iron include the reduction of iron oxide, Fe2O3, with hydrogen, H2.

Almost all of the iron used in the commercial production of iron and steel industry, with a blast furnace. Most chemistry textbooks covered the blast furnace process. In essence, iron oxide, iron oxide, and reduce the carbon (coke), although the actual reducing agent may be in a furnace carbon monoxide, CO.

This process is one of the most significant industrial processes in history and the origins of the modern process are traceable back to a small town called Coalbrookdale in Shropshire (England) around the year 1773.

The effect of iron on society:

A hard, brittle, nonmalleable iron-carbon alloy, cast into to shape, containing 2 to 4.5 percent carbon, 0.5 to 3 percent silicon, and lesser amounts of sulphur, manganese, and phosphorus.