In general, solids might be classified in crystalline or amorphous. On the one hand, the crystalline solids comprise a regular set of molecules, atoms or ions into a rigid lattice which is characteristic of each substance. Thus, most crystals are anisotropic (the cubic system is an exception), namely, depending of the direction in which their properties are measured they can change. On the other hand, the amorphous solids were considered to be disordered crystalline solids (Stachurski, 2011) but many amorphous solids do not have a crystalline form, therefore, amorphous solids could be defined as substances with a random arrangement of atoms or molecules. Thus, amorphous solids are isotropic because their properties do not vary with the direction they are measured. Some examples of amorphous materials are glass, metals, polymers or thin films. Amorphous solids are less stable than crystalline ones and they can be converted into a desirable shape by molding them (Colfen and Meldrum, 2008). This provides them importance in the crystallization field since they can work as amorphous precursors to form crystalline phases.

The crystals can be classified into different general systems according to the table below. 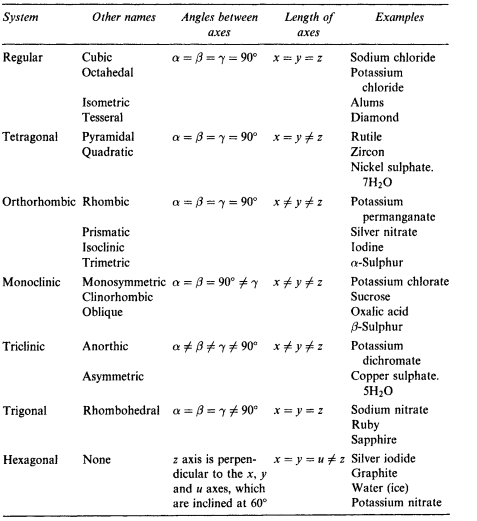 Different polymorphs can have different crystal system, for example the Silicon dioxide crystallize in three polymorphs namely cristobalite (regular), tridymite (hexagonal) and quartz (trigonal). They also can present different habit which is the shape that a crystal adopts depending on the occupation of each crystal face and the grade of growth of each face. The crystals might grow faster in one direction than in another and it confers them different forms or habits. Unless is not the most common, some polymorphs can have the same crystal habit.

Many crystals show some form of aggregation or intergrowth that is indicative of impurity. These composite crystals may appear in symmetrical forms or in random clusters. Some kinds of aggregation are the parallel growth or the twinning. In the parallel growth one form of a substance grow on the top of another form, the faces and edges of these forms are parallel. Twinning is a way of intergrown between two individuals with similar form which are joined symmetrically about an axis or a plane.

The solubility of a substance is the maximum quantity of solute that is dissolved in a given amount of solvent. When the concentration of the solution exceeds the solubility, the solution is supersaturated and the precipitation is driven. The supersaturation, S is defined with the following equation where c is the concentration of the species and ksp is the equilibrium molecular solubility product.

Once the system is supersaturated, the first particles can grow from solution when a critical nucleus of the new phase is formed. This is the crystallization process in which nucleation is followed by crystal growth.

The nucleation is called classical when the systems do not contain crystalline matter. In classical crystallization the crystal is formed under low reactant and additive concentrations and it is driven under thermodynamic control. Classical nucleation can be divided into two groups.

Nucleation if the first formation of the solid phase and is caused by the molecules, atoms or ions aggregation in a saturated solution where the nucleus prefer grow than redissolve.

The nucleation can occur spontaneously or being induced artificially and it can be divided in two different types:

On the one hand, the homogeneous nucleation occurs when in a supersaturated solution a stable nucleus is formed spontaneously. It is a difficult process where the molecules are coagulated and become orientated into a fixed lattice. A stable nucleus can be result of following collisions between the molecules in solution. Moreover, all the molecules have the same size before growing which is called the critical size rc. The particles smaller than rc will redissolve and the particles larger than rc will continue to the next stage, the crystal growing.

When a particle larger than the critical size is formed in a supersaturated solution, it starts to grow into a larger size crystal. Crystal growth is a process based in a diffusion of solute molecules or ions from solution to the particle surface followed by an integration process. Therefore, the two principal steps of the crystal growth are:

-Diffusion and/or convection mass transport from the liquid phase to the crystal surface. 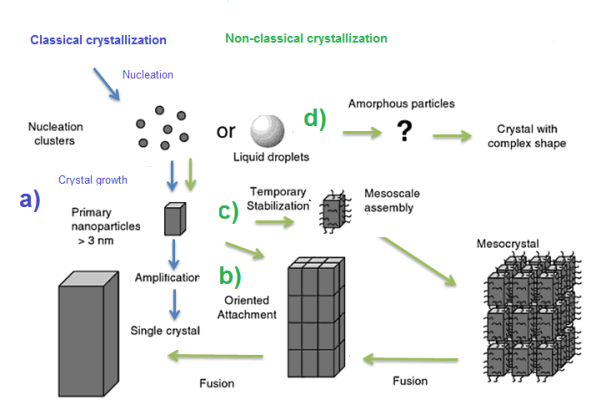