“Describe the process of drug discovery from nature.  Choose a plant that has been used as the source material for a conventional medicine as an example.” 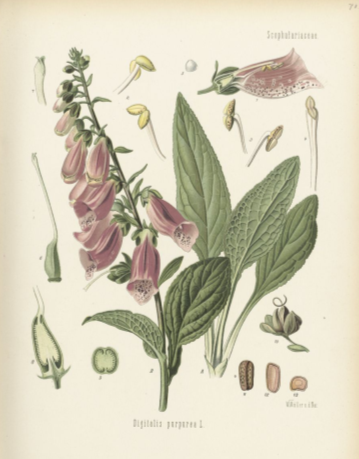 This essay describes the process of the discovery of digoxin, a cardiac glycoside derived from Digitalis spp..

To begin, this essay will observe the plant Digitalis purpurea L. (IPNI) and then continue by looking at traditional uses of the plant and its formal entrance in to medicine. The importance of standardisation and preparation will be considered, as will isolation of active constituents and their actions.

In particular, the cardenolides, Digoxin and Digitoxin will be examined, as well as the administration, contra-indications and toxicity of the drug.

The essay will end by comparing the preclinical studies and clinical trials of D. purpurea with what would be expected in modern times and look at  recent systematic reviews of digoxin.

Traditional use and discovery

In Anglo-Saxon times the plant was seen as unlucky and connected to super-natural entities but was used as an application to the breasts to cease lactation. (Pollington 2000)

The leaves (EB 2004) of D. purpurea were traditionally used in Medieval Europe to treat a number of ailments including epilepsy, headaches and spasms, TB and dropsy (Dauncey and Larsson 2018, Griggs 1997).

Pharmacologist and botanist, W Withering (1741-1799), was responsible for establishing the use of D. purpurea as a treatment for dropsy (oedema). He was inspired by an ‘old woman in Shropshire’ who used a renowned family recipe containing Foxglove. (Dauncey and Larsson 2018, Griggs 1997).

Withering fed Foxglove leaves to turkeys, observing that standardisation and dosage were of great importance to avoid toxicity. Withering examined administration of D. purpurea in 163 cases over 10 years (Dauncey and Larsson 2018, Griggs 1997) and published a summery of his observations in ‘An Account of the Foxglove, and Some of Its Medical Uses‘ (1785). (EB 2004).

Digoxin, the most commonly used isolated compound of Digitalis spp., was first isolated in Britain in 1930 by Dr Sydney Smith, from the leaf of D. lanata (Woolly foxglove). (Hollman,1996)

Active constituents and their actions

Cardiac glycosides are a secondary metabolite, of triterpenoid origin, biosynthesised by the Mevalonate pathway, from the metabolism of cholesterol. Cardiac glycosides inhibit Na+, K+, ATPase in the cell walls of the heart muscle, leading to an increase in intercellular Ca2+ concentration and stronger contractions. (Dewick 1997, Hoffman 2003)

The pharmacological effects of cardiac glycosides are made possible by the attached  aclycones, which are steroidal in nature (Henreich et al 2015), and modified by the sugar at C3, which allows the glycosides to be soluble enough to bind to the heart muscle. (Hoffman 2003).

However as the  solubility and removal rates of cardiac glycosides tend to be low, there is a possibility of accumulation with in the body, which would lead to toxicity. (Hoffman 2003). The therapeutic dose 50-60% of the toxic dose. (Dewick 1997)

Cardenolides are C23 cardiac glycoside structures, with an unsaturated five membered lactone ring at C17.  They are found in found in Digitalis spp. and some other plants.

Digitoxin and digoxin are the cardenolides isolated for pharmaceuticals. (Chevallier 2016) Their effect on the vagus nerve means they can be used to control atrial arrhythmias. (Hoffman 2003)

Digitoxin contains 5 OH groups (Researchgate). It is rapidly strengthens the heartbeat but as it is excreted  from the body  slowly as it is metabolised by the liver. digoxin is preferred as a long term medication (Chevallier 2016, Dewick 1997)

Digoxin is more hydrophillic than digitoxin and binds less strongly to plasma proteins. It is eliminated by the kidneys and is therefore preferred as a long term medication as there is less risk of accumulation.  (Dewick 1997) 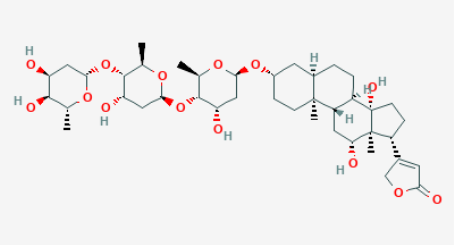 Digoxin can be taken in tablet, liquid or injection form. In the UK, the brandname for digoxin is ‘Lanoxin’.  Adult dosage is shown in Table 2.

The onset of action when taken by mouth is 1-2 hours and duration is up to 4 days. Possible adverse effects are usually due to increased levels of the drug in the blood and periodic checks on blood levels of Digoxin may be advisable. Digoxin may be more toxic in those with depleted potassium levels (BMA 2001)

Digitalis is contra-indicated for those on any medication which affects the heart (WebMD).

Long-term use of foxglove can lead to symptoms of toxicity, including visual halos, yellow-green vision, and stomach upset. (Dauncey and Larsson 2018)

Although it is generally advised to avoid Digoxin during pregnancy and breastfeeding (WebMD), the BMA reports there is no evidence of risk during pregnancy, although the dose may be adjusted and that, although Digoxin passes into the breastmilk adverse effects on the baby are unlikely at normal dosage. (BMA 2001)

Digoxin is contra-indicated for those with kidney disease, or in those who are taking medication which effects the passing of waste from the body (ie, some antibiotics, diuretics and laxatives), due to the increased risk of Digoxin accumulation. (WebMD).

BMA state the overdose danger rating of Digoxin as high. Adverse effects which may indicate the toxic dosage has been reached include severe tiredness, nausea, confusion, visual disturbances, palpitations.(BMA 2001)

There are also many medications (including some herbs) which may reduce levels of digoxin in the blood (EMC 2018). There is a digoxin specific antibody available for reversing life-threatening overdose, as well as biological assays.  (Dewick 1997)

Withering carried out studies and trials in a way that is recognisable today, observing case studies, incorporating animal experimentation and then enlarging and observing the population of  patients

Drugs destined for the human market are subject to numerous tests to ensure their safety.  Prior to clinical trials on patients, a number of preclinical studies take place which may include in vitro studies of cell, tissue and organ cultures, computerised models and in vivo experimentation using animals to test safety and efficacy. (Torjeses 2015).

Research continues on digoxin: Two systemic reviews on the use of digoxin were published in 2015. One concluded that, due to the potential risks and benefits, and the presence of alternative drugs, the role of digoxin in the management of patients with normal sinus rhythm and congestive heart failure is limited and there may be a risk of increased mortality in those with atrial fibrillation alone. However, in patients with both atrial fibrillation and systolic congestive heart failure, or following MI, further studies should be done. (Virgadamo et el 2015).

The second concluded that digoxin has a neutral effect on mortality and a lower rate of admission to hospital across all study types. (Ziff et al 2015)

This essay has described the process of drug discovery from nature using D. purpurea as an example. Observing the plant, it’s traditional uses and formalisation into medicine has demonstrated early research. The essay moved on to observe the isolation and uses of the cardenolides.  The molecular structure of digoxin and digitoxin were examined. Modern uses of digoxin have been discussed and the systematic reviews mentioned have demonstrated how the plant based medicine digoxin is standing up to modern scrutiny.