Well stimulation techniques are applied regularly to improve productivity and maximize recovery from oil and gas wells. One of these techniques is matrix acidizing which is probably the most extensively performed job due to its low cost as compared to hydraulic fracturing, and it’s appropriateness to both production improvement and to restore original permeability in damaged wells.

Acidizing treatments in general can be classified as :

In acid washing, the purpose is simply tubular and wellbore cleaning. Treatment of the formation is not considered. Acid washing is most often Carried out to clean out scale and other materials restricting flow in the well.

In fracture acidizing, acid is injected into a fracture created by a viscous fluid or the acid itself used to create the fracture. As acid progresses in the fracture, it reacts with the fracture walls, resulting in dissolution etching.

Matrix acidizing which is the focal of this research, is defined as the process in which an acid is injected into the formation at pressures below the fracturing pressure of the formation so that fractures are not created. The injected fluid will react with the formation and dissolve some of the materials present and hence eliminate the formation damage and/or increase the permeability in the near-wellbore region.(1)The acidizing process leads to improving the maximum recovery in both sandstone and carbonate reservoirs and increasing economic reserves.

In carbonate formations, matrix acidizing acts by forming conductive channels, called wormholes, through the formation. These wormholes penetrate beyond the near-wellbore region, or extending from perforations, as illustrated in figure (1.1). Acid-induced wormholes in carbonate rocks are similar to the holes made by earthworms underground, hence the name.(2)

Often, acid will form primarily single wormhole from limited numbers of perforations, without significant branching. That is the case when strong acids are used, such as HCl. Weaker acids, such as acetic acid, and retarded acid systems tend to create more branching of wormholes, which is preferable but only to a certain range. Retarded acid systems comprise viscosified acids (e.g., surfactant or polymer surfactant-gelled acid, emulsified acid, and foamed acid) or chemically retarded acid. The nature of wormholes created is controlled by the injection rate, temperature, and formation reaction characteristics.(2)

In carbonate formations, the most frequently used acid is hydrochloric acid (HCl) which reacts with carbonates and form water (H2O), carbon dioxide (CO2), and a calcium or magnesium salt. Typical reactions in carbonates are(3): 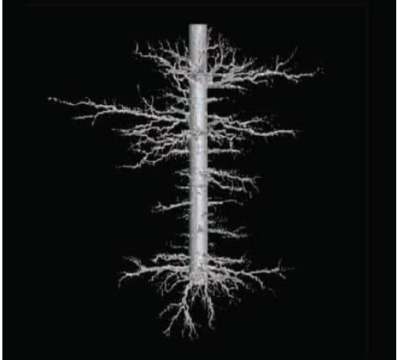 Formation damage is a common expression denoting to the impairment of the permeability by different processes. It is an undesirable functioning and economic problem that can take place during the different phases of oil and gas recovery from reservoirs, such as drilling , hydraulic fracturing, workover operations, and production.

Seven formation damage mechanisms were summarized by Bishop (1997).(6) These mechanism are:

1.3. General Information about Field under Study:

The Badra field is located in Wasit governorate 160 Km toward southeast from Baghdad city and extends across the borders to Iran. The Badra-1 discovery well was drilled in 1979. A second appraisal well (BD-2) was drilled in late-1980s but was abandoned due to the war before reaching the planned TD and main target Mauddud reservoir.

No DST, coring or production testing were done. Two appraisal wells (BD-4 and BD-5) were drilled; coring and testing was in 2013. In 2011, 169 sq.km seismic 3D acquisition was done and interpreted. Figure (1.3) shows the oil field and Badra field location. 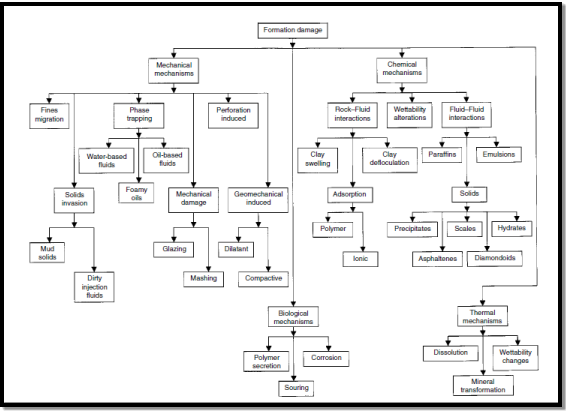 Figure (1.2): Classification and order of the common formation damage mechanisms 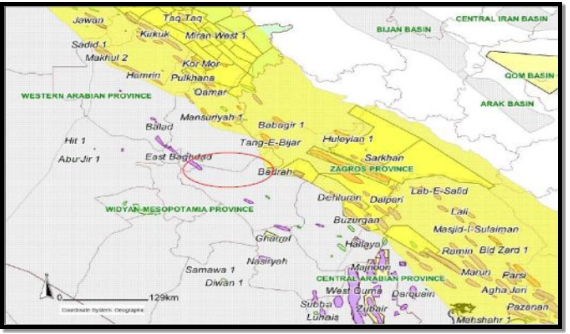 1.4. Objectives of the Present Study:

The present research aims to design matrix acidizing process for one of the Iraqi oil wells (Carbonate formation) using Hydrochloric acid (HCl) . The purpose is to follow up the formation damage occurrence due to drilling mud and completion fluids and removal, permeability improvement, and minerals dissolution in the carbonate formation caused by the acidizing process. As well as evaluating the matrix acidizing behavior, the effect of rock heterogeneity, and to determine the optimal injection rates of the acid to create channels in these formation.

A new laboratory apparatus will be designed and constructed to perform the planned experiments. The setup should reproduce ,as much as possible, the characteristics of the treatments conditions to investigate the effects of matrix acidizing on carbonate rocks having variable mineral composition.

Extensive experiments are required to be conducted to study the validation of the operative suitability and reliability of the apparatus under a broad range of pressure, flow rate, volume pumped, and acid concentration along with different additives.

The licensed “StimPro” software will be applied , for the first time, for matrix acidizing process for Iraqi carbonate formation.