Preformulation testing involved investigation of physical and chemical properties of a drug substance alone and when combined with excipients. It was the first step in the rational development of dosage forms.

These studies are categorised as under:

These are preliminary characteristics of any substance which is useful in identification of specific material. Following physical properties of API were studied.

Table no. : Characterization of API

The solubility studies for the drug were carried out using the orbital shaker. Solubility of the drug across different buffers was studied. The pH ranged from 1.2 to 6.8 (1.2 , 4.5, 6.8, and water). All the buffers were prepared according to USP 34 NF 29, 2011. Excess drug was added to 100 ml of water in stoppered conical flasks and were agitated continuously in a orbital shaker for 24 hrs at 200 rpm and room temperature (25° C), till saturation was observed. Then, the samples were filtered using 0.45 µ Nylon (47 mm) syringe filters. Now the filtered samples were analyzed using UV spectrophotometer Table No.6.3 below describes the procedure of buffers preparation.

Table7.3 Solubility of API in buffers of different pHs

There is always possibility of Drug – excipient interaction in any formulation due to their intimate contact. It is also necessary to determine any possible interaction between excipients used in the formulation. This will also indicate success of stability studies.

FTIR studies were carried out for pure drug alone and blend of drug & excepients. The FTIR spectroscopy (BRUKER Optics FTIR spectrophotometer) is employed as analytical tool to check the drug-excepients interaction, using the KBr disc method. The FTIR spectra were scanned and recorded between 400 and 4000 cm-1

Nearly to a fine alkali halide (example KBr) powder of 200 to 250 mg 0.1 to 1.0 % sample is mixed well. Later it is pulverized and in a pellet-forming die it is placed. Around an 8 tons force under a vacuum of several mm Hg is applied to form transparent pellets. 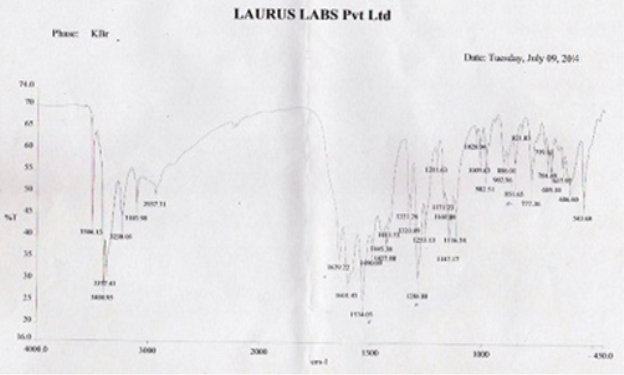 Table no. : Interpretation of FTIR spectra of pure famotidine

Table no. : Interpretation of FTIR spectra of pure famotidine

10 mg Famotidine each was dissolved in pH 6.8 phosphate buffer and volume is made

up to 100 ml to obtain solution of 100 µg/ml. Now from this stock solution further dilutions were done with PH 6.8 to obtain solutions of 10 , 20 , 30 and 40 µg/ml Absorbance of each solution was measured at 268 nm using Perkin Elmer UV/Vis double beam Spectrophotometer.

The experiment was performed in triplicate and based on average absorbance; the equation for the best line was generated. The results of standard curve prepared in pH 1.2, 4.5 & 6.8 were shown below 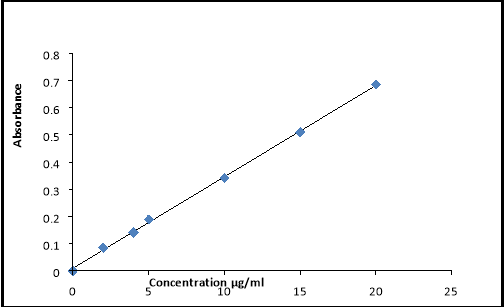 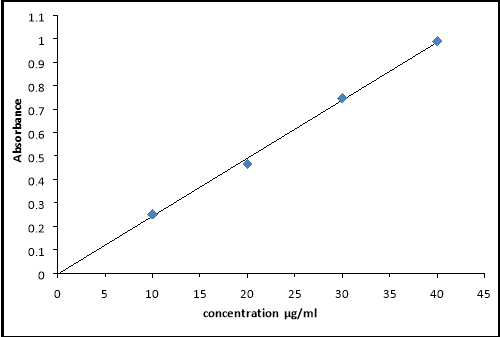 Calculation of initial dose and maintenance dose for the design of elementary osmotic pump of famotidine for 12 hours:

There are no sustained release formulations for famotidine in the market, hence the total dose (DT) consisting of initial (DI) and maintenance doses (DM) for formulating the famotidine sustained release was calculated as per Robinson and Eriksen equation with a zero order release principle36 . In this profile the rate of delivery is independent of the amount of drug remaining in the dosage form and constant over time as shown by the Eq. 6.1

Where, k0 is the zero order rate constant for drug release (amount per time).

DI is required to give initial rapid release of drug so as to attain the minimum therapeutic level immediately after dosing.

Where, C ssavg is the average steady state plasma level, V d is the volume of distribution and F is the fraction of dose absorbed.

In practice, D M (mg) is released over a period of time and is equal to the product of H (the number of hours for which sustained action is desired after initial dose) and the zero order rate constant, k0 (mg/hr).

Therefore the Eq. 6.4 can be expressed as

Ideally the maintenance dose (DM) is released after DI has produced a minimum therapeutic blood level of the drug. However due to the limits of formulations, drug release even starts from DM also from the beginning i.e. at t=0, thus increasing the initial drug level in the blood. Hence it is necessary to reduce the initial dose of the drug to account for the excess release for drug from DM by using a correction factor, k0tp. This correction factor is the amount of drug provided by DM during the period from t=0 to the time of the peak drug level, tp. The corrected initial dose (DI*) becomes DI-(k0tp). Then the total dose is

Elimination half life (t1/2) of famotidine is 3 hrs (average of 2.5 to 3.5 hrs), the time to reach peak plasma (t p) is 3 hrs and Vd = 80.5 L and F = 0.4 54,55 . From the literature of the PEPCID (innovator product of famotidine in USA) label and pharmacological review information 49,, it was found that the plasma levels after multiple doses are similar to those after single doses indicating the C max is similar to Cssavg , therefore Cmax of 0.07 mg/L was taken as C ssavg .

From the above calculations the total dose obtained for sustained release of famotidine for 12 hrs is 40.726 mg. The total dose was rounded off to 40mg for the convenience. Initially the dosage form should release the total initial dose (i.e. 4.93 mg ~ 5.0 of drug, means 11% of total 50 mg dose) in the first 1 hr followed by maintenance dose (i.e. 40-5=35 mg of drug) for up to 12 hrs there after at a release rate of 3.25 mg/hr (i.e. 8.125% of total 40 mg dose). Based on these assumptions the theoretical release profile was predicted and shown