In the present work, we report the growth and structure of a new mixed crystal C16H16KLiO11 (PLHP), which crystallizes in a non-centrosymmetric space group P21 and SHG-active. The grown crystals were subjected to various characterization studies which are briefly described below. Here it is established that by synthesising the mixed crystal in a different route with a controlled concentration of additive, one can sustain nonlinearity at the macro level by allowing the specimen to crystallise in a polar space group. The main objective of the investigation is to design a noncentrosymmetric structure by attempting a different route of synthesis, leading to NLO activity. Steering to noncentrosymmetry from centrosymmetry is made possible by changing the growth conditions.

acidic conditions using de-ionized water. After successive recrystallization, the mixed crystals were grown by the slow evaporation solution growth technique. The crystallization took place within 20-25 d and the crystals were harvested. Photographs of as- grown crystals are shown in Fig. 3.1.1. 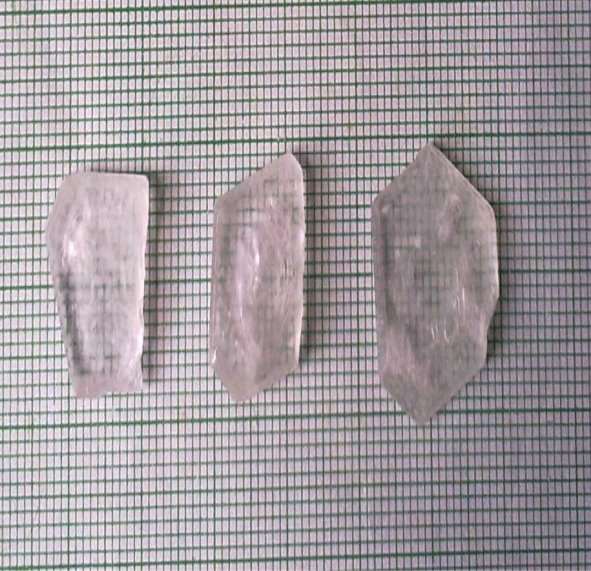 The FT-IR spectrum of the as-grown specimen is shown in Fig.3.1.2. An absorption band in the region 500-900 cm-1 corresponds to the C-H out of plane deformations of aromatic ring. The C=O stretching frequency appeared at 1670 cm-1. The characteristic vibrational patterns of KHP104, lithium hydrogen phthalate (LiHP) 22 and PLHP are given in Table 3.1.2. A slight shift of some of the characteristic vibrational frequencies could be due to the stress development because of Li incorporation. 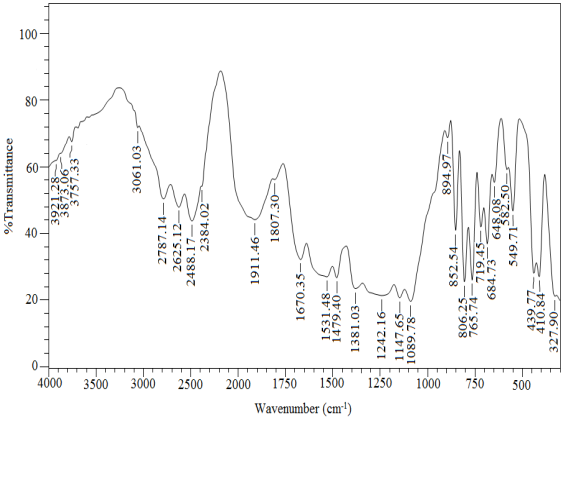 Thermal studies reveal the purity of the material. The TGA curve shows a single stage weight loss at ï¾150o C due to loss of water molecule. In DTA, the broad endothermic peak at 420°C, is due 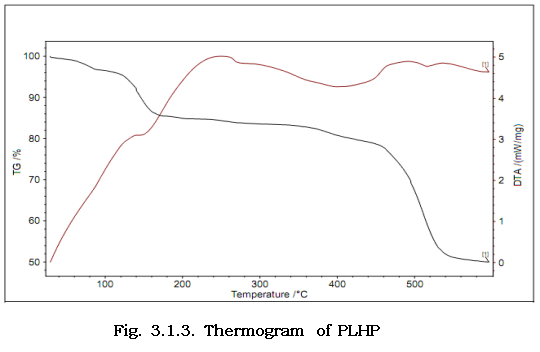 The SEM micrographs give information about the surface morphology and it is used to check the imperfections105. The SEM pictures of PLHP at different magnifications are shown in Fig. 3.1.4.1. It shows highest surface roughness in a plate like structure, due to defect centers and crystal voids. The presence of Li and K in the PLHP crystal lattice is confirmed by energy dispersive spectroscopy (EDS) (Fig. 3.1.4.2). 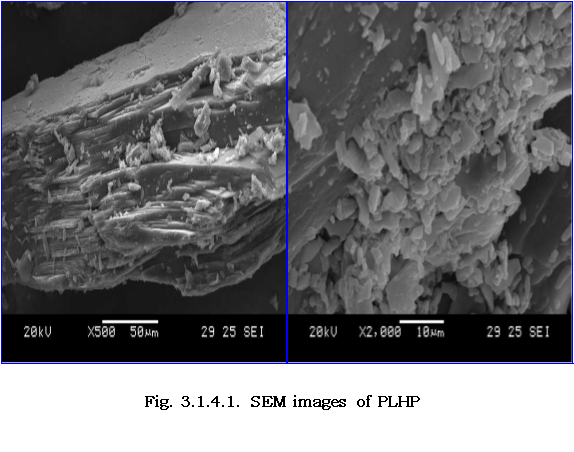 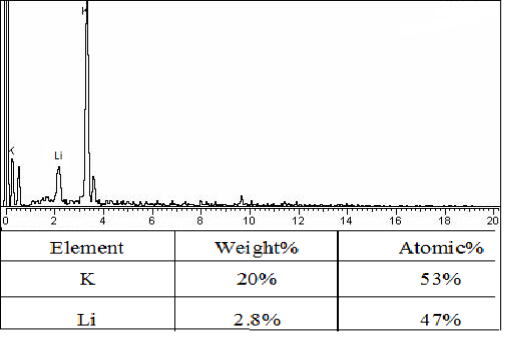 Atomic absorption spectroscopic studies were carried out to quantify Li (20.6 ppm) and K (21. ppm ) in the sample. Also, CHN elemental analysis was performed to estimate the quantity of carbon and hydrogen present in PLHP. The elemental composition found was: C 42.93%, H 3.29%. The calculated composition was: C 44.63%, H 3.7%.

The UV-visible spectrum of the mixed crystal PLHP reveals high transmittance in the visible region and the lower cut-off wave length is observed at ~300 nm. Incorporation of foreign metal ion into the KHP crystal lattice does not destroy the optical transmission of potassium hydrogen phthalate. The concentration of an absorbing species can be determined using the Kubelka-Munk equation106 correlating reflectance and concentration,

where F(R) is Kubelka-Munk function, R is the reflectance of the crystal, α is absorption coefficient, s is scattering coefficient, A is absorbance and c is concentration of the absorbing species. The direct band-gap energy of the specimen is estimated as 4.05 eV, from the Tauc plot [F(R)hν]2 versus hν (eV) (Fig. 3.1.6). 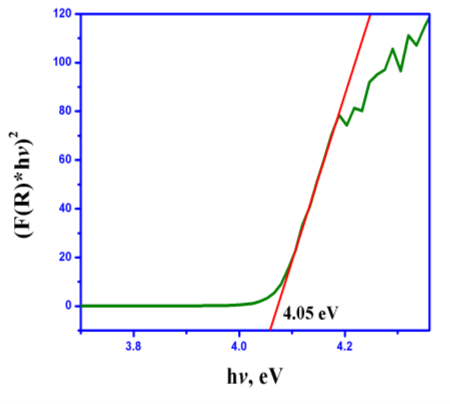 The powder XRD pattern of PLHP shows that the sample is of a single phase without a detectable impurity. Narrow peaks indicate the good crystallinity of the material. At room temperature all the observed reflections were indexed. The indexed powder XRD pattern is shown in Fig. 3.1.7.1. Peak positions in powder XRD match with simulated XRD patterns from single crystal X-ray diffraction. The relative intensity variations could be due to the preferred orientation of the sample used for diffractogram measurement. Also, the mosaic spread of powder and single crystal patterns may differ, resulting in intensity variations. The structure of PLHP is elucidated and the ORTEP is given as Fig. 3.1.7.2. Three-dimensional view of intramolecular hydrogen bonding interactions is displayed in Fig. 3.1.7.3. The chemical formula C16H16KLiO11 confirms the presence of K and Li in the crystalline matrix, well supported by energy dispersive X-ray spectroscopy (EDS) and atomic absorption spectroscopy (AAS). The specimen crystallizes in the monoclinic crystal system with the noncentrosymmetric space group P21. The crystallographic parameters of PLHP, KHP, LiKP and LiHP are listed in Table 3.1.7.1. 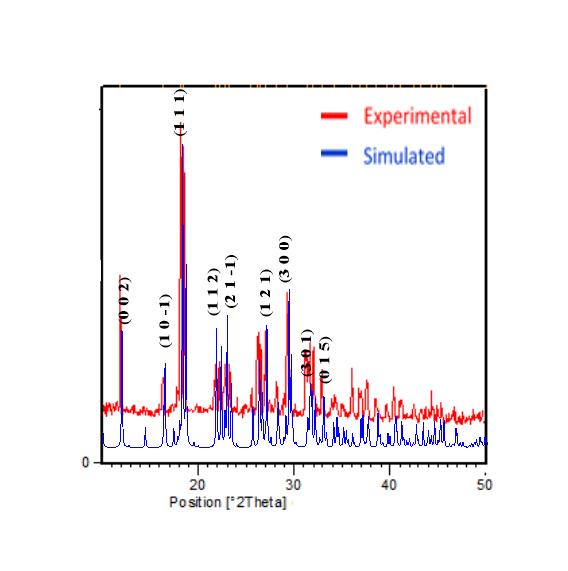 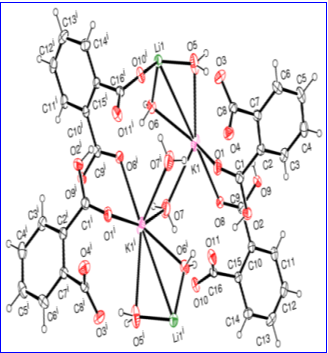 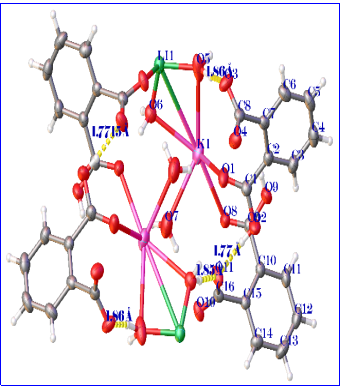 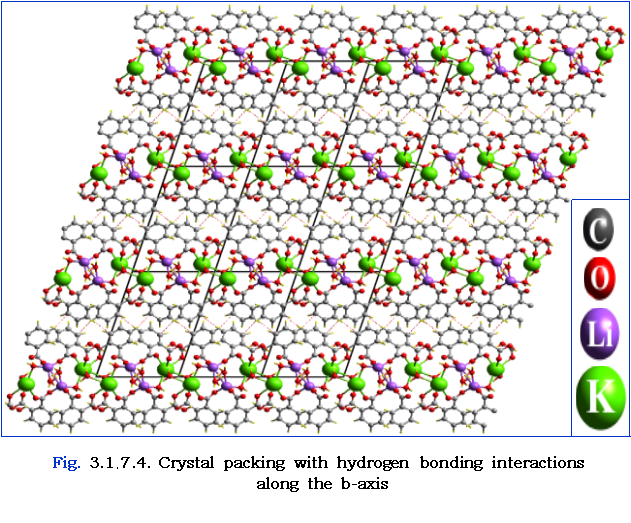 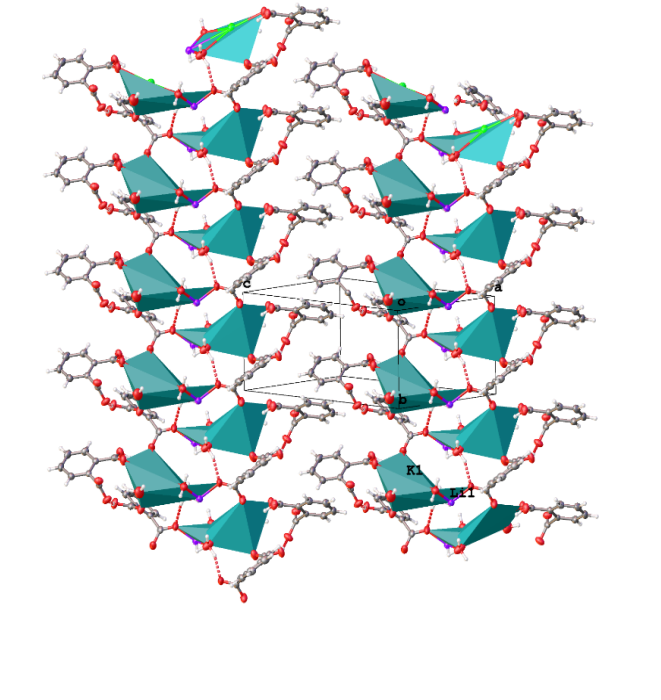 In order to confirm the influence of incorporation of lithium on the NLO properties of KHP the pure and mixed crystals were subjected to SHG test with an input radiation of 6.5 mJ/pulse. The outputs give the relative SHG efficiencies of the measured specimens. As seen, the SHG activity of the mixed crystal is comparable with that of KHP (Fig. 3.1.8) and it is quite likely due to the facile charge transfer, not disturbed by Li-incorporation. Although many materials have been identified that have higher molecular nonlinearities, the attainment of second-order effects requires favourable alignment of the molecule within the crystal109. It has been reported that the SHG can be greatly enhanced by altering the molecular alignment through inclusion complexation110. The mixed crystal PLHP grown from an aqueous solution containing equimolar quantities of reactants crystallize in a noncentrosymmetric space group P21 and SHG-active, whereas when Li is taken in excess in the growth medium the formed mixed crystal LiKP crystallizes in a centrosymmetric space group P1 and hence SHG-inactive29. It is interesting to observe that the mixed crystal of KHP synthesized by a different route crystallises in a polar space group. By changing the growth conditions it is possible to attain noncentrosymmetry in preference to centrosymmetry, a required characteristic of an NLO material. 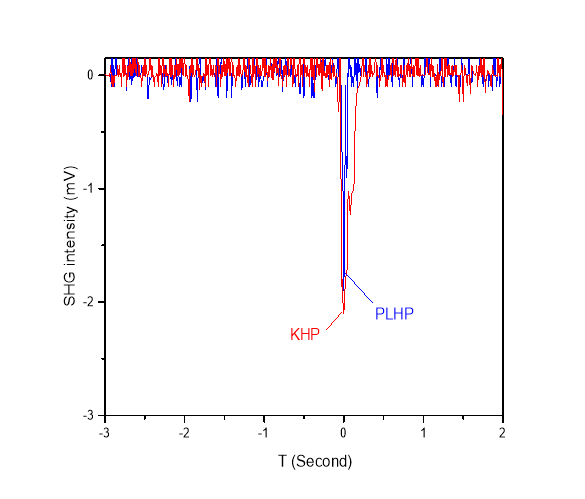 Fig. 3.1.8. The comparative SHG oscilloscope traces of the powder samples of KHP (red) and PLHP (blue)

The Hirshfeld surfaces of PLHP have been demonstrated in Fig. 3.1.9.1 by showing dnorm, shape index, de and di. The Hirshfeld surface111-113 surrounding a molecule is defined by points where the contribution to the electron density from the molecule under consideration is equal to the contribution from all the other molecules. For each point on that isosurface, two distances are determined: one is de representing the distance from the point to the nearest nucleus external to the surface and second one is di, representing the distance to the nearest nucleus internal to the surface. The normalized contact distance (dnorm) is based on both de and di. The surfaces are shown as transparent to allow visualization of the molecule around which they were calculated. The circular depressions (deep red) which are visible on the Hirshfeld surface are an indicator of hydrogen bonding contacts and other visible spots in Fig. 3.1.9.1a are due to Oâˆ™âˆ™âˆ™Li (3.6%), Hâˆ™âˆ™âˆ™O (14.5%), Oâˆ™âˆ™âˆ™H (15.9%), Kâˆ™âˆ™âˆ™O (2.0%) and Liâˆ™âˆ™âˆ™O (3.5%) interactions. The short interactions represented by deep red spots in de surface (Fig.3.1.9.1c) are Oâˆ™âˆ™âˆ™Li contacts (3.6%). The dominant Oâˆ™âˆ™âˆ™H (14.5%), Liâˆ™âˆ™âˆ™O (3.5%) and Hâˆ™âˆ™âˆ™H (31.7%) interactions are viewed in di surface plots by the bright red area in Fig. 3.1.9.1d. The shape index indicates the shape of the electron density surface around the molecular interactions. The small range of area and light color on the surface represent a weaker and longer contact other than hydrogen bonds. The two-dimensional fingerprint plots114 of PLHP exemplify the strong evidence for the intermolecular interactions pattern. In the fingerprint region (Fig. 3.1.9.3), Oâˆ™âˆ™âˆ™H (15.9%) interactions are represented by a spike in the bottom area whereas the Hâˆ™âˆ™âˆ™O (14.5%) interactions are represented by a spike in the top left region. Hydrogen-hydrogen interactions Hâˆ™âˆ™âˆ™H (31.7%) are very high while compared to the other bonding interactions. Sharp curved spike at the bottom left area indicates the Oâˆ™âˆ™âˆ™Li (3.6%) and top left corner with curved spike indicates the Liâˆ™âˆ™âˆ™O (3.5%). The finger print at the bottom right area represents Câˆ™âˆ™âˆ™H (11.7%) interactions and top right area represents Hâˆ™âˆ™âˆ™C (8.7%) interactions. The number of interactions in terms of percentage are represented in a pie chart in Fig. 3.1.9.2. 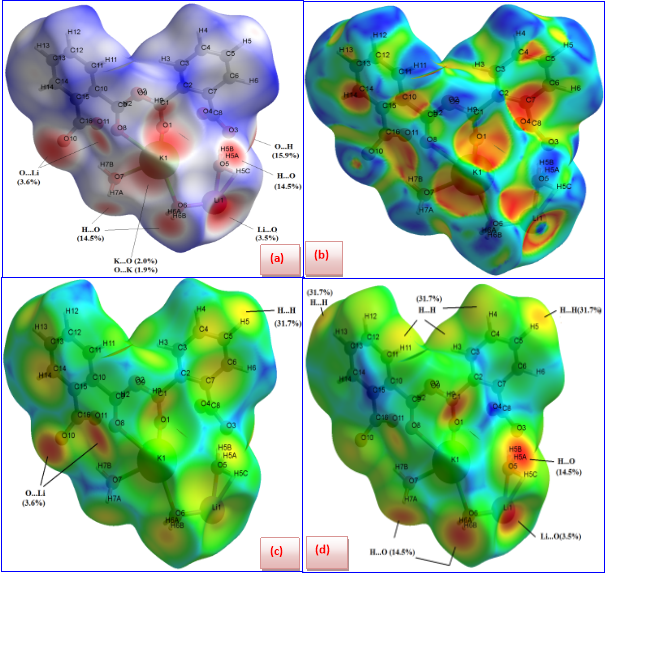 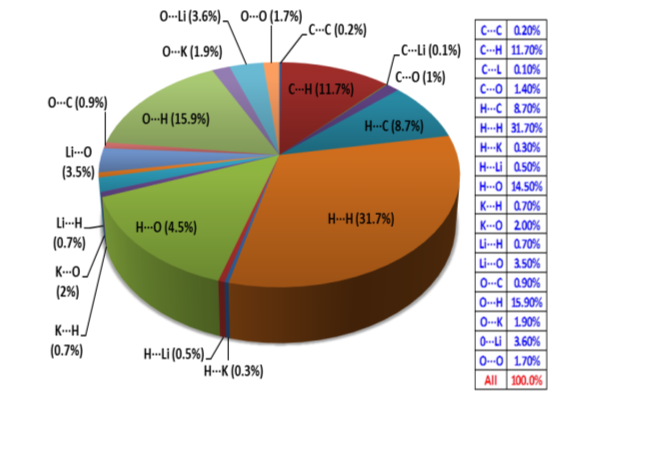 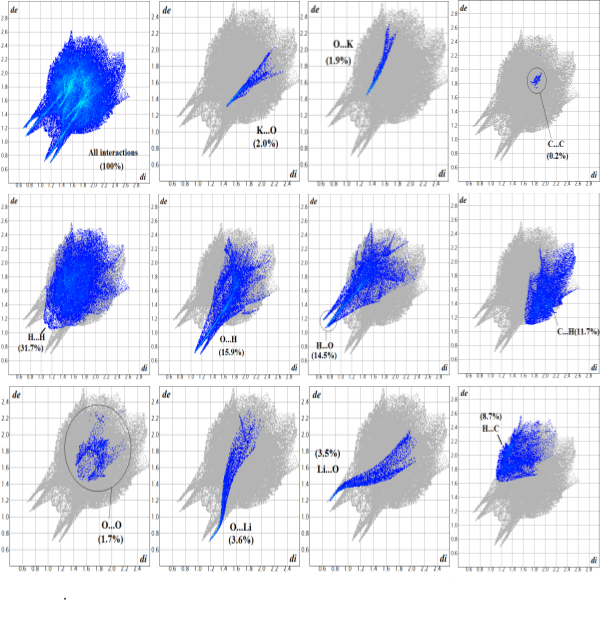