Silicones (polysiloxanes) are widely used inorganic polymers containing silicon atoms. This category includes many other kinds of polymers such as: polysilanes, polysilazanes, polycarbosilanes and polysiphenylenes [1]. In this project we will focus on polysiloxanes: synthesis and structure – properties relationships. First, a brief reference on the history of these materials will be made. Organosilicon compounds were synthesized for the first time in the 1860s, while the first polysiloxanes were made on the 20th century by F.S.Kipping [2].

Then, the ways to synthesize and produce them will be analyzed. This is not a simple synthetic route, while many different procedures take place. These procedures include the reduction of SiO2 into an active reduced form of silicon, hydrolysis/methanolysis and polycondensation or cyclization and polymerization [3].

A more comprehensive study will be made regarding the structure – properties relationships. Different cross linking densities create silicones with different properties. Silicones can be categorized by their cross linking density into: silicone oils, elastomers and silicone resins. Silicone oils are linear polymers synthesized by ring – opening polymerization. They are thermally stable and thus they can be used as heat transfer fluids. Elastomer silicones are cross linked polysiloxanes via vulcanization and can find application in cars and food containers. On the other hand, silicone resins have high cross linking density and as a result they have high thermal stability. For this reason they are used in colors applied in outdoor surfaces while they are also largely used as water repellants [3], [4].

Many different silicon containing polymers had been synthesized in the past (figure 1). The most important category of these polymers is the one of polysiloxanes or else silicones. 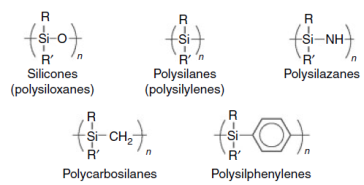 The synthesis of organo – silicon materials started in the 1860s. After 1900s the Grignard reagents became available and as a result major progress occurred. The first polysiloxanes were synthesized by F. S. Kipping in the beginning of the twentieth century. Kipping synthesized diorgano – dichloro – silanes, R2SiCl2, that could be hydrolyzed into R2Si(OH)2. He was expecting that if these compounds got dehydrated they would produce compounds similar to ketones, R2Si = O. For that reason they were named “silic-ones”. Soon he realized that, the products were actually polymers that contained Si-O-Si and not Si=O [2].

Polysiloxanes are considered as inorganic – organic hybrid materials. The main chain is comprised of atoms of Si and O, whereas the side groups are comprised of alkyl groups (figure 2).

Figure 2: Structure of a polysiloxane.

This structure is enough to grant them with excessive properties, thus they can be used in many different applications in our everyday life.

These polymers can be found as silicone oils, elastomers and resins. Silicone oils are linear polymers synthesized by ring – opening polymerization. They are thermally stable and as a result they can be used as heat transfer fluids. Elastomer silicones are cross linked polysiloxanes via vulcanization and can be used in cars and food containers. On the other hand, silicone resins have high cross linking density and as a result they have high thermal stability. For this reason they are used in colors applied in outdoor surfaces while they are also largely used as water repellants [3], [4].

The first step of the synthesis of silicones is the reduction of SiO2 into Si. Usually the reduction is done electro – thermally with carbon (1) and then silicon is converted into SiCl4 with chlorination (2). Otherwise hydro – chloro – silanes can be produced by its reaction with HCl (3).

Really important for the industry is the direct reaction of methyl – chloride with silicon, something that was discovered E. G. Rochow and R. Müller in 1940. Copper is used as a catalyst in the form of CuO, as shown in the reactions (4), (5), (6) and (7).

The main and most important product from this direct reaction is the dimethyl – dichloro – silane, (CH3)2SiCl2. The rest products of these reactions are shown above in table 1.

Table 1: Main products of the direct reaction MeCl with Si.

The next step is the hydrolysis of the dimethyl – dichloro – silane, which results into the formation of HCl and a mix of cyclic and linear oligomers of polysiloxanes. 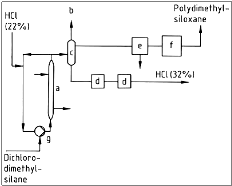 Whereas, in diagram 4 there is a synopsis of the whole procedure including the step of hydrolysis.

During this process a direct recovery of Cl with the form of chloro – methane from the methyl – chloro – silanes takes place. Silanes react with methanol in order to produce oligomers of dimethyl – siloxanes and chloro – methane. Methanolysis occurs according to the reactions:

The process of methanolysis is shown above with a flow chart:

And the reactions that take place are: 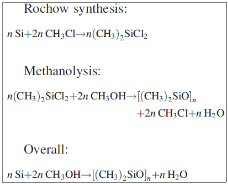 Cyclization needs to take place in order for cyclic siloxanes to be produced. This process is done with the heating of the mixture that was produced during the previous steps with KOH. 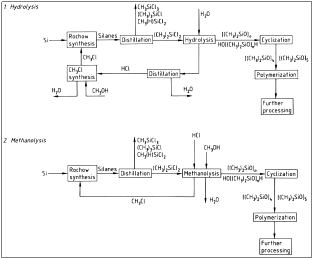 Figure 6:Flow chart of the synthesis of polysiloxanes.

Consists a really important procedure for the industry and alkali metal hydroxide catalysts are used. The usual catalyst is potassium hydroxide, whereas other catalysts can be used according to their catalytic activity: Cs > Rb > K > Na > Li. The polymerization occurs rapidly with the addition of only a few ppm of potassium hydroxide at a temperature above 140 Î¿C. 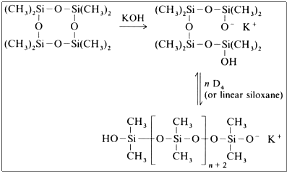 This reaction leads to the formation of mixture of linear silicones with approximately 15 to 18 per cent of cyclic silicones. In the end, the catalyst needs to get deactivated, usually with the addition of phosphoric acids.

Cationic polymerization can occur with the use of strong protic acids or Lewis. The mechanism of this reaction is yet unknown.

Another way to synthesize polysiloxanes is by polycondensation reactions of siloxanediols. Hydroxy – oligomers of siloxanes can be condensated into polymers with higher molecular weight with the loss of water:

Polysiloxanes can be categorized according to their cross – linking density into: silicone fluids, elastomers and resins.

Silicon oils are linear polymers that can be produced by ring -opening polymerization, as described earlier. The flow chart of their industrial production is shown in figure 7. 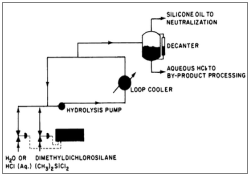 Silicon fluids posses a variety of useful properties, such as:

These exceptional properties is the reason why silicones oils are used so widely. For example because of their high thermal stability they can be used as a heat transfer media in the industry and not only. Moreover, their strong hydrophobicity enables their use as coatings.

Silicones can easily be converted into rubbers through vulcanization. The initial material is a polysiloxane of high molecular weight produced by ring – opening polymerization. Cross linking is essential. This can happen with radicals from the decomposition of organic hyper oxides. The hydrogen atoms are removed from the methyl functional groups and the silixane chains connect with each other with Si – CH2 – CH2 – Si bonds.

In an alternative version of the vulcanization polysiloxanes that contain a small quantity of methyl – vinyl – siloxane groups constitute the raw materials. In order for the vulcanization to begin alkyl-hyper oxides are being used but this time the mechanism is different as shown above: 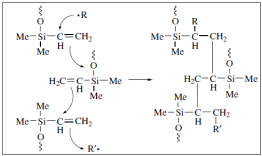 The ultimate tensile strength of these elastomers is low, but it can be improved with the addition of fillers.

Except from the above, there are also silicone elastomers that the vulcanization occurs at room temperature. There are two types of different systems for this, with one component and with two components. For the systems of one component air exposure is necessary. A typical example of this type is being composed by di -hydroxy siloxane oligomers. 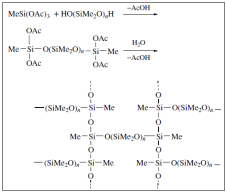 The product of this reaction can be placed into a mold in order to attain the appropriate shape.

Silicone elastomers attain a really high strength at high temperatures. This makes them one of the elastomers that are used in application that require strength into extreme environmental conditions. Moreover, they are and as a result they do not react with many chemicals. For this reason they are being used in biomedical applications, including medical implants.

Products made from silicone rubbers can be found in our everyday life. They are being used into cars, food containers, clothes, electronics and in many other applications.

Figure 10: Different applications of silicone elastomers in our everyday life.

They are cross – linked compounds containing tri – functional (T) and tetra – functional (Q) silicon units (Q). The simplest silicone resins are produced from methyl – chloro – silanes with hydrolysis, either directly or indirectly (after the intermediate conversion into methyl – trialkoxy – silanes).

Silicone resins can be used as additives paints – especially for use in high temperatures. They can also be used as coatings on pharmaceutical pills and as encapsulants for electronic components.

[2] A. Mitra and D. A. Atwood, ‘Polysiloxanes and Polylanes’ Encyclopedia of Inorganic Chemistry, John Wiley & Sons, 2006

[6] R. drake, I. MacKinnon and R. Taylor, ‘Recent advances in the chemistry